The Night Before Review 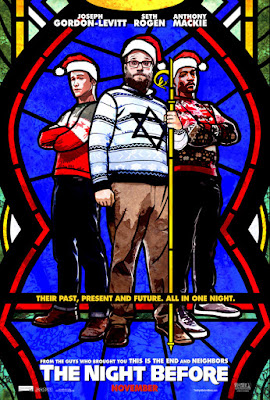 Gazing onto the page on Box Office Mojo dedicated to Christmas movies, one might be shocked to see how few massively financially successful films have been released that center directly on this holiday. Films that use the holiday as merely a backdrop (like Home Alone, Die Hard and Iron Man 3) typically find much greater success in the department of dollars and cents compared to its kin that tackle Christmas head on their plots. The Night Before, the newest Seth Rogen comedy, just so happens to fall into that latter type of Christmas filmmaking.

Even if it doesn't hit the giddy heights of Rogens 2013 effort This Is The End (one of the best comedies of the last decade), The Night Before can still be counted for providing numerous moments of yuletide hilarity and deserves extra praise for the successful way it presents the various characters arcs of its three lead characters, Ethan (Joseph Gordon-Levitt), Isaac (Seth Rogen) and Chris (Anthony Mackie). The trio have been best friends for almost two decades, and ever since Ethans parents were killed in a car accident, they've spent each Christmas Eve since partying and getting into all sorts of mischief in New York City.

My praise for the character work comes with one major caveat; Ethan lacks the kind of distinctive oomph that makes his buddies so much fun to watch. The whole point of Ethans character is that, since his parents passed away, he's been stuck in a state of Arrested Development (Hey! That's the name of the show!) that has prevented him from moving on with his life and committing to his ex-girlfriend Diana (Lizzy Caplan). This isn't a bad idea for a character arc as a basic conceit, but I just wish there was more to him in terms of things like hobbies or interests that the plot could utilize. He's not a bad character, but like I said, compared to his pals he lacks some much needed flavor.

By comparison, it is legitimately interesting to see the inner turmoils of Isaac and Chris come bubbling to the surface as the night progresses. Father-to-be Isaac gets some drugs from his wife Betsy (Jillian Bell) and his antics whilst on mushrooms and other narcotics not only lead to Isaac realize his hidden concerns about being a parent but also offer Rogen the chance to do some hysterical physical comedy. Just try to watch a scene where he freaks out in a Church (which can be glimpsed at in the trailer) and not giggle like a fool.

Chris is stuck with a darker backstory, with his newly garnered fame as a well-known athlete leading him to clash with Ethan. Are these wholly original concepts for character interactions and conflict? Of course not. But the script does a good job of setting up the individual plights of our heroes and all three of the actors at the center of this plot have good chemistry (Levitts got a natural charm to him that helps in dividends compensate for Ethans lack of depth in the script). Plus, the four screenwriters behind this picture (among them regular Seth Rogen collaborator Evan Goldberg and the films director Johnathan Levine) obviously love Christmas themed cinema, given the various nods and parodies of classic Yuletide films that crop up in the film. What a nice change of pace to see well-shots parody sequences with actual thought and affinity put into their execution when put aside the likes of (shudder) The Starving Games.

Their affinity for motion pictures of Christmas past also comes through in the way pathos filled scenes are solidly executed; after all, the likes of It's A Wonderful Life were well-known for their tearjerker scenes, and while you won't be anywhere near "bawling" in The Night Before, there are some sweet moments here that manage to gel well with the raunchy atmosphere of the overall movie. So, is The Night Before an all-time masterpiece? No, but I actually had a lot of fun with both its characters and its frequent laughs, and I could even see holiday themed rewatches of the movie in years to come increasing my opinion of it. And hell, this features worth the price of admission alone for the drug dealer that pops up throughout the plot to lend weed and advice to our three protoganists.
Posted by Douglas Laman (NerdInTheBasement) at 5:47 PM