The First Captain America: Civil War Trailer Brings On The Action And The Emotions 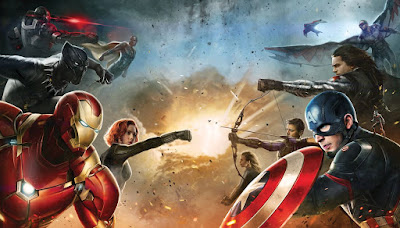 This is another one of those trailers where we should just skip the fancy-schmancy introductions and get right to the meat and potatoes of this whole thing; you want that sweet sweet Captain America: Civil War trailer? Here ya go!

Good God, The Russo Brothers rock, don't they? After crafting some of the best action sequences of recent years in Captain America: The Winter Soldiers, there's already more memorable action beats in this one trailer than there were in some of this years summer blockbusters. The Falcon taking out two guys at once in a single shot? Black Panther(!!!!!!!!!!!!!) going toe-to-toe with Bucky? Captain America holding onto a helicopter for dear life? Oh Lordy, these guys don't seem to have missed a beat.

What's really cool about this trailer in my book is how much it rides on the emotional connections between the characters. There's legitimate sorrow in Tony's voice at the end when he notes how he used to be Steve Rogers friend, and I seriously hope that's the kind of nuanced character related content that carries over into the feature film. Oh, also; how great is it that there's still so much from this movie that we haven't seen yet? Hawkeye is barely in here, and there's nary a glimpse of The Vision, Ant-Man, Baron Zemo or Spider-Man.

Smart move there, as this teaser does an excellent job conveying to general audiences the crux of the movies conflict without overwhelming people with a barrage of characters and events. In short, this trailer rocks, I'm gonna go watch it at least 10 more times, I suggest you do the same.
Posted by Douglas Laman (NerdInTheBasement) at 8:26 AM