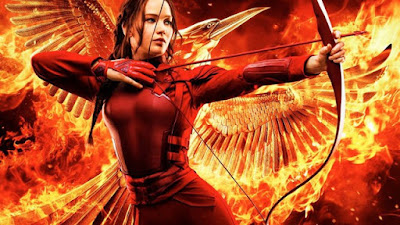 I was quite positive about The Hunger Games: Mockingjay: Part Two in my formal review of it, and for good reason. This is one well-crafted, exceptionally well-acted motion picture that tackles darker themes with surprising nuance. However, it must be said that it's taken back from achieving true greatness because of its last half hour or so, in which (in a shocking twist) the story, and, by definition of this being the last movie in this particular story, this saga, comes to its conclusion, an ending which the film feels like its in all too much of a hurry to get to.

As Katniss and Gale are about to infiltrate President Snows mansion dressed as refugees, a swarm of chaos occurs, as explosions go off and all hell breaks loose. Suddenly, Katniss sees her little sister, Prim, just before various bombs disguised as peaceful airborne supplies go off. Prim is killed in the mayhem and Katniss is knocked unconscious, with flames engulfing her body (which is protected by bulletproof armor), making her, literally, the girl on fire. I do like the meaning behind this overt imagery that's meant to symbolize how, even after how hard she's fought against The Capitol, she's still become The Girl On Fire, the designation given to her by The Capitol when she was nothing more than a marketing gimmick to them.

On the other hand, Prim's demise leaves much to be desired. Yes, the quick nature of her passing is supposed to heighten the sense of "no one is safe", but the slipshod way its shot (if Katniss hadn't called out her name, I doubt I would have recognized it was Prim thanks to awkwardly her moment just prior to the explosion going off in this sequence is executed) took me right out of the movie considering how sharply it contrasts with more professional camerawork of the rest of the movie. From there, more clunkily handled ensures, especially anything involving Katniss and Peeta settling down for a happy marriage. I like the idea that now Katniss has as much psychological scarring from her time as a "symbol" as Peeta has from his experience as a captive of The Capitol, but it feels rushed and a bit more of a downbeat conclusion would have fit into the overall atmosphere of the film better.

But don't worry, I wasn't a total nitpicky scrooge for the final few scenes of this movie. I didn't get a chance to talk about it in my spoiler free review, but Donald Sutherland truly comes alive as President Snow in this movie, a totally chill, totally psychopathic ruler whose scene towards the end where, after being overthrown as ruler of Panem, he and Katniss chit-chat in a greenhouse is absorbing as hell. Ditto for the scene where Katniss publicly executes Snow only to decide to kill off Julianne Moores character Alma Coin. Like I said before, this movie knows how to do build-up, and the way Lawrence and the mounting tension convey all of the inner thoughts of Katniss without ever actually speaking is tremendous to watch, Speaking of Lawrence, the last thing I'll note here is the scene where she breaks down with her cat could have been a laughable attempt at pathos in a lesser movie, but good Lord does Lawrence own the hell out of this scene and make it heartbreaking to watch.

Oh! Almost forgot; yes, I did get a lump in my throat when Phillip Seymour Hoffman first came on-screen. This is the last time I'll ever see him on the big screen and I just want to once again thank this man for all of his incredible performances.
Posted by Douglas Laman (NerdInTheBasement) at 2:15 PM

Email ThisBlogThis!Share to TwitterShare to FacebookShare to Pinterest
Labels: The Hunger Games: Mockingjay Part 2, What A Twist!