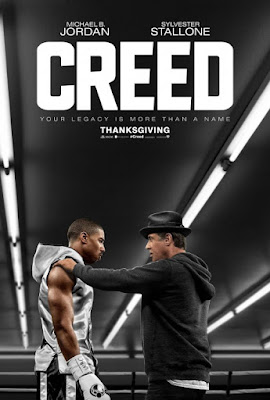 Why, of all sports, does boxing seem to pop up so frequently in cinema? Baseball, football and basketball are the far more popular sports in terms of TV viewers and presence in schools across America, yet, on silver screens everywhere, the primal sight of grown-ups in stripped down attire fighting each other has a far larger presence than any other sport. I have a hunch this is due to the simpler structure of boxing; it's not a team sport, so you only have to concentrate on one individual for an entire story, and the price they pay for participating in the sport of boxing are far more visually overt than the bruises one gets from, say, bowling.

That's all well and good for why boxing remains a recurring cinematic storytelling concept, but of course, boxing alone cannot drive a film. No motion picture knows that better than a little 1976 motion picture Rocky, which turned Sylvester Stallone into a household name and whose everyman underdog hero provided inspiration for viewers in a post-Vietnam world. 39 years later to the weekend, Creed arrives attempting to not only revitalize the Rocky franchise but also hoping to demonstrate what cinematic depictions of boxing can accomplish from a storytelling perspective.

Allow me to simply say this to Creed director Ryan Coogler; on both counts, mission freaking accomplished.

Adonis Johnson (Michael B. Jordan), or Donny, is looking to channel himself into the only occupation he seems to excel at; boxing. It's what his dad (who passed away before Donny was born), Apollo Creed, did, but Donny is looking to blaze his own path with the help of a man who fought his old man back in the day...Rocky Balboa (Sylvester Stallone). That's a tantalizing concept for a feature film continuation of the Rocky franchise, one that takes the world of past movies and could, potentially, take that previously established realm into whole new story directions.

When executing this idea, one of the smartest moves by the films screenplay by Ryan Coogler and Aaron Covington is to make Donny way different from Rocky in terms of personality. Instead of just tossing out a rehash of the original 1976 film, there's different character arcs and themes being tackled by the individuals in the plot of Creed. Donny is a short-tempered but well meaning fellow whose looking for the kind of father figure he never had in his life. By contrast, his coach, Rocky, has lost so many people in his life (among them his wife Adrian) he's hesitant to emotionally connect with anyone again.

Those may sound like opposing character traits may sound too simple to hing crucial moments of the plot on, but lemme tell ya, they work like absolute gangbusters. Rocky Balboa wedged his way as a pop culture icon because of the way he succeeded in spite of his natural vulnerabilities, and it's awesome to see Coogler and Covington remember that important facet of his character and have it be crucial to this tale. Both Donny and Rocky get their susceptibility reinforced and its a pivotal reason why they work so well as both individual characters and bouncing off each other.

Of course, when one is in the ring boxing, you're bound to get some scuffs and bruises that show how vulnerable we as human beings are, and Ryan Coogler shows incredible skill as a director depicting such fight scenes. Intertwining the psychological aspects of Donny with his various brawls makes for some of the more captivating boxing scenes I've seen in ages. Each new fight scene astonishingly manages to top the last, culminating in a climactic duel that'll have anyone with a soul cheering at the top of their lungs.

Much of why these fight scenes are so engaging is due to the aforementioned screenplay (characters hitting each other isn't interesting if there isn't character related content to hinge it on), but perhaps the most crucial element that makes these portions of the film, as well as the motion picture as a whole, so damn enthralling is our lead actor, Michael B. Jordan. There's a convincing determination in Donny's demeanor that makes him easily believable, but this is a character that has to simultaneously convey a damaged air stemming from his complicated relationship with his absent father. Here's a balancing act so daunting many actors might not even attempt it, but goddamn if Jordan doesn't just excel at this role and then some.

Whether the scene calls for him to be gentle, kick some ass or drop a witty barb, Jordan rises up to the occasion and proves himself as a modern day movie star. Creed has tons of virtues apart from its leading man, but I'll be damned if Michael B. Jordan doesn't tie the whole production together. Plus, he's got great chemistry with the terrific Tessa Thompson, who plays his neighbor/singer Bianca (her character manages to further solidify the features theme of vulnerability in a most interesting way). Meanwhile, Sylvester Stallone transitions from the role of leading man to mentor without skipping a beat. There's a spectacular amount of gravitas seeping into Stallone's performance and I doubt there'll be a viewer of this movie that doesn't get choked up in some of his more pathos drenched scenes.

I'm certainly not the first critic to write extremely positive things about Creed, and I'm sure I won't be the last. There's a pretty simple reason for that; Creed is a fantastic movie. Go forth and savor this special feature and all of its numerous glories. Like depictions of boxing in film, Creed is going to be something that's gonna endure for a loooooonnnng time.
Posted by Douglas Laman (NerdInTheBasement) at 10:32 AM