"Don't Be The Hero With Me": Jessica Jones Season 1 Episode 1 "AKA Ladies Night" Review 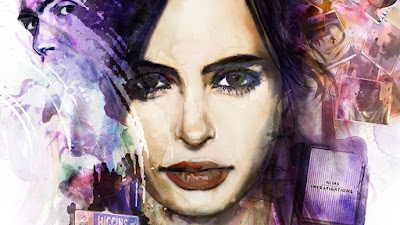 It's fairly obvious that, in translating Hal Jordan to the big screen in the 2011 motion picture/abomination Green Lantern, someone involved in the project saw how successful Tony Stark had become and decided that some of Tonys most distinctive character traits (namely that of his snark and cockiness) should be implanted into Jordan. This, of course, didn't work, for one simple reason; Stark uses his wisecracks as a defense mechanism of sorts, a way to combat the forces around him that he's all too aware he can't control. Plus, underneath all his flippant remarks is a good person, one who, in the first Iron Man movie, plainly says that protecting people with his Iron Man technology needs to be his only purpose in life.

Meanwhile, Jordan is cocky because....it worked for Tony Stark, I guess? Instead of that being only one part of his personality, it's all he has as a character, except for his whiny disposition when he's granted the power of the Green Lantern ring of course. This guys not heroic, funny, likable, interesting or anything, so why should I care about his "devil-may-care" persona? Our titular lead character in Jessica Jones is another shining example of how much Jordan got wrong as a character, as her facetious demeanor could have been grating in the hands of another show, but instead becomes both entertaining as hell and far more emotionally substantial in the debut episode (entitled AKA Ladies Night) of Jones first TV show.

Jessica Jones (Krysten Ritter) works a private investigator in Hell's Kitchen, with her superpowers of super-strength helping her to take down various run-of-the-mill hoodlums and earn up enough money to pay for booze at the end of a long day. Diving into her occupation as a P.I. is where one of the best narrative strokes of this episodes stems from, with Jones being shown to love sleeping in, consuming various alcoholic beverages and actually being good at her job. In her newest assignment of tracking down a missing woman named Hope Shlottman (Erin Moriarty), we get to see Jones utilize her deductive skills to trace down the location of the astray individual.

It turns out, Hope is under the control of Kilgrave (David Tennant), a man with mind control powers that Jones has a history with. I'm assuming this show will treat Kilgrave like Wilson Fisk on fellow MARVEL/Netflix show Daredevil and wait a few episodes until he appears in a physical form, but until then, holy hell does he leave an impression via the PTSD episodes Jones experiences during this story. His murky voice, his creepy mannerisms (he licks Jones ear at one point!) and the way he suddenly appears and vanishes at the drop of a hat. That's a helluva way to introduce this shows main antagonist, as well as give Ritter a chance to show the more vulnerable side of her character.

To utilize that Green Lantern comparison once more, the lowest point for Hal Jordan in his journey is when he quits the whole Green Lantern routine after five minutes, mopes in his apartment while Blake Lively tells him how special he is. Such an endearing character, right? Meanwhile Jessica Jones also finds herself in a low point in this episode, only it arrives when she realizes Kilgrave is still out there after previously believing him to be dead. The lack of hand-holding when it comes to establishing this world allows for expository dialogue to be eschewed and for the viewer to imagine what kind of horrors Jessica must have experienced while under the control of Kilgrave, an approach akin to the constantly unseen shark in Jaws.

It's a bold storytelling move to just toss the audience into this world, but it's all told in a captivating manner via Melissa Rosenbergs writing and the direction of SJ Clarkson, both individuals who bring an obviously noir inspired approach to the shows visuals and characters (Jones has various inner monologues throughout the episode) that's so exquisitely realized it would make Tracer Bullet proud. But the real MVP of this debut episode is Krysten Ritter, whose performance in the aforementioned scene where she discovers Kilgrave has returned alone is enough to warrant massive amounts of praise. Few actors could make a character so reliant on susceptibility and relentless credence so cohesive and engrossing, but Ritter pulls it off and then some. Something else to admire about AKA Ladies Night? The way it works as an excellent introduction into the bleak world of Jessica Jones while also serving as a top-notch standalone piece of riveting storytelling. Hell, Krysten Ritter alone has got me itching to see the rest of this season and see her team up The Avengers in the near future.
Posted by Douglas Laman (NerdInTheBasement) at 1:15 PM