The Tomorrow War in an unpleasant tour of action blockbuster filmmaking 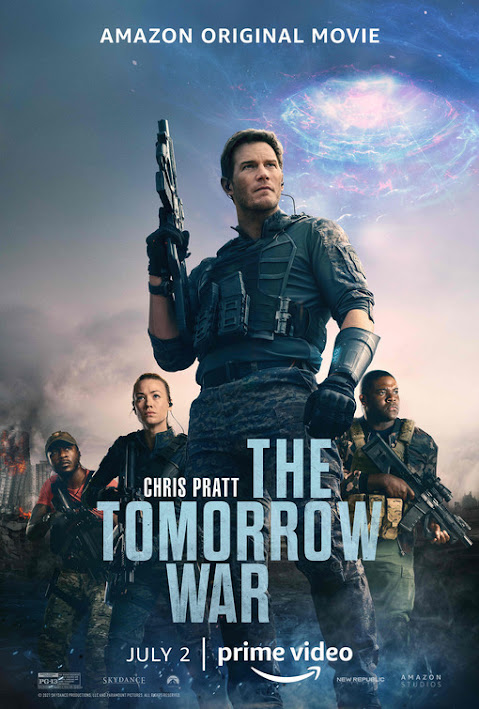 Long runtimes can get a bad rap. In the hands of the right filmmaker, a prolonged runtime can ensure that a movie has enough room to breathe, that its ideas get fleshed out to their maximum potential. Filmmakers like Masaki Kobayashi and Chantal Akerman, just to name a few, have created narratives that use extremely lengthy runtimes to channel unique facets of the human experience.

But a movie like The Tomorrow War, which concerns Chris Pratt being sent to the future to blow up aliens, should not be a lengthy feature. It should be an 80-90 minute, tops, B-movie exercise. Running 140 minutes with credits, The Tomorrow War is an excruciatingly overlong endeavor, more of a chore than a cheer-worthy summer blockbuster.

The Tomorrow War stars Pratt as Dan Forester, the beefiest science teacher you’ve ever seen. He lives a nice but not especially exceptional life in the suburbs. That all gets upended once humans from the year 2052 arrive to deliver devastating news: the Earth is under attack in the future. The human population has dwindled so heavily that people from the past are being called upon to fight for humanity. Forester is recruited in “the first-ever worldwide draft” and is subsequently sent to the future to fight the aliens wrecking the planet.

What follows is just a string of boring set pieces that never figures out a concrete character thread for Forester to navigate during all the shooting. Like most other major American blockbusters, daddy issues factor hard into the proceedings. Our lead character has problems with his father, James (J.K. Simmons), while the prospect of saving the world for his daughter informs Forester’s gung-ho nature in combat. All of that, and any other surface-level attempts at characterization, get jettisoned once the action-heavy sequences fire up.

The Tomorrow War is an exercise in watching money burn as director Chris McKay and writer Zack Dean keep churning out new set pieces that clearly cost a lot of money but have zero imagination to speak of. The aliens look like the Cloverfield monster got crossed with the otherworldly beings in Edge of Tomorrow. Meanwhile, a sequence where they attack an oil rig retrofitted into a command center see’s them acting like water-bound versions of the World War Z zombies. All the while, there’s no real excitement to speak of, no characters to get invested in, no unique visual flourishes to liven the mood. They’re all rendered with zero personality, all that cash in the service of total creative emptiness.

The only distinctive trait in the script is its weird obsession with human suffering. As Forester and his fellow time-traveling soldiers first arrive in the future, the camera lingers as some of these poor souls plummet to their deaths in the fiery debris below. This emphasis on just watching pointless anguish continues as McKay lingers on the screams of people being torn apart by aliens. There’s also an uncomfortable fixation on women getting slaughtered to help further motivate male characters. It’s hard to get invested in the fight for humanity when The Tomorrow War doesn’t see humanity as much more than just cannon fodder for extra-terrestrial adversaries.

Beyond that, McKay and Dead don’t take any risks whatsoever in the story or in how it’s presented. Several of the usual clichés of any time travel movie get trotted here with no sense of inventiveness. Meanwhile, the backdrops for this movie’s action scenes range from sterile labs to abandoned hospitals to CGI exterior landscapes. They’re all cheap-looking as they are distractingly reminiscent of environments from other superior films. The Tomorrow War doesn’t dare to imbue any sense of unique identity into its generic action movie, it just settles for looking low-budget and derivative.

One could be here all day prattling off the problems with this movie, including lines of dialogue in the first act that are way too obviously getting paid off in the third act. There are also severe shifts in tone that see cartoony gags (like one recruit for the future war showing up in a chef’s hat) getting accompanied alongside brutal sci-fi violence. Neither end of Tomorrow War’s tonal spectrum is interesting, leaving this a movie that’s trying to please everyone but managing to just disappoint everyone instead.

Headlining the whole thing is a wasted cast, with J.K. Simmons and especially Betty Gilpin getting criminally little of substance to do. Worst of all, though, is how Chris Pratt is once again inhabiting a generic action movie lead role. As Jurassic World and Passengers showed, these parts do not allow him to indulge in his better traits as a performer. Saddled with such a poorly written character, Pratt is a total blank slate as boring as the rubble-covered future environments he inhabits. Sam Richardson scores a few chuckles as Forester’s best friend, but his puzzlingly prolonged absence from the middle of The Tomorrow War robs the movie of its best acting asset.

The best way to describe The Tomorrow War is that it’s miserable, just an utterly unpleasant experience through and through. It’s a spiritual successor to Battle: Los Angeles in being a bunch of ugly-looking noise that seems to stretch on for an eternity. There isn’t an ounce of heart or fun or ingenuity in here, a sharp departure from Chris McKay’s work on the excellent The LEGO Batman Movie from 2017. Though its primary setting is the world of the future, The Tomorrow War is a movie ripped straight out of yesteryear.