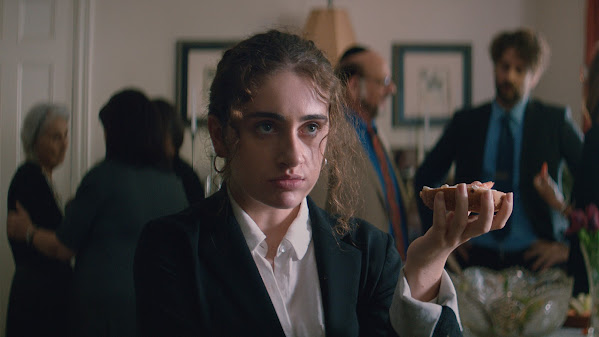 I simply don't have the time anymore to deliver regular 1000-ish word reviews for every movie I see like I did as late as a year ago. But a few weeks back I did a piece where I delivered bite-size versions of my usual movie reviews for some titles I recently watched. That was fun to do and since I have some free time on this Sunday morning, I thought I'd give that another go for some films I watched for the first time in the last two weeks. Starting this edition off is one of 2021's very best movies yet, comedy or otherwise.

If anyone ever asks me "What's it like to go to a big social gathering when you're on the autism spectrum?", I'll point them in the direction of Shiva Baby, that'll vividly answer that question. Writer/director Emma Seligman's filmmaking, which emphasizes droning noises in mundane conversation and close-ups that instantly instill claustrophobia, perfectly captures what it's like to be overwhelmed in overstimulating social scenarios. Even beyond me relating deeply to Shiva Baby, this is still a great comedy that packs a lot of personality, humor, and depth into just 78 minutes of screentime. Seligman isn't afraid to embrace the messy and that makes the characters in Shiva Baby feels so richly alive. The whole cast is great but props to the always reliable Fred Melamed for delivering yet another memorable supporting turn as the protaganists father.

Writer/director Paul Schrader has a fixation on sex, which is nothing new for an American filmmaker. But what I'm intrigued by in regards to Schrader is his fascination not just with sex, but how taboo quality of sex simultaneously is soul-crushing but also part of its fun. Bob Crane, the real-life figure chronicled in Auto Focus, doesn't feel shame about his sexual exploits but there's also the sense that doing it in secret, that's what's part of the excitement, the titillation for him. It's why he kept those old nudie magazines around in his garage for so long, the thrill of possibly getting caught is as much a part of the experience as anything else.

In his best works, there's a thoughtful quality to how Schrader explores sexual desires and that's certainly the case with Auto Focus. It's a compelling work that gets a lot of mileage out of how Greg Kinnear is perfectly cast as Crane. Kinnear has always done good work in blending a whole exterior with a smarmy interior and he puts that to great use in portraying Crane. Willem Dafoe also delivers exceptional work as a guy who wants to be seen as the fellow with all the answers but really just wants somebody to be his friend. The underlying tragedy of the proceedings gets more and more apparent until Schrader ends Auto Focus the only way it can conclude: bleakly.

I love to watch bad things happen to rich people so David Fincher's The Game was basically like porn for me. In all seriousness, this is an extremely enjoyable production that does what any good thriller should: keep you guessing. I genuinely had no idea just what could be going on, who Michael Douglas's protagonist could trust, how much money he did or didn't have. Fincher keeps us guessing constantly and the creatively over-the-top scenarios The Game keeps placing its lead character in (I love just the look of his mansion all spray-painted) kept me riveted. Just a great thriller and another sign of how Fincher is one of those sublime dramatic filmmakers who also knows just how to make crowdpleaser genre fare.

Before Anthony Hopkins and Mads Mikkelsen, there was Manhunter. The first feature-length adaptation of Thomas Harris's Hannibal Lecter character, this one draws from the novel Red Dragon. It's fascinating to watch this in 2021 and see how this clearly came before Lector turned into a household name. Brian Cox's take on the cannibal really isn't a huge part of the story, he's just another part of the cast. The real star here is Brian de Palma's bold visual choices, which show such thought and care. One could pore over the color choices here alone and never get bored. The fact that there's actually a compelling mystery at the heart of Manhunter too ensures that this movie is so much more than just a precursor to later pop culture adaptations of the Lecter character.

Director Ali Folman uses the animated documentary Waltz with Bashir to come to terms with his past. Folman has gaps in his memory regarding his time as a 19-year-old soldier for the IDF in the Lebanon War. He then proceeds to interview friends and other people who fought in the conflict, all of who begin to chisel away at Folman's personal recollections of these events. Waltz with Bashir masterfully uses the art form of animation to take Forman and viewers closer to the truth, with this accomplishment rendering a closing cut from hand-drawn visuals to real-life footage all the more powerful. It's hard to even know what to say about a film this impeccably made and harrowing beyond the fact that it's fascinating on a psychological level to watch people like Folman come to terms with a past they'd tucked away so deep in their brains.

Weird to think how Aaron Seltzer and Jason Friedberg basically destroyed the spoof movie and then slated the ground of this genre between 2006 and 2010, I mean, they just annihilated the concept of this subgenre being taken seriously. In the same time period, though, Walk Hard and Black Dynamite reinforced the validity of the spoof movie and even suggested how it could be infused with vibrant new life. What a shame Seltzer and Friedberg works like Disaster Movie had to ruin all the fun. At least we'll always have Black Dynamite, an absolutely hysterical pastiche of Blaxploitation films. There are too many good gags in here to count, but Michael Jai White's dialogue deliveries are especially superb. He handles the most absurd dialogue with self-seriousness (like any of his lines about orphans) that just can't help but tickle your funny bone.

Posted by Douglas Laman (NerdInTheBasement) at 10:39 AM