The Forever Purge does feel like it goes on forever 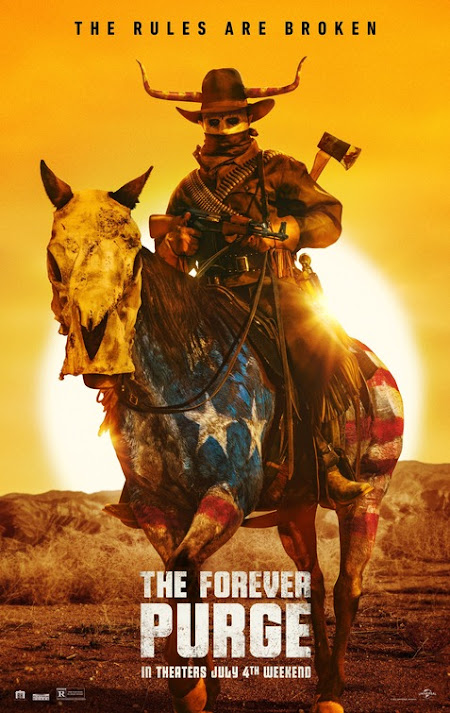 Amusingly, The Forever Purge begins by immediately discounting the events of The Purge: Election Year. That film's presidential candidate protagonist, who won her election on a platform to end The Purge, apparently is gone. The political group The New Founding Fathers have been put back in charge and have reinstated The Purge. The Purge: Election Year is now like the Armin Tamzarian thing on The Simpsons, it's like it never even happened!

Anyway, The Forever Purge is set in Texas as a new Purge gets underway. with Juan (Tenoch Huerta) working on a ranch for kindly rancher Caleb (Will Patton) and his far less kindly son Dylan (Josh Lucas). Juan is getting adjusted to living in America with the help of his wife, Adela (Ana de la Reguera), a task made difficult by all the rampant white supremacism in America exacerbated by the Purge. The morning after this year's Purge event is over, Juan and Adela return to their respective jobs only to learn that some people have decided the Purge doesn't have to end. They've kicked off The Forever Purge (hey, that's the name of the show!) and are killing anyone they see as failing to fit their profile of "proper Americans." It's a rush for survival, with former revivals like Juan and Dylan needing to work together to survive the mayhem.

Let's get it out of the way first and foremost: it's utterly ridiculous that writer James DeMonaco has opted to make half of the six lead characters in The Forever Purge rich white people. These Purge movies finally got good with The First Purge by solely focusing on the marginalized groups most impacted by the titular event. DeMonaco's screenwriting takes a step back in the effectiveness of its sociopolitical impact by focusing The Forever Purge on tedious characters like Dylan. Such figures go through run-of-the-mill character arcs related to learning that prejudice is actually bad, a process Juan and Adela handhold these characters through. As a result, Juan and Adela rarely get to stand out as their own individual characters, they're just only around to help white people get out of danger. And that's not even getting into the movie's weird obsession with lingering on Latinx characters in pain or dying.

It also must be said that DeMonaco's depiction of bigotry in The Forever Purge feels out of touch with reality circa. 2021. Terrifying racist people aren't cartoonish burly men with Nazi swastika face tattoos. They're men in polished suits who hold high political power and try to argue that trans people are inherently predators or that critical race theory is the work of Satan. By concentrating bigotry in such caricatured figures, The Forever Purge lets its most privileged viewers off the hook. The feature is practically cradling the cheek of white viewers and reassuring them that, as long as you don't have a swastika tattoo on your face, you couldn't possibly contribute to institutionalized racism.

As a sociopolitical text, The Forever Purge is a total mess, which is a problem you inevitably run into when you keep highlighting white perspectives above all others or refuse to even hint at capitalism as a factor in the problem of financial inequality. How is it as a horror or action movie? On both fronts, The Forever Purge is lacking. The only time it even attempts to be a horror film is through dumb fakeout jump scares, a cliche we need to hide away in a locked box. Otherwise, The Forever Purge isn't scary, even the mask designs are pretty forgettable this go-around. Nobody's gonna be dressing up as these Purge foes at the next comic convention, I'll tell you that right now.

As an action movie, though, it fares a bit worse, mostly because director Everardo Valerio Gout just can't film any of the action sequences properly. All the hand-to-hand tussles are edited to pieces, it's hard to make out what's going on most of the time, and even the kills are pretty lazy, a waste of the grisly opportunities afforded by the R-rating. Failing to engage the brain, quicken your pulse, or just deliver some mindlessly fun action beats, The Forever Purge doesn't have much to offer besides Huerta and de la Reguera being worthy of headlining way better features than this. I guess The First Purge was just a fluke in this largely lackluster franchise since The Forever Purge takes things almost back down the quality levels of that disposable original Purge film.