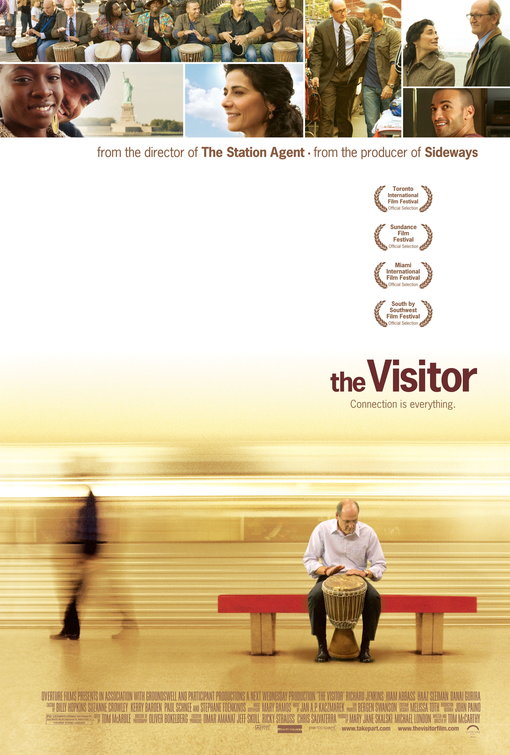 Tom McCarthy has always had an empathetic streak in his works. It's an ingredient that proved essential when he was one of the screenwriters crafting the journey of cantankerous Carl Fredrickson in Up and it added extra layers of distinctive emotional heft to his underdog sports story Win Win. Even his Best Picture winner Spotlight, with its appropriately bleak tone, extended humanity to its principal characters and to survivors of sexual assault. McCarthy's always found a knack for emphasizing the humanity in everyday people without sacrificing the brutal harshness of the reality said people inhabit.

This gift is on full display in The Visitor, which centers on Walter Vale (Richard Jenkins). A college professor, Vale is living life in a state of displacement. McCarthy gradually reveals that Vale is still reeling from the passing of his wife, with this tragedy leading him to become withdrawn from others and his job. While being sent to present an essay at a conference in New York City, Vale's life gets turned upside down when he gets to his NYC apartment and finds two people, romantic couple Tarek (Haaz Sleiman) and Zainab (Danai Gurira).

From here, The Visitor becomes about the simple interactions between Vale and these unexpected guests that give birth to a quietly important friendship. McCarthy recognizes the importance of those small throwaway moments in everyday life that cement a meaningful bond. It's also nice that the story eschews the easy path of orienting Vale's growth as a character on overcoming racial prejudice. Rather than reducing Tarek and Zainab to being props to foster personal growth on the part of Vale, they're all equal players in the story as Vale navigates the prospect of finding human connection in the wake of tragedy.

The story takes on a darker turn midway through the runtime when Tarek gets arrested by police and, being an illegal immigrant, is detained in a detention center. This is where McCarthy's proclivity for depicting reality without the edges sanded off comes in handy. Wisely eschewing showing Tarek being brutalized, the focus remains on Tarek's conversations with Vale as he talks about the cruel injustice of his life being wiped out in the blink of an eye. Having the detention center walls be lined with cutesy posters espousing the virtues of immigrants is a fantastic quiet detail that intentionally gets your blood boiling.

By the end, there's even an appropriate simmering rage and frustration at how modern America treats these members of the population. A fantastically realized climactic scene demonstrates the disparity between how Vale and Tarek's mom (played by Hiam Abass) react to this reality.  For Vale, seeing how America dismisses the humanity of immigrants inspires shock and horror. He's heard about this hardship, but being confronted with it for the first time physically, it's shaken his whole world. For Tarek's mother, though, there's a resigned but no less devastating nature to her response. She's always been aware of this being the reality. "It's just like Syria," she murmured earlier, a sentiment echoed here in this tragic sequence.

It's a subdued but powerful moment in a film full of such quietly detailed sequences. The friendships between the characters in The Visitor are just as vividly realized as the moments of tragedy reflected deep flaws in America. All these tonal up's and down's are handled gracefully by the cast, particularly Jenkins. Throughout his career in projects like The Shape of Water and Olive Kitteridge, this actor has demonstrated a gift for handling men who have all this pent-up emotional turmoil just stewing inside. That trait is perfectly applied to the character of Vale, especially in earlier scenes where Jenkins hauntingly but subtly conveys this character as a shell of his former self. Jenkins is perfectly cast in The Visitor, a movie that makes great use of writer/director Tom McCarthy's gift for empathy.