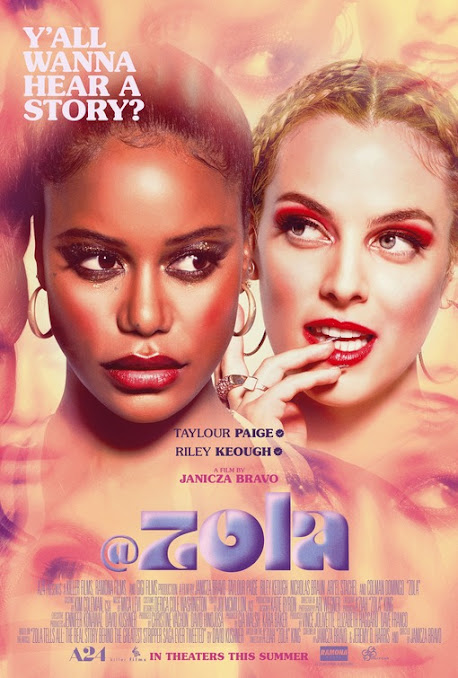 In doing a reflective review of the sketch comedy show I Think You Should Leave, Wired writer Peter Rubin noted that the appeal of this show, beyond it just being hysterical, was how its humor revolved around the concept of insincerity. To Rubin's eyes, You Should Leave "isn't just a distillation of our personal insecurities, it's a condemnation of facade. It's an antidote, in other words, to the internet itself." I was thinking of that while watching Zola, a film adapted from a Twitter thread chronicling a couple of unbelievable days in the life of one woman. False identities run rampant all over the interwebs. Zola is about the inevitable horrors that unfold when all that deceit goes unchecked.

Aziah "Zola" King (Taylour Paige) works part-time as a waitress and a stripper, with the former job being the place where she meets Stefani (Riley Keough). The two immediately hit it off and have a great time hanging out that evening. The next day, Stefani offers up Zola a chance to make some money doing some dancing in Florida. Not one to pass up the chance for some cash, Zola decides to join the adventure. This is where the trouble starts to come in. From the start, nothing is as it seems, with more people, like the controlling X (Colman Domingo), coming along for the ride. Then there's the fact that Stefani expects Zola to do more than just dance in their time in Florida.

What follows is a barrage of twists and turns that understandably informed a great Twitter thread and have now informed a standout movie. Zola screenwriters Jeremy O. Harris and Janicza Bravo (the latter of whom also directs) brilliantly use the fact that this whole story went viral on Twitter as an excuse to add little flourishes throughout the movie that lean on modern technology. The "ding" of an iPhone text tone is used to signal time shifts in the story while a volume bar is used to signify when Zola is tuning out surrounding conversations. Rather than tut-tut over the modern ubiquity of phones, Zola embraces them as ways to reflect the unique world of its protagonist.

Even beyond references to iPhones and social media, Bravo revels in a stylized sensibility that's perfect for the story at hand. The strumming of harp strings humorously accompanies moments of bonding between Zola and Stefani. Meanwhile, a fantastically realized fantasy scene where Zola contemplates who she'll be on-stage uses a quartet of reflections and rapid costume changes to vividly convey her interior desires. Much like Paul Verhoeven with Showgirls, Bravo realizes she's handling material so unbelievable that you need a heightened aesthetic to make it digestible. Her filmmaking is so unique, a fantastic blend of style and substance.

On the topic of substance, Zola is centered on exploring the ways women of color are treated as objects by society at large and especially by white people. This is exemplified by Stefani, who braids her hair in dreadlocks and peppers her conversations with pieces of Black slang. She sees the culture of Black women as something she can pick and choose from as she pleases while seeing actual Black women like Zola as just objects she can manipulate to her own needs. In Zola, racism isn't depicted necessarily as someone who has a hate symbol tattooed on their body but is thoughtfully (and accurately) rendered as white people who see Black people and culture as something to be exploited.

This theme is most vividly conveyed in a meta-sequence where Stefani gets to tell her own version of the film's events, apparently based on the real Stefani's recounting from a Reddit post. In the eyes of Stefani, she's now painted as a perfect savior while Zola is depicted in a variety of stereotypical outfits and poses reminiscent of how so many feature films consciously choose to depict Black women. The massive gulf in accuracy between this account and what Zola depicts as the truth is subtly but impactfully conveyed. In this scene, Bravo pointedly uses cinematic language used to demean Black women to show how out of touch with reality such stereotypes, as well as people like Stefani, are.

Stefani's warped retelling is a standout sequence in a movie chock full of memorable moments, with other unforgettable traits including a cast packed with terrific performances. Taylour Paige is especially impressive in her first lead role as Zola and she proves especially great at subtly conveying her bewilderment at everything happening around her. As for Riley Keough, she's unrecognizable from her prior performances in her gusto turn as Stefani. In her multi-layered and unpredictable turn, Keough embodies the sort of treachery that defines so much of the internet and informs the thematic crux of the impressively unique Zola.

Posted by Douglas Laman (NerdInTheBasement) at 10:42 AM