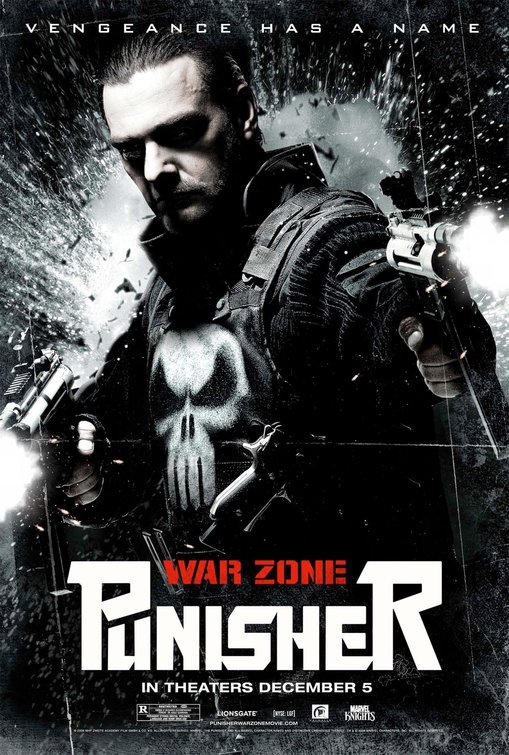 I'm not sure The Punisher can work as the lead of a movie. I will never say something is impossible to translate to the screen but he seems like a character, like The Hulk, that works better in an ensemble or as an adversarial force rather than as a straightforward protagonist. The concrete never-wavering personality of The Punisher can just get old if you're stuck with him for two consecutive hours. It's more interesting to see people respond to his bleak and violent worldview rather than just immersing wholesale in that glibe perspective. But if you're going to do Punisher solo outings, Lexi Alexander's 2008 movie Punisher: War Zone is as close to an ideal version of that as you can get.

Most superheroes have a code of honor preventing them from killing. The whole deal with Frank Castle (Ray Stevenson) and his alter-ego The Punisher is that all he does is kill. Living in New York City, he targets all kinds of vicious gangsters, the same kind of criminals who shot down his wife and kids. While slaughtering a gaggle of high-end crooks, Castle makes a relentless new enemy in Billy Russoti (Dominic West), who gets his face mangled beyond recognition while fighting The Punisher. Now going by the name Jigsaw, Russoti swears vengeance on Castle just as this vigilante, after accidentally killing an FBI informant, believes he's no longer a useful weapon against evil.

Just because Punisher: War Zone is a better iteration of what a Punisher movie could be doesn't make it perfect. For one thing, the characters of Julie Benz as Angela Donatelli (Julia Benz) and Grace Donatelli (Stephanie Janusauskas) feel out of place. Like everyone else in the cast, they're broad caricatures, in this case of a grieving widow and a cutesy kid. Neither of them are all that interesting in their personalities and their generic nature makes them seem as if they slipped in from another movie. The same can be said for some cop characters who could could have waltzed out of any procedural drama on TV.

Meanwhile, a plot thread about Castle feeling guilt over killing that FBI informant also comes in and out of the movie sparodically, as if a remenant from an earlier version of War Zone that wanted to be more like a traditional superhero movie. On the other hand, where the movie really succeeds is in being a grimy throwback to 1980s grindhouse fare. Castle lives in a bleak vision of the underbelly of New York City that has never really existed but certainly looks distinctive enough. Every building has bright neon lights that crackle, night seems to last for days on end, Russoti just struts down the street with his torn up mug with nobody batting an eye. It's a vision of the Big Apple residing somewhere between Taxi Driver and a Dick Tracy movie. I can groove to that.

Such a vision of this city aligns with the stylized tendencies of the violence, which also fit squarely with the movies Alexander is homaging. People don't just die by Castle's hand, they explode while doing parkour. Heads get squelshed, blood splatters, it's all so ridiculous and violent. If this kind of action isn't your cup of tea, Punisher: War Zone will be relentlessly unpleasant. I was able to get on its wavelength, though, and found the film to be consistently fun. It helps that there's no fat on the bones here, no dumb convoluted B-plots to drag out the runtime. Punisher: War Zone knows what it wants to do and it does all that in a concise fashion.

Plus, executing all the violence at this cartoony midnight movie level makes the character more digestable. That stylized quality is especially apparent in the acting, everyone in this movie is acting with maximum over-the-top silliness. Doug Hutchison's Looney Bin Jim, for example is loaded with puns tie to the graphic violence he dishes out. These include one enjoyably bizarre fun fact about Swedish cooking that he dishes out just before devouring a man's innards. Just as strange as all that is the unabashedly overt Italian accents donned by the majority fo the gangsters, including Jigsaw. Stevenson's square-jawed take on The Punisher stands out as even more restrained compared to all these wacky foes.

I'm still not convinced The Punisher is prime leading man material when it comes to comic book movies. But credit where credit is due, Punisher: War Zone makes an impressive case for the character being able to sustain an enjoyable and gnarly B-movie, one whose willingness to get ridiculous is incredibly admirable.