Thanks to Florence Pugh and vulnerability, Black Widow packs an enjoyable punch 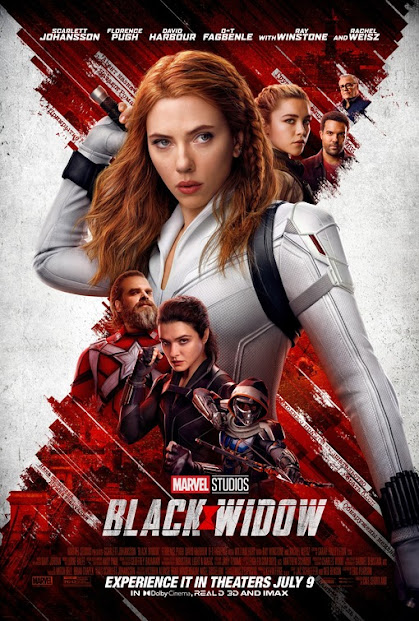 It's not revelatory to say but this should have happened a long time ago.

A Black Widow solo movie not happening back in Phase Two of the Marvel Cinematic Universe is a microcosm of misogyny in the film industry. A standout member of The Avengers who keeps stealing scenes in Captain America sequels, how do you not give her a movie? Instead, it took Marvel Studios 11 years to figure out women could headline films as capably as raccoons and beefcakes named Chris. Finally, after all this time, Black Widow makes it to the screen, through a solo movie directed by Cate Shortland. The sensation that we should've seen this a long time ago is impossible to shake, but at least the movie we've got now is a pretty fun spy movie.

After a brief detour into 1995, Black Widow picks up right after the events of Captain America: Civil War, with Natasha Romanoff (Scarlett Johansson) on the run from the U.S. government. With her Avengers found family disbanded, she just needs a place to lie low. That plan gets derailed once it turns out Dreykov (Ray Winston), the man who trained Romanoff to be an assassin in The Red Room, is alive. Not only that, but he has sent out master assassin Taskmaster to hunt down a collection of vials that would prove fatal to Dreykov's operation. To stop him, Romanoff will have to unite with her former adopted sister, Yelena (Florence Pugh), as well as other figures from her old life like Alexei (David Harbour) and Melina (Rachel Weisz).

A welcome surprise regarding Black Widow is that it actually feels like a thematic successor to Shortland's 2012 movie Lore. Both features are about human beings navigating what it means to exist and what their worldview is in the aftermath of their status quo's collapsing. Lore went in a bleak direction in exploring what a teenage girl does when Hitler's regime falls. Meanwhile, Black Widow, being a movie aimed at 10-year-olds released by Disney, is slightly more optimistic in exploring this theme. Here, the concept manifests in how Romanoff and the other three principal characters respond to being involved in an organization that kidnaps and trains young girls to be killers. The concept of women working together is depicted as a critical tool to help create a better tomorrow and evolve from the past.

Shortland's experience with this theme means it gets rendered with welcome nuance here, with this notion providing a solid thematic foundation for Black Widow, particularly in the great dynamic between Natasha and Yelena. Of course, that rapport is also helped by the performer in charge of playing the latter character. As shocking as Governor Greg Abbott being racist, Florence Pugh is terrific in an on-screen performance. In a movie full of master superspy's, she lends a distinctly human point-of-view to everything, including in her observational gags (like her line about Natasha's "posing") or in her extremely well-realized moments of vulnerability.

Come to think of it, vulnerability is actually something Black Widow does quite well as a whole movie. Dating back to the days of Iron Man, when the Marvel Cinematic Universe had to lean on conversation-heavy sequences because they didn't have the budget for wall-to-wall spectacle, these movies have often found time for surprisingly affecting moments of human connection. Black Widow nicely continues that tradition with various low-key conversational sequences that get to the heart of the lingering pain these characters carry and the messy ways they're coping with that turmoil. There's usually a joke or a punch waiting around the corner to make sure things don't get oppressively bleak, but scenes like Yelena and Alexei's father/daughter "chat" have enough insight to make these characters feel like people.

Of course, this is a summer blockbuster, so it isn't all laidback conversations. There is also a bunch of action sequences to lure people into movie theaters. On that front, Black Widow is quite fun, Shortland and the second unit directorial team come up with a bunch of exciting fights that nicely vary in geography and backdrops. An early kitchen scuffle between Natasha and Yelena is especially fun, love the way they kept creating weapons out of household objects just lying around. CG elements can be distractingly incorporated into the proceedings, including in some green-screen work in the climax. On the other hand, the practical sets utilized in sequences like a snowy prison break help to reinforce a tactile quality to the various fistfights. Most of our lead characters are just normal people, after all, and it's nifty that Black Widow's exciting chases and fights find ways to reinforce that.

As a nice cherry on top of Black Widow, Lorne Balfe also delivers an exceptional score. I'll freely admit his prior compositions have rarely stood out to me (including his recent work on The Tomorrow War), and the idea of Balfe replace someone like Alexandre Desplat late in the film's post-production set me up to expect a rushed collection of orchestral tunes. But much like Hans Zimmer on Blade Runner 2049, Balfe's Black Widow work is good enough to make you believe he was always the first composer choice. I especially love his theme music for Taskmaster, with a grand baritone choir. It's so committed to sounding stereotypically Russian that it comes back around from being goofy to actually intimidating.

Black Widow isn't groundbreaking, to be sure. We've certainly seen more subversive takes on the spy movie genre and Eric Pearson's screenplay has its share of flaws (like early scenes too heavy on exposition). Thankfully, the movies entertaining enough to ensure that these are not a major problem. In particular, I found myself quite moved by how the finale of Black Widow isn't about blowing up cities or hunting down space rocks but rather emphasizing the importance of women working together. What a shame it took such an excessively long time to get here since the Black Widow movie turned out to be an extremely enjoyable popcorn film.

* I want a whole Disney+ series about Rachel Weisz and her hogs.

* David Harbour is a whole lot of fun as Alexei. Between this and No Sudden Move, Harbour is cornering the market on middle-aged guys who just can't do anything right.

Posted by Douglas Laman (NerdInTheBasement) at 8:27 AM