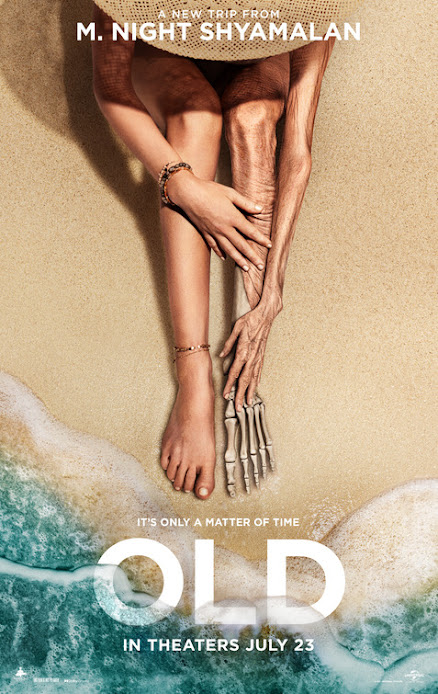 Guy (Gael Garcia Bernal) and Prisca Cappa (Vicky Krieps) are so excited about this tropical vacation. As Old begins, the two set off with their kids, Trent and Maddox, to a resort that Prisca stumbled onto totally by chance. While there, the head of this peaceful domicile encourages the family to travel to a secluded beach like no other. Up for an adventure, this family packs up and heads to this location. While there, things initially seem to be just fine until a dead body washes ashore. After this revelation, it turns out that this isn't just a run-of-the-mill beach. This is that beach that turns you old from the movie Old! Trapped, the Cappa family and an assortment of other characters are now figuring out how to escape while dealing with the horrors of aging.

I've seen a lot of people describe Old as the best and worst of M. Night Shyamalan as a filmmaker and I'm inclined to agree with them. On the worst side of the equation, Shymalan's proclivity towards dialogue that's about as subtle as four sledgehammers hitting your head at once is here in spades. It's especially apparent in the first act as Shyamalan blazes through introducing our central characters. Folks like Jarin (Ken Leung) will just spout awkward expository phrases that no human being would ever utter, all with extra odd line deliveries as a cherry on top. An argument between Guy and Prisca is another great example of this flaw, as the duo practically turn to the camera and spout their problems with the other person.

Trent, meanwhile, is one of those precocious movie kids who talk like a grown-up as he prattles on about "mortgages" and other entities no five-year-old would have any interest in. It's a groan-worthy stereotype used here only to blatantly set up Chekhov's Guns that Shyamalan can pay off later. All of this ham-fisted dialogue would be a problem in any context but it's especially peculiar in sequences attempting to establish a sense of everyday normalcy the rest of the movie can undercut. That having been said, much of this bad dialogue is totally hilarious and echoes the kind of lines you'd find in an Ed Wood movie. So clumsily-written and spelling out everything for the viewer, yet delivered without a trace of irony.

This makes the clumsy dialogue unintentionally humorous and it frequently remains that way for the rest of the runtime. To Shyamalan's credit, though, this style of writing actually fits better once the characters in Old realize what kind of beach they're on. There's still plenty of overly obvious lines to go around but the abject nature of some of these exchanges actually feels appropriate for the unnerving scenario the Cappa family and everyone else has found themselves trapped in. It's an unorthodox style of speaking for an unorthodox situation. It doesn't always click like that but the instances where it does, like a suddenly twenty-something girl wistfully mourning how she'll never see her prom or graduation, are surprisingly effective.

Plus, once all the aging shenanigans get into motion, the focus on Old goes from tin-eared expository dialogue to M. Night Shyamalan gleefully exploring the macabre extreme outcomes of hypothetical scenarios involving sudden aging. Say whatever you want about Shyamalan's worst works, but he's still got the goods in terms of executing scenarios full of eerie uncertainty. He gets plenty of chances to utilize that skill thanks to several scenes hinging on how these characters have a tragic sense of ignorance over everything that's happening around them. A sudden pregnancy and especially a cave-set encounter with a woman with a Calcium deficiency had me glued to the screen thanks to how well Old conveys its characters being so in over their head.

Such scenes also get a lot of mileage out of Shyamalan's creative gusto and how effectively the filmmaker captures these critical sequences. Speaking of which, the directorial skills of Shyamalan are actually sharper than ever here. Armed with 35mm film (yay for him returning to shooting on film!) and only one location to use for the majority of the story, there's always such careful consideration in terms of camera placement. This visual precision does a great job of both subtly getting us into the mindset of these characters and reaffirming that Shyamalan is just as strong of a visualist as ever.

The third act of Old epitomizes the film's strengths and weaknesses. Here, Shyamalan is able to jump from what's basically a monster encounter to surprisingly effective pathos in an intimate scene between the members of the main family. It's a tonal jump that works surprisingly well without undercut either element. This is all followed up by a series of epilogues that refuse to end Old on an ambiguous note and instead spell out everything in the story to a comical degree. Shyamalan's writing just can't resist hand-holding the viewer, a fatal shortcoming. However, the weakest parts of Shyamalan's filmography are also accompanied in Old by some very creative set pieces that demonstrate his gifts for suspenseful filmmaking. It's a mixed bag of a movie for sure, but Old always kept my attention and intrigued me. For that, I tip my hat to this production. Plus, any movie that features a character named Mid-Sized Sedan has got to be worth something.