An attempt to rejigger the G.I. Joe series comes up disappointingly short with Snake Eyes 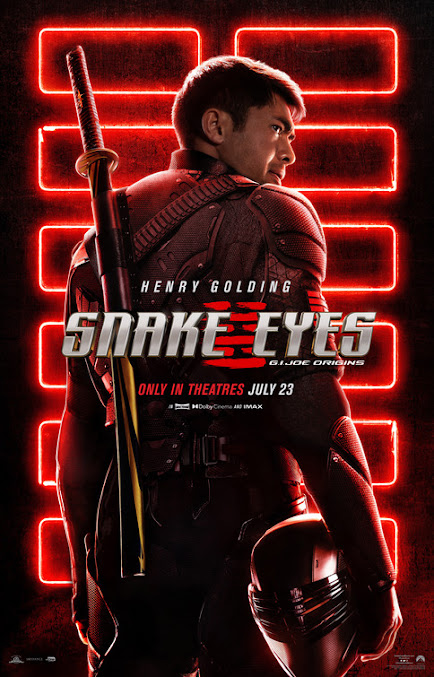 Almost a decade after the last G.I. Joe movie, Snake Eyes: G.I. Joe Origins is here to try and reboot the franchise in a new direction. The result is a feature that'll inspire you to go "that was ok" for its first two-thirds before inspiring chuckles at its incompetence in its third act. Throughout the entire runtime, though, Snake Eyes is at least consistent in making one wonder why a movie based on Hasbro action figures is so dour and lifeless. Where's the fun? Where's the excitement? All of those qualities have been largely cast aside in favor of a movie that hails to all the usual hallmarks of one of these superfluous origin stories. It's the backstory nobody wanted or cared about unless you're a Paramount Pictures executive.

Snakes Eyes follows its titular lead character (played by Henry Golding) as a kid watching his father getting murdered before we skip forward to him working as a fighter in cage matches. Then, it's a hop-and-a-skip to him being hired by Kenta (Takehiro Hira) to work him in his criminal enterprise. This is the first real narrative hiccup in the screenplay by Evan Spiliotopoulos and Joe Shrapnel & Anna Waterhouse, which takes way too long to get going. One prologue is fine but there's way too much backstory to get through before we get to the most important part of the story, the friendship between Snake Eyes and Tommy (Andrew Koji).

After Snake Eyes saves his life, Tommy takes this orphaned vengeful fight back home to Clan Arashikage in Japan. To gain a permanent home in Clan Arashikage, Snake Eyes must complete a trio of challenges to prove his worthiness as a warrior. This training will include Snake Eyes having to do tasks under the direction of an instructor played by an underutilized Iko Uwais and navigating the dubiousness of Akiko (Haruka Abe). Oh, and COBRA forces, led by The Baroness (Úrsula Corberó) are also around on the margins and wants some valuable crystal guarded by Clan Arashikage,

The greatest strength of Snake Eyes is its cast, which proves quite effective in injecting humanity to a movie that often lacks that ingredient. Henry Golding's protagonist is too brooding for his own good but Golding's charisma couldn't be muzzled if he tried. Meanwhile, I dug the hell out of Takehiro Hira and the way he portrays Kenta with this constant grin on his face as if he's always relishing the chance to cause mayhem. The real standout is Andrew Koji, though, who is incredibly compelling and lends real gravitas to the character's commitment to both his clan and Snake Eyes. Put this guy in more movies immediately, he's totally got movie star potential.

Initially, Snake Eyes is content to just go through the motions of a traditional training story, which isn't all that creative but it's passable. At least the actors are solid and the movie largely makes use of practically realized sets that make the nooks and crannies controlled by Clan Arashikage feel convincing as actual environments. Even here, though, director Robert Schwentke lets down the better parts of the movie. The action sequences get treated the worst by this flaw, they're all filmed and edited without much clarity. There's also a stunning lack of utilizing all the tools at the movie's disposal. Chiefly, how come Iko Uwais doesn't get a big fight scene all to himself?

Schwentke's problems as a visualist sink Snake Eyes' chances of working as an action movie, the one area where this film should've delivered above all others. This shortcomings also trips up even the most basic visual gags. A joke involving Uwais' character and Blind Master (Peter Mensah) and whether or not they're "staring" at Snake Eyes gets totally bungled by Schwentke's inability to properly convey space between two beings in the same environment.

Things take a turn for the worse by the time the third act arrives and it's time for Snake Eyes to choose between vengeance and helping others. It's here that I realized, during a rendezvous between Snake Eyes and Kenta, how much of this movie takes place at largely empty docks or interiors devoid of much decoration. Often, Snake Eyes just feels cheap and Schwentke does not have enough visual flair as a filmmaker to make lemonade out of budgetary lemons. Schwentke's direction really gets amateurish once the scale of the action heats up in the finale, at which points he makes more extensive use of distractingly obvious ADR work than he does actually compelling action beats.

Admittedly, even this section of the film has its fun moments, like the lead of Clan Arashikage (Eri Ishida) getting to beat up some henchman and a final showdown between Snake Eyes and Kenta is at least thematically competent. More often than not, though, Snake Eyes resorts to just smashing together random elements for its climactic fireworks show, with none of it being either fun or dramatically engaging enough to compensate for the messiness. An eye-roll-worthy ending caps the proceedings off with a promise that next time the producers of Snake Eyes will deliver the movie you'd actually want to watch. If there is a next time (and the box office results for Snake Eyes make that a near impossibility), le'ts hope they remember the fun next time and to actually let Iko Uwais fight htings.