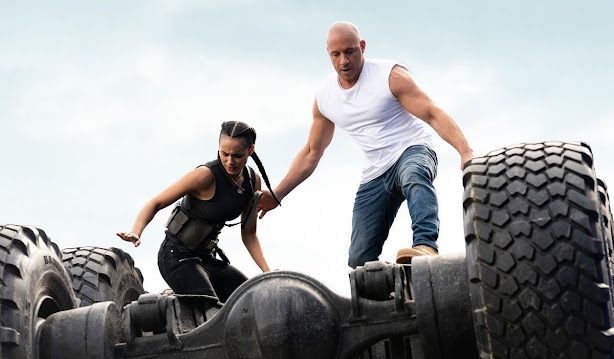 After months of uncertainty for the domestic theatrical exhibition market, F9 delivered the kind of opening weekend many thought wouldn't be possible after the coronavirus (COVID-19) pandemic.  Opening to $70 million domestically, it was a debut that seemed like a blast from the past, if the past was 2019. The biggest domestic box office debut in 18 months, it was a solid sign, coming hot off the similarly noteworthy domestic debut of A Quiet Place: Part II, that domestic movie theaters can still thrive even after a long health crisis keeping them closed.

But we're not out of the woods yet when it comes to bringing theatrical moviegoing to anything resembling a new level of normalcy. The debut of F9 is full of good news but also full of interesting developments that aren't inherently good or bad, they're just reflections of the volatile state theatrical moviegoing is in currently. These aren't restricted to just the domestic marketplace either, F9 is a film released all across the globe and its box office performance also functions as a reflection of how international box office territories are also faring in revving up theatrical moviegoing again.

So far, the two biggest opening weekends of 2021, and the two that feel like they belong to the box office landscape before a pandemic shook everything up, are A Quiet Place: Part II and F9. What do the two titles have in common? Opening exclusively in theaters. Forgoing a simultaneous streaming/PVOD debut doesn't automatically make your movie a hit (oh hi The Hitman's Wife Bodyguard) but it clearly doesn't hurt. Keeping things confined to the big screen emphasizes your movie as an event and shows a commitment to the artform of theatrical exhibition.

What'll be interesting to see now is the performance of Black Widow, which is apparently tracking for an $80+ million opening, even bigger than the debut of F9. That would be in spite of the film getting a simultaneous PVOD debut on Disney+. Still, Marvel Cinematic Universe movies are a rare breed, audiences have been conditioned to head out to movie theaters to watch these films for over a decade now. It'll be different for Jungle Cruise, which will likely get its domestic box office heavily impacted by a simultaneous PVOD launch if Cruella coming in way behind other live-action Disney remakes is any indicaiton.

While the domestic box office is showing signs of returning to pre-COVID-19 levels, several international territories have a long way to go. Case in point, the United Kingdom. Whereas F9 only dipped 29% from the opening of The Fate of the Furious domestically, in the case of the United Kingdom, the film opened to $8.4 million, a 52% decline from the opening of Fate. What's intriguing, though, is that this F9 opening still provided a boost for the territory. According to Deadline, F9 set three single-day records for a movie released during the pandemic in the U.K. Similarly, openings in Mexico and Brazil were also down from Fast of the Furious but set records for titles released during the pandemic.

This indicates a hard truth movie studios will just have to swallow; things are gonna be smaller for a little while. Not minuscule (wouldn't you like to wake up with $8.4 million in your bank account?) but down from pre-pandemic times. What's important is putting stuff out there in movie theaters that get people into seats and recovering from there. Oh, and most important of all is keeping people safe, that goes without saying, so if people are staying home out of fear of catching COVID-19, well, I say that's a net positive. Clearly, the theatrical exhibition isn't going anywhere after nearly a year-and-a-half of uncertainty. It can hold on a little longer as the international box office continues to recover.

Right from the start of the pandemic, Universal announced that F9 would be delayed a whole year to the summer of 2021. It was an anomaly among the major American movie studios, who largely delayed titles like Mulan or Wonder Woman 1984 to just three or four months after their initial release date. However, Universal understood better than anyone just how long-lasting the consequences of this pandemic would be. Whereas other movies had to keep bumping their release dates time and time again to accommodate just how all-consuming the pandemic was, F9 was able to stay cozily in the summer 2021 spot, without wasting a lot of marketing dollars in the process.
In the process, F9 has proven the value of patience. Studios that are quick to dump titles to streamers or plop them in too early of a release date are only doing a disservice to themselves and moviegoers. Universal showed that the way forward in the pandemic isn't to panic but to exhibit restraint. Whereas Warner Bros. took drastic moves like that simultaneous HBO Max release plan that alienated filmmakers, Universal had faith in the big screen and their titles and just let things simmer. They may have had to wait for a big box office hit, but the majorly impressive opening weekend of F9 indicates that the wait was worth it.

Moviegoing has returned to being countrywide

During the pandemic, movies that did get a theatrical release, like The War with Grandpa, generally made most of their business in Southern states, namely Texas. In the last three months, with California and New York City reopening their multiplexes, those locations have proven fruitful but they haven't been rampantly popular for all titles. This is a contrast to pre-COVID-19 times, when business for movies that topped the domestic box office tended to have appeal all across the individual parts of North America.

That status quo got reignited with F9, which had its most lucrative theaters from all across the domestic marketplace. Southern states like Texas still contributed a large sum to the movies gross (Texas was one of the five highest-grossing states for F9) but the wealth was spread across a multitude of indoor theaters across the nation rather than just concentrated in a handful of areas. This is how you get $70+ million openers again in the domestic theatrical space.

Tentpole blockbusters are back (for now)

In the summer of 2020, Entertainment Weekly published a piece proclaiming that the blockbuster as audiences previously knew it was dead. This was due to the difficulties of filming large-scale movies under the conditions of COVID-19 as well as the uncertainty of those costly endeavors managing to make their budgets back through a potentially slimmed-down theatrical exhibition sphere. The long-term prospects of these films is uncertainty, but F9 makes a pretty good argument that blockbusters aren't going anywhere.

Thanks to these kind of films being attached to franchises being have an attachment to as well as positive memories of watching in a movie theater, it shoudln't be a surprise blockbusters like F9 are thriving domestically. It also bodes well for titles like Black Widow and The Suicide Squad opening in the next month or so, which are also attache to long-running franchises. While the blockbuster seems to be on better than ever legs domestically, it should be noted that these are not the only kind of movies that have or should be playing in movie theaters.

The recent strong box office of foreign-language titles like Dad I'm Sorry and even this weekend's strong opening weekend of I Carry You With Me show that audiences will also turn out for smaller-scale works if they look appealing. Right now, though, the spotlight is on big-budget project F9 and it's opening weekend reinforcing the faincnial viability of blockbuster projects.