Stillwater has ambition to spare but doesn't quite realize its potential 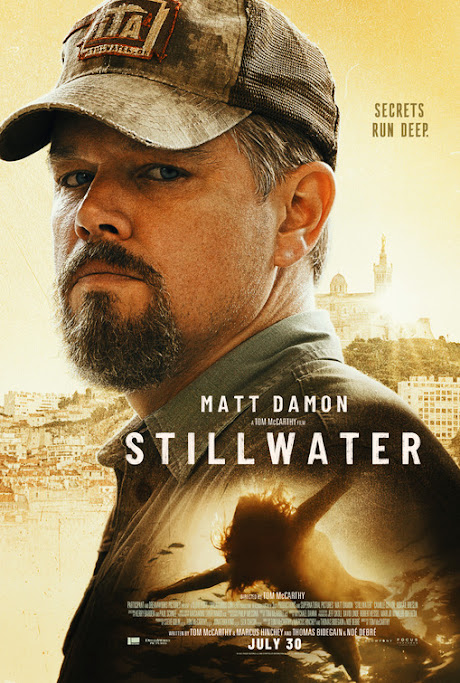 It's always nice to see ambition in a movie but it's also nice to see that ambition executed well. Tom McCarthy's Stillwater is a good example of what happens when a movie has admirable goals to reach but still exceeds its grasp. It's proficient enough on a technical level but its storytelling structure tries to do too much in one movie. Worse is that the ambition is in service of emulating other superior films, so Stillwater can never quite ascend to the level of being a messy but endearingly bravura work of art. This is a movie where the artists are clearly willing, but the screenwriting is weak.

The title of Stillwater refers to the Oklahoma city Bill Baker (Matt Damon) calls home. He'll have to leave that domicile to travel to Marseilles, where his daughter, Allison (Abigail Breslin), has been imprisoned for five years for the murder of her girlfriend. Allison continues to maintain that she's innocent, which leads to Bill going on his own quest to pursue the actual murderer. Because he doesn't speak French, Bill requires the help of Virginie (Camille Cottin), a single mother and an actress. In the name of helping his daughter, Bill begins to cause trouble that threatens to only exacerbate Allison's plight rather than save it.

Stillwater is basically a trio of films shoved into one. For its first act, Stillwater operates as basically what would happen if Taken existed in real life. Instead of being a bad-ass and blowing up buildings, Bill Baker just keeps digging his hole deeper. He's even willing to work with a racist shop owner to find another culprit to take the fall for the crimes his daughter's been accused of. Once Virginie accuses of him sounding "very American right now" after this development, it's not meant as a compliment. Writer/director Tom McCarthy (who penned the screenplay alongside Steve Golin, Jonathan King, and Liza Chasin) clearly want the audience to recognize Bill as a reflection of Americans seeing foreign countries and people as just objects to be shuffled around for their own needs.

The second act delves into a mold that's much more like a traditional McCarthy movie, a low-key exploration of drastically different people just getting along and living life. These sequences entail Bill dropping his vigilante routine in favor of connecting with Virginie and her daughter Maya (Lilou Siauvaud). There are some touching laidback moments here, but this is where Stillwater starts to fall apart. Characters like Bill meant to represent toxic ideals are not the kind of people you just wanna hang out and spend casual time with. Bill Baker works fine as an indictment as a subversion of Taken-esque protaganists, but not as the centerpiece of storytelling fixated on tranquil domestic life.

Past McCarthy movies like The Visitor or Win Win kept one's interest during the most low-key moments because the characters were engaging. There's just no one here in Stillwater that's interesting enough to make the hangout vibe of its middle section work. It also doesn't help that this is the part of the feature where some really heavy-handed dialogue gets dropped that makes it readily apparent where this story is going. Your crime drama lacks a lot of suspense when you can see the ending coming a mile away.

Dialogue is actually a big problem for this script, which constantly resorts to beating viewers over the head with what individual figures are contemplating or feeling. The story fares a bit better in imbuing specific details into the everyday life of Bill Baker, including the subtle note that he's always resorting to eating American fast food in Marseilles. Subway and Quick Trip are his comforting reminders of home in a land unfamiliar. Matt Damon nicely handles those flashes of distinctiveness even if his performance as a whole is too rigid and subdued to be extremely memorable as a whole.

I was especially yearning for more textures from Damon's performance in the third act, which sees Stillwater shifting gears yet again into a Prisoners knock-off. There's just not much difference between Damon's performance in these sequences and how he enters the movie. You could wring some fascinating and terrifying implications through that lack of evolution but Stillwater never quite goes that dark or insightful. It's got some interesting details and thoughts to offer on the topic of how Americans treat foreign countries, but its surface-level execution (especially in the dialogue) means it regularly trips over itself. Maybe if it trimmed down the runtime and tried to focus on one tone, Stillwater could've better realized its ambitious nature.