Pig goes ham on being a meditation on coping with grief 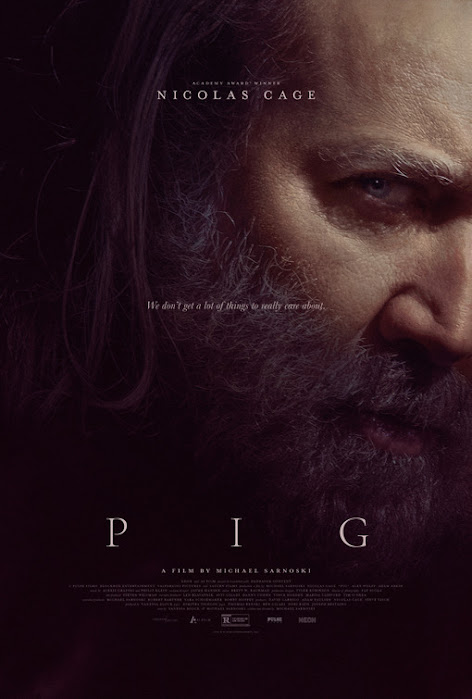 Grief doesn't hit you all at once. It's like a ripple constantly reverberating outwards. This is especially true when it comes to grief revolving around the loss of loved ones. When I lost my grandmother at the end of 2016, my sadness over her passing came on in waves that continue to this day. Same for losing my Uncle Doug or my Uncle Tommy. Processing the loss of human beings that have always been in your life, that's something you always struggle with. It's hard to convey the weight of that struggle, but boy does Pig capture those emotions beautifully. The path of coping with missing people near and dear to your heart takes you down many unexpected paths, including a hunt for a truffle pig.

Robin "Rob" Feld (Nicolas Cage) lives alone in the wilderness of Oregon. Well, not technically alone, he has a truffle pig to keep him company. A former chef still reeling from the death of his wife, he lives out his days with this critter scouting out truffles and then selling them to Amir (Alex Wolff). One random night, Rob gets attacked and his pig gets kidnapped. Having lost the one being he still loved, Rob plans to get this pig back. Recruiting the help of Amir, Rob is now returning to the world of Portland, Oregon a ghost of his former self. He may not be the man he once was but Rob is determined to get his pig back. No matter what.

The soft-spoken nature of Pig is one of its best assets. Writer/director Michael Sarnoski (making an incredible leap into feature-length filmmaking) doesn't crowd the screen with chaos and noise, allowing for the tiniest details of this film to leave an impact. Making time for a subdued scene where Rob returns to his home, for example, is such a wise move. Another writer might have tossed this sequence out for being "superfluous". But Sarnoski recognizes the value in having the viewer watch Rob walk through shadows of his past. He doesn't handhold the audience with intrusive flashbacks, but rather conveys the importance of the past through Rob's face and the melancholy atmosphere of the frame.

It's impressive how much bittersweet emotion gets wrung out of such restrained means and that feat is reflected throughout the rest of the movie. The beautifully slow-paced quality of this production works allows it to function so well as a meditation on how anguish over the past can creep into every part of our daily lives. Nowhere is this concept better embodied in Pig than in the lead performance from Nicolas Cage.

An actor too often relegated to a punchline, Cage’s work in Pig reminds us all why he’s still such a commanding actor. This guy can do maximalist acting so very well (like his bathroom breakdown in Mandy) but he's also capable of delivering remarkable turns that are much quieter, as Pig reinforces. Predominately working in a restrained mode, Cage conveys years of weariness just through his posture and his sparse dialogue makes every word he delivers something you can’t turn away from. There’s a captivating rawness here that Cage makes tangible without undercutting Pig’s understated aesthetic. It’s a remarkable feat that ensures Cage’s work in Pig stands out as one of his very best lead performances.

I also love how the script is constantly peeling back new layers of not just Rod but co-lead Amir. This guy starts as just an amusing wealthy detached chatterbox in sharp contrast to Rod’s demeanor, but he gradually picks up more and more nuance as the story goes along. Each new piece of his personality is doled out in organic doses, we don’t just get a sudden barrage of backstory on Amir. By refusing to hold the audience's hand or play things so overtly with this character, Pig crafts a fantastic representation of its empathetic spirit. Amir starts out this movie a caricature, he ends it as richly detailed as Rod himself.

Amir isn’t the only supporting figure here to garner extra dimensions. Each little side character throughout Pig carries the air having their own little world to inhabit. The supporting character Dennis is an especially great example of this. In the span of a single scene, Dennis (who waltzes into the movie carrying big Andy Daly energy) gets to go from being a chef with an artificial smile to a tragic figure emblematic of how the demands of capitalism stamp out individuality. The cutting dialogue from Rod is so well-written (“these people don’t even see you”) and it’s transfixing to watch the actual desires of Dennis peeking through the cheerful unquestioning persona he’s concocted. This sequence also embodies how Pig proves so effective because it’s essentially a movie about how important it is to see other people as, well, people.

Channeling the works of Jim Jarmusch, intimate conversations are the key to Rod making progress in his journey. This guy may be a hermit, but he and the movie he headlines are also cognizant of how just a bit of empathy goes a long way. Not only does this fit in with Pig’s aesthetic, but it also lends a sense of distinctiveness to this movie about rescuing a beloved pet. Such empathy appears in subdued but poignant forms, especially in an unforgettable reunion scene between Rod and a baker. This quality even extends to the original score by Alexis Grapsas and Philip Klein, which emphasizes sparse string-based instruments to convey a contemplative nature. There’s a beating heart in Pig that recognizes how we can never fully avoid the pain of losing people we love. But one way to navigate that turmoil of the past is to connect with people (or swine) in the here and now. When it comes to exploring such a concept in restrained but captivating terms, Pig truly brings home the bacon.