There are practically 96,000 reasons why In the Heights is simply glorious 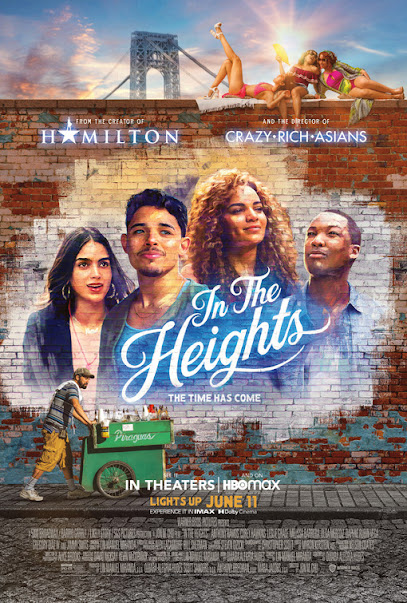 When I was but a few hours old, my Uncle Doug held me in his arms and he softly sang to me the opening song of Oklahoma! I suppose I was doomed from the start to be a fan of musicals. Beyond my own emotional attachment to the genre, though, I've often wondered, why do I, and so many other people, like musicals? Is it just the spectacle of the whole thing? Is it the earworm tunes? The dance choreography? It's all those things to one degree or another but what makes musicals extra special is their frankness. Subtle details can be found all the time in these productions but this is an art form built upon the concept of frankness.

In musicals, people wear their hearts on their sleeves. They belt out their interior desires over a cliff. There's something indescribably wonderful about watching a piece of art unafraid to say what's in its mind. Even better, the explicit nature of musicals can even put certain emotions and experiences into words that you never would have been able to explain otherwise. This quality is even more important when applied to In the Heights, an adaptation of the 2008 Broadway musical of the same name. This musical is about the residents of Washington Heights and covers people who don't normally get to have their stories told. Systemic racism and byproducts of it like gentrification keep these voices silent both on the stage and off it.

Now, not only do these denizens get to voice their opinions, they get to sing them to the heavens. Watching In the Heights use the core traits of a musical for this purpose is utterly miraculous.

Though all sorts of Washington Heights residents get the spotlight throughout In the Heights, the lead character of this piece is Usnavi de la Vega (Anthony Ramos in an instantly unforgettable turn), who runs a little corner bodega with his adolescent cousin Sonny (Gregory Diaz IV). Usnavi has dreams of rebuilding his dad's beachside bar in his home country of the Dominican Republic and also of maybe asking out Vanessa (Melissa Barrera). His crush has her own dreams of moving out of Washington Heights to pursue her sewing ambitions. Seems like everyone on this block has their big dreams. Case in point: Usnavi's best buddy Benny (Corey Hawkins), who has dreams of being wealthy, while Nina (Leslie Grace) has returned home from Stanford with dreams of never returning to that college where she feels like an outsider.

There are lots of characters to juggle in In the Heights but screenwriter Quiara Alegría Hudes juggles them all quite fluidly. There's a realistic nature to how Usnavi, Benny, Nina, and everyone else's lives occasionally cross paths, like trails of water sometimes intersecting. Doing this enhances the authenticity and also serves as subtle but effective reminders of why these plotlines are all inhabiting the same movie. Rather than coming across as overstuffed, Hudes' script instead feels like an authentic portrait of just how many complicated stories reside in one neighborhood.  On top of all that, the individual characters are all so entertaining to watch that one never minds how many perspectives are explored throughout In the Heights.

Uniting all these storylines is one key ingredient: great music. In the Heights is all about tunes first and foremost and it delivers on this emphasis. Delightfully, Hudes and director Jon M. Chu have opted to translate all those songs to the world of feature films with massive doses of magical realism. The lives of Usnavi and company are so vivid and full of excitement that they cannot be contained to gritty reality. Thus, hand-drawn animated flourishes representing everything maps of New York City subways to lightsabers are used in certain spots. Another memorable set-piece sees the passionate romance between two characters reflected through dance choreography that literally defies gravity.

The best use of heightened musical storytelling comes in the showstopper Paciencia y Fe number, in which the whole life of the character Abuela (Olga Merediz) is compressed into one three-and-a-half-minute tune. It's like the Married Life montage from Up in how it manages to cram a rich life into a short span of time. This quality is visually reflected through Abuela navigating both a subway train and a train platform that is constantly shifting through time. Watching it, I truly felt like I was watching something I had never seen before, a quality only strengthened through Merediz's emotionally devastating performance. Who needs to be rooted in discernable reality when you can create stylized storytelling this magnificent?

In the Heights is a modern movie musical that makes no bones about what it is. The songs are not generic pop ditties that somehow made their way into the mouths of on-screen characters. It doesn't constantly trip up its plot trying to explain why strange things are happening on-screen. And it most certainly has no time to apologize for being a musical. Instead, the production concentrates on giving us enjoyable characters we can root for and more eye candy than you can shake a fist at. Those visuals are executed under the deft eyes of director Chu and cinematographer Alice Brooks. Both of them do impeccable work making sure the energy of these various musical numbers is maintained through appropriately lively camerawork.

The buoyancy and fun in In the Heights echo classic musical movies, but the emphasis on the perspectives of various marginalized groups ensures that this is no retread of older features. There are people way more qualified than me (like Monica Castillo) to talk about how the film handles its depiction of the Latinx community. But something that did strike me about In the Heights is how it's one of the rare modern major Hollywood movies to focus on working-class people. So many of our present-day features solely idolize the rich while demonizing people who advocate for change.

But in In the Heights, our hero, Usnavi, is a cashier, the kind of essential worker that is helping us all get through the pandemic. An early montage showing how Usnavi has to deal with everyone at the counter from people sobbing to a guy spilling his side everywhere resonated as 110% authentic to this former Walgreen's cashier! In addition to reflecting tragically under-highlighted figures in both our workforce and in cinema, it's those kinds of specific details that beautifully populate the whole world of In the Heights. Every background character, every prop on a shelf, every piece of food on a dinner table, they're all so singularly realized that they all seem to have their own rich story. It's quite wonderful how In the Heights creates an immersive quality to a depiction of the everyday world.

Thanks to my Uncle Doug, I've loved musicals for (literally) my entire life. I've loved musicals for so long that it's impossible to pinpoint a singular concise reason why I adore them. Watching In the Heights, though, is like a 142-minute-long reminder of the joys this artform can produce. I mean, just that 96,000 tune alone is a symphony for the eyes, the ears, and the soul all at once! Why do we love musicals? Experiencing In the Heights on the big screen with a big crowd, you'll understand why in your bones.

Posted by Douglas Laman (NerdInTheBasement) at 11:12 AM