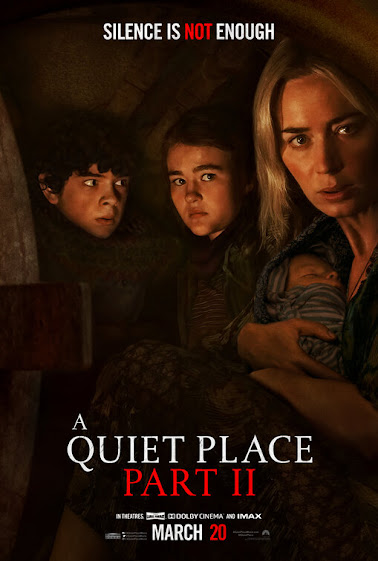 How did we get to this place where John Krasinski is directing horror movies? Usually, when a filmmaker leaps from indie films to genre fare, there are traces of their earlier works found in their bigger-budgeted forays. But Krasinski started his career with the David Foster Wallace adaptation Brief Interviews With Hideous Men before segwaying into The Hollars, an indie movie from 2007 somehow released in the year 2016. Nothing in his nascent filmmaking career suggested an interest in horror, neither did his pursuits as an actor. But he not only made a strong foray into the genre with A Quiet Place, but he's also even pulled off the welcome hat trick of executing a quality horror sequel.

After a prologue that takes viewers back to the first day of the invasion of those deadly monsters with extra-good hearing, A Quiet Place Part II picks up just seconds after the ending of the first movie. Evelyn Abbott (Emily Blunt) is on the move with her three kids, Regan (Millicent Simmonds), Marcus (Noah Jupe), and a newborn baby. While evading a monster, they run into Emmett (Cillian Murphy). Broken down after the loss of his wife and kid, Emmett discourages the quartet from seeking out any hope or refuge. However, the possibility of stopping these monsters for goods inspires a plan inside the mind of Regan, which could require the help of the withdrawn Emmett.

A Quiet Place Part II neither reinvents the wheel nor makes enough noise to be declared a masterpiece of a sequel. Plus, goodness knows the world needed another horror sequel like I need a bump on the head. But if we have to get horror sequels, I'd appreciate them being as enjoyable as A Quiet Place Part II. Simply put, the film does deliver on the scares you want and Krasinski continues to be a capable hand at executing suspenseful sequences for maximum thrills. Again, no clue where this talent suddenly blossomed from, but honestly, I'm glad it did. Nicely, this follow-up maintains that quality filmmaking from the original but throws in its own flourishes to make sure it's not just a carbon copy of the past.

For one thing, this particular entry shifts many of the scares so that they take place in the bright sun. Between this and Midsommar, I'm all for the resurgence of daytime horror! The dissonance between the vivid colors of an afternoon placed against monsters just throwing people against buildings is a properly eerie sight. Plus, the presence of all this sunlight does lull you into a false sense of security no matter how many times big beasts leap from out of nowhere. Krasinski is cleverly playing on how we're all conditioned to trust daytime, it's during nighttime that things that go bump in the night can get you. By recognizing this universal perception, A Quiet Place Part II is able to regularly and successfully jolt viewers out of their seats with its scares.

Also separating this from the last installment is the presence of Cillian Murphy as Emmett, who brings a world-weary persona to this franchise. Murphy's always been good at playing someone who's just a little out of touch with the people around him, it's why he worked so well as a guy suddenly thrust into a zombie apocalypse in 28 Days Later. Here, his haunted eyes and shortness of words echo his shell-shocked soldier from Dunkirk in terms of effectively conveying a husk of a man. Smartly, Krasinski keeps this character's backstory off-screen, a smattering of dialogue and especially Murphy's evocative performance are all that's needed to capture the hell this guy has been through.

Murphy is a prominent part of A Quiet Place Part II and it wouldn't be surprising if many audiences walk away thinking he's the standout element of the feature. However, if this story belongs to anyone, it's the kid characters. A Quiet Place Part II opts to begin framing this entire saga around the idea that hope in a post-apocalyptic wasteland can be found in the adults of tomorrow. It's a good thing this central theme has a lead actress as good as Millicent Simmonds to hang this idea on, as Simmons conveys a sense of conviction that makes you think the future could be in capable hands. Supporting performer Noah Jupe continues his recent streak of memorable turns with his on-screen work here, particularly in depicting his character's most harrowing moments of despair.

A Quiet Place Part II, like 99% of follow-ups out there, isn't quite a perfect sequel. Most notably, Krasinki's script stumbles in certain spots by just having characters act in an abrupt manner to move the plot forward while a belatedly introduced supporting actor gets too little screentime. Largely, though, this is a sequel that succeeds in what it aims to do. Some sequels would have just mechanically handed viewers what they've seen before but Krasinski balances welcome familiar details (like the small-scale and lack of dialogue in the original) with newer ingredients that keep this from being a retread. Still don't have a clue how Krasinski got to this point as a filmmaker, but with a movie as entertaining as A Quiet Place Part II, I won't question it!