In Laman's Terms: The curious case of watching The Fast and the Furious in 2021 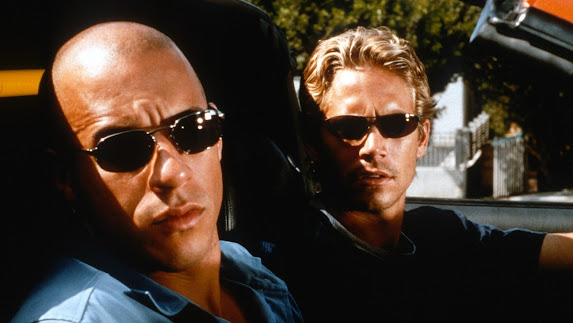 Now that I'm writing Features columns for Collider, my In Laman's Terms pieces have slowed down to a crawl over the last three months. Writing those essays on this website for four years helped to prepare me for my exciting Collider gig and I'm so grateful for that. That doesn't mean In Laman's Terms is dead, though. It's been revived to talk about, on the heels of F9 zooming into movie theaters, about that movie that started that whole automobile-centric franchise, The Fast and the Furious.

Turning 20 years old this month, The Fast and the Furious is a curious relic of the early 2000s in many respects, and not just because much of the plot revolves around stolen Panasonic DVD players. The whole thing is a clear riff on the 1990s action movie Point Break while the editing, music cues, and even title card practically scream out that this is something from the dawn of the 21st-century. Oh, and then there's the fact that one of the first lines of dialogue in the film involves supporting character Vince calling Brian O'Connor (Paul Walker) a "faggot." Whereas Point Break embraced homoerotic tension, The Fast and the Furious immediately sprinkles in some homophobia in the car race action movie.

That's not the only area where this 2001 feature deviates from the Kathryn Bigelow movie it's so clearly imitating. The key difference between the two films is that Point Break is a lot of fun to watch whereas The Fast and the Furious takes until its last half-hour to really generate a pulse. Once Dominic Toretto (Vin Diesel) and company try to pull off "one last job" against a trucker who's wielding a shotgun, The Fast and the Furious teases the kind of high-octane action that would define subsequent sequels. It's a fun set piece that gets a lot of mileage out of the tension surrounding whether or not Toretto and O'Connor and pals can save Vince, whose trapped on the side of a truck.

These characters work just fine as chess pieces to be moved around during car-centered action scenes. When they're not doing that in The Fast and the Furious, though, they're just not that engaging. Director Justin Lin would inject a sincere sense of affection between Toretto and his ramshackle "family". Meanwhile, the constant rivalry between Toretto and O'Connor is a bunch of insufferable macho posturing. From the seeds this movie plants, a more loving relationship would form, but until it does, there's just not much between this duo. Toretto's companions in the world of street racing are pretty forgettable save for one guy apparently having ADD.

Most amusingly, the women in The Fast and the Furious are quintessential examples of toxic ways for men to write women. Every woman in this universe hates every lady that crosses her path, with one of Letty's (Michelle Rodriguez) earliest lines centering around dubbing two women fawning over Toretto as "skanks." Even later entries in this franchise have serious problems with how they handle women, specifically in how often Fast & Furious movies resort to slaughtering women to generate tension. But something like Furious 7 practically looks like Born in Flames when compared with the treatment of lady characters in The Fast and the Furious.

Interestingly, the dire writing of these kinds of characters stems directly from the lack of imagination that weighs down the whole project. The Fast and the Furious is still stuck in a lane too anchored to Earth and the molds of other blockbusters to establish its own personality. Interestingly, the only time it comes to life before its finale is a scene where Toretto offers up a big monologue about how his father died. It's the one instance of emotional vulnerability in the whole film and at least tries to approach these characters as something other vehicles for generic edgy quips. Future Fast & Furious movies would refine the humanity and cynicism-free poignancy that, 20 years ago, The Fast and the Furious only briefly flirted with.

Posted by Douglas Laman (NerdInTheBasement) at 11:37 AM