The Conjuring: The Devil Made Me Do It see's a once creative horror series settling for averageness 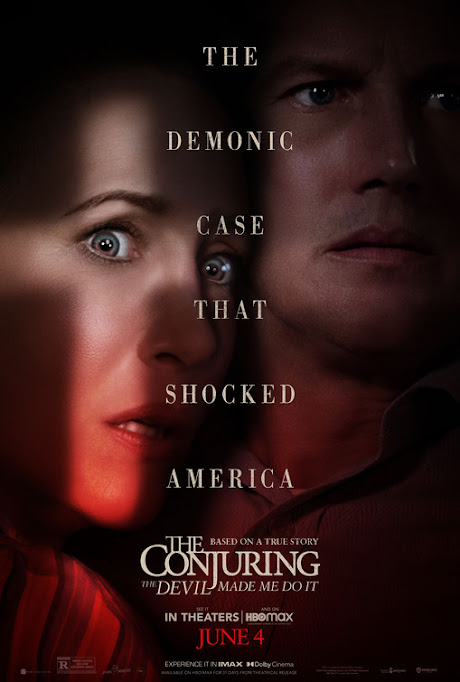 A lot of long-running horror franchises start out with an initial installment that was a departure from the then-norms of the horror genre. These films are able to sustain so many sequels because that inaugural feature resonated so deeply with audiences as something truly different. Saw, for instance, was a wild deviation from all the reheated horror remakes dominating theaters while Paranormal Activity was itself a departure from the torture genre Saw spawned. The next link in this chain was the 2013 film The Conjuring. This title was a breath of fresh air from microbudget found-footage movies told through shaky-cam. This was thanks to the presence of well-known actors like Vera Farmiga and very thoughtful camerawork that emphasized how something spooky could be lingering in the background of a wide shot.

What was fresh in 2013, though, has become far more familiar, and as a result less eerie, in 2021. Like so many long-running horror franchises that started out breaking the mold, The Conjuring: The Devil Made Me Do It sees a horror going from bone-chilling to being the kind of predictable fare other horror movies subvert.

This installment in The Conjuring series takes the actions to the 1980s, with Ed (Patrick Wilson) and Lorraine Warren (Vera Farmiga) overseeing the exorcism of a young boy. The event seems to rid the child of the demonic entity, but in reality, it's been passed onto Arne Johnson (Ruairi O'Connor). A kindly young man, Johnson ends up murdering his landlord under the possession of a demonic entity. The Warrens urge the use of "demonic possession" as the primary defense for Johnson, but, of course, nobody believes them. They're gonna need proof. This leads the Warrens to head out on a search for clues, which leads to the discovery of a demonic totem placed under the house that the initial young boy lives in. This item kicks off a mystery to figure out who is responsible for siccing a demon on Johnson before Johnson is sentenced to death.

The prospect of doing a courtroom drama but one that involves demonic possession is, admittedly, an enticing affair for trashy horror entertainment, even if using a real-life case that involves an actual deceased person feels like the wrong kind of exploitative. Screenwriter David Leslie Johnson-McGoldrick isn't content to keeps things confined to an imprisoned Johnson, though. The Conjuring: The Devil Made Me Do It has way too big of a scope for its own good. In cutting between all the clue-hunting (which frequently entails separate storylines for Ed and Lorraine) and also occasionally cutting back to an incarcerated Johnson, Johnson-McGoldrick fails to keep the tension up. In trying to tackle several different plot threads, few of them leave an impact.

The biggest victim of this storytelling flaw is the characters. Johnson just isn't set up as an interesting character beforehand. He's a broad caricature of home-spun country boy niceness that I'm surprised he didn't have a straw hat and a piece of wheat sticking out of his mouth. Despite Ruairi O'Connor doing his best to inject tangible humanity into the part, I just never got invested in his plight. The generic mystery surrounding the demonic totem takes away time that could be spent exploring Johnson's mindset while being behind bars and dealing with a demon. Without getting a feel for the interior world of Johnson, the major ticking clock of The Devil Made Me Do It lacks urgency.

Worse than that, though, is that the big scary set pieces of this particular Conjuring installment lack imagination. One of these sequences takes place in a morgue and director Michael Chaves doesn't do anything particularly interesting visually to differentiate this scene from the countless other scary scenes that have used this same locale. A similarly generic underground tunnel is the forgettable backdrop for the climax. Even worse, Chaves is far too much of a fan of just ramping up lots of noise and wind to indicate when audiences should be scared. The creeping sense of dread that marked the better scary scenes in the first two Conjuring movies is gone, here replaced by just beating the audience over the head when we're supposed to be gripping our armrests.

If there is a bright spot here, it's that Wilson and Farmiga continue to be enjoyable in the lead roles of the Warrens. The flashes of realistic lived-in chemistry in their rapport are nice and each actor has an agreeable aura to them. The costumes and sets are competently realized, even if the 1980s costumes didn't seem as differentiated as expected from the 1970s attire of the first two Conjuring movies. Best of all, The Devil Made Me Do It doesn't even run 105 minutes before the credits roll. Still too long, but thank God it's not over two hours. The Conjuring: The Devil Made Me Do It isn't an outright bad horror sequel. Compared to so many bad horror sequels, it's painless enough. But it's also a woefully generic film without much of a pulse or any real scares to offer. What a far cry from the original film, which really felt like a bolt of the blue.

Posted by Douglas Laman (NerdInTheBasement) at 11:18 AM