The only fleetingly engaging False Positive largely lacks a pulse 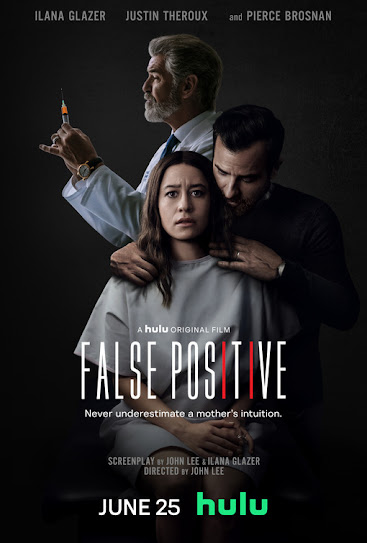 Lucia "Lucy" Martin (Illana Glazer) wants to have a baby. She and her husband, Adrian Martin (Justin Theroux), have tried everything but nothing seems to click. A visit to Martin's good friend Dr. John Hindle (Pierce Brosnan), though, provides the miracle Lucy's been looking for. Using his own patented medical procedure, Hindle gets Lucy pregnant. Excitement turns to dread, however, as strange occurrences begin to make Lucy suspect something is up. Could it just be a little bit of mental anxiety brought on by the impending newborn? Or is there a greater conspiracy at play that's looking to strip away her autonomy?

False Positive is a feature with a fine starting concept but not much else. The production is so strangely flat and devoid of personality, it's like someone took the outline of a movie and decided to use that as the shooting script. It especially comes up short as a horror movie. Director John Lee has extensive experience with comedy having been involved in everything from Pee Wee's Big Holiday to co-creating Xavier: Renegade Angel. His inexperience with horror becomes apparent with how heavily False Positive relies on tired jump scares and random patches of dimly-lit space to convey the impression that something scary is happening.

The biggest problem with the film's attempts at scares is that it tries to be a project relying on ambiguity. As Lucy naviagates a streak of horrifying dreamlike scenarios, the viewer isn't supposed to be certain what is and isn't real due to Lucy's doctors telling her she's suffering from "mommy brain." It's an interesting concept to utilize in service of a story all about how women are treated like objects by the people around them. Intirguingly, it's a route that evokes Daria Argento and how he used surrealistic imagery to reflect a specifically female perspective in his classic horror film Suspiria. Unfortunately, False Positive can't live up to its own creative influences.

Lee and Glazer's screenplay doesn't go anywhere especially unpredictable with all this ambiguity. The small cast means that it's easy to pick out who our villains are early on. Even worse, the horrifying "dreams" Lucy has are full of imgary that's more derivative than terrifyingly impenetrable. False Positive bets big on viewers deriving their entertainment from being kept on the edge of their seat. Unfortunately, without much in the way of successful ambiguity, the film as a whole suffers. There's not much else here to back up the drought of uncertainty.

Long stretches will go by without much in the way of either terror, laughs, interesting characters, or even just memorable filmmaking. False Positive isn't a terrible movie but it is a forgettable one, a shame considering it hails from the mind of Ilana Glazer. The creativity she exhibited throughout her time on Broad City fleetingly emerges here, mainly in low-key scenes where Glazer's gift for capturing authentic human behavior can really shine. Mostly, though, this is one of those horror films that just reminds you of past movies rather than creating something new and exciting.

If there is a high point of False Positive, though, it's its last ten minutes. Is it worth sitting through the whole movie to get there? I'm not sure, but when the gloves finally come off and the blood starts pouring, False Positive finally gets a pulse. It's also here that Lee engages in some totally out-there imagery that would have been right at home on Xavier: Renegade Angel. Despite being so detached from reality, all these strange occurrences and visuals do a great job of getting inside the head of Lucy. The only major downside to this finale is that it'll leave you wondering why the rest of False Positive couldn't have this same mixture of gonzo energy and characterization.

Posted by Douglas Laman (NerdInTheBasement) at 11:52 AM