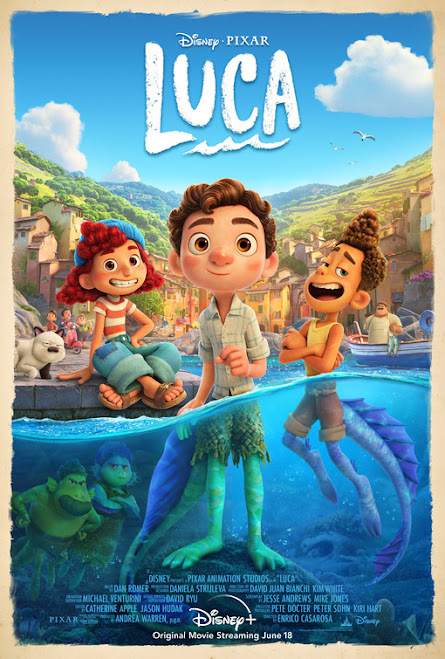 Luca Paguro (Jacob Tremblay), the lead of PIXAR's newest animated movie Luca, is a sea monster living with his very sheltered family. All he wants is to go above the surface, where he'll transform into a human boy. He just wants to be where the people are. He wants to see 'em dancing, walking around on those, what do you call them? Oh, right, feet! But that's a big no-no in his household, with his protective mom Daniela (Maya Rudolph) explicitly telling her son "You think you can do these things, but you can't Luca!"

Everything changes for Luca when he stumbles onto another sea monster boy named Alberto (Jack Dylan Grazer), a free-spirited kid who lives above the surface with no fear. The duo becomes fast friends and soon plan to take their antics and dreams of owning a Vespa scooter to the local town of Portorosso. However, the townspeople here hate sea monsters with a burning passion. There are some good folks here, like spunky local girl Giulia (Emma Berman), and also a chance to score enough money to win a Vespa by winning a big race. Complications arise, though, through the town bully Ercole Visconti (Saverio Raimondo), who will win the race at any cost, as well as Luca's parents deciding to go look for their son.

The works at PIXAR Animation Studios have always tipped their hat towards Japanese animation house Studio Ghibli. Remember the Totoro plushie in Toy Story 3? Luca is certainly trying to channel the spirit of those films and not just because its Little Mermaid-variant premise evokes Ponyo. The focus on children navigating fantastical elements intruding on "normal" society and especially the low-key story vibes make it clear what movies inspired director Enrico Casarosa. Strangely, though, he and screenwriters Jesse Andrews and Mike Jones seem to have missed what made those films special in the first place.

Namely, Luca still wants to adhere to tenants of traditional dramatic storytelling and that's just not what Studio Ghibli projects are about. Not all of them, of course, (Princess Mononoke or The Wind Rises are the obvious exceptions) but the Studio Ghibli titles Luca is most clearly evoking are hangout movies. Even the one with the pig who flies planes in World War II is mostly about character interactions rather than a mad race to save the planet. There's a tranquil quality to something like My Neighbor Totoro. Luca, meanwhile, is never confident enough to just chill out.

It stills needs a cartoonish bad guy who makes Chick Hicks look as intimidating as Anton Chigurh. It still needs a predictable "all is lost!" moment at the end of the second act. Worse, it also doesn't realize that the laidback Ghibli efforts are all about delivering gloriously stylized imagery that could only be accomplished in animation. Who needs to follow the "Save the Cat" method of storytelling when you have a Catbus? Unfortunately, Luca roots its characters in the real world for much of its runtime. It's all so much drab reality. PIXAR's done a great job of replicating what a real coast-side Italian city may look like but I can see that on a postcard. The lack of visual imagination is the apotheosis of how Luca wants to be a Studio Ghibli movie but doesn't understand what makes them tick.

To be clear, Luca isn't underwhelming because it isn't a Studio Ghibli movie. It's just that how misunderstands its creative inspiration crystalizes flaws that would be problematic under any circumstance. For example, the animation. Oh, if only PIXAR was interested in using computer animation as something other than a promotional reel for how well their Renderman software can create realistic-looking backgrounds. Aside from human character designs that look a little more Aardman-esque than usual PIXAR humans and one delightfully grotesque uncle sea monster character, there's not much to write home about in Luca's visuals. Brief fantasy sequences and hand-drawn renderings of the characters in the end credits are the high points of eye candy in the film. They also taunt the viewer with how much better Luca could have looked if it went in a bolder creative direction.

As for the story, it's all pretty lightweight. Luca is a very bog-standard affair without much in the way of either subversion or loving embodiment of classic storytelling qualities. It's just more mechanical than anything else. Some of the gags that get wrung out of Luca's parent's obliviousness towards children once they come up to the surface did get me cackling, as did the visual gags revolving around a suspicious cat named Machiavelli. Plus, there are some conceptually nice, if familiar, moments of poignancy in the third act. Still, even this comes with an asterisk, as the derivative nature of the characters means that big tearjerker moments in the finale are never as emotionally affecting as they should be.

The voice acting, meanwhile, is mostly serviceable, even if it's puzzling why there are so few Italian performers in the cast. Meanwhile, Dan Romer, in his most high-profile film composer gig yet by far, delivers one of the more generic scores in the PIXAR canon. Like so many aspects of Luca, these orchestral melodies could have been picked up and tossed into any old movie. The whole production is too familiar for its own good and lacks the conviction to dip its toes into more creatively intriguing waters. One of the more disposable PIXAR films, it's better to give Luca a pass and just watch one of the many wonderful family-friendly Studio Ghibli titles instead.