Tribeca Film Festival 2021: Ted Bundy drama No Man of God is a chatty but engaging affair 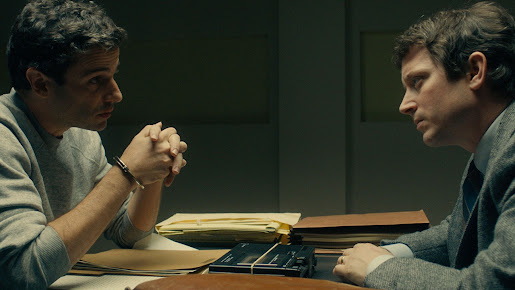 As No Man of God begins, FBI agent Bill Hagmaier (Elijah Wood) is working with a group of other agents to pick the brains of well-known serial killers. While picking out their next assignments, Hagmaier volunteers to cover the incarcerated Ted Bundy (Luke Kirby). His colleagues dismiss this as a fool's errand given that Bundy has, in the past, made it apparent he won't talk to any law enforcement personnel. However, as Hagmaier sits down with Bundy, the two do develop a rapport. Hagmaier has an unassuming nature that's able to create a bridge between himself and Bundy. As the two continue to talk over the next few years, though, Hagmaier can't help but wonder if he's the one getting info out of Bundy or if this serial killer is seizing an opportunity to exploit Hagmaier.

Directed by Amber Sealey and written by C. Robert Cargill under the pseudonym Kit Lesser, No Man of God differentiates itself from other films about Bundy through its small scale. This doesn't just manifest in how the film largely takes place in a few locations. It also extends to the presence of Bundy himself in the story.  Bundy occupies the same role here that Mr. Rogers did in A Beautiful Day in the Neighborhood in that he's a supporting player whose existence impacts a protagonist the audience can relate to it. A little bit goes a long way and taking this road with Bundy certainly helps to separate No Man of God from other movies that plaster every frame with this serial killer.

The film's approach to Bundy is also unique, mostly in how pathetic the guy comes across. Since No Man of God starts with him already incarcerated, the audience views Bundy mostly as a rat trapped in a cage. He's constantly creating excuses for who the real villains in this situation are while he also exhibits a lot of confidence...right up until the moment someone like Hagmaier calls him out on his BS. Then he collapses like a house of cards. It's a unique approach to this horrifying figure that's handled nicely by Luke Kirby. He lends a quietly creepy quality to the character even when Bundy's just walking to an interrogation room. Even better, moments where the character explodes feel natural in the hands of Kirby.

Playing opposite Kirby's Bundy is Elijah Wood. With those big blue eyes and a child-like face, Wood has always functioned well as an everyman who is dwarfed by everything happening around him. That makes him a good fit for the role of Hagmaier, a guy who is pretty much open from the start that he's a small fish in a big pond when it comes to interrogating Bundy. Wood and Kirby have good unpredictable chemistry together in their scenes together. This is especially true in the third act when they each portray the drastically different ways their individual characters perceive their rapport. Sealy and Lesser opting to keep the focus of the film primarily on conversations between these two turns out to be a wise move given how engaging these performances are.

Even with a restricted scope at her disposal, Sealy deals out some memorable visual flourishes, including quick jumbled montages of home video footage that lend insight into the mindset of Hagmaier. I also liked how she framed the women characters that come in and out of the movie. They're never filtered through a gaze meant to reflect points-of-view of the two male leads. Instead, they're captured in shots that emphasize the fact that these women have their own interior worlds. One particular shot of entailing the camera slowly moving in on an assistant to a preacher while Ted Bundy speaks is an especially good example of this. While a man who snuffed out so many women rambles on, Sealy's camera focuses on a lady keeping herself together as the interview drones on.

Visual elements when No Man of God isn't confined to Bundy's prison are much more pedestrian. For instance, simple scenes of dialogue between Hagmaier and his colleagues are distractingly captured through constant cuts that disrupt the flow of their conversations. Meanwhile, the low-budget nature of the production is especially apparent whenever the story cuts back to Hagmaier's FBI office. There's also a bad case of clumsy expository dialogue in early scenes in the screenplay, particularly by Robert Patrick as Hagmaier's superior. Even with these shortcomings though, No Man of God works more often than not as a distinctive production, an especially impressive feat given just how many Ted Bundy movies are out there.