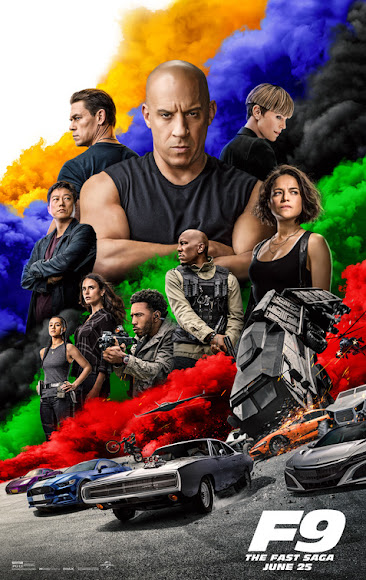 NOTE: SPOILERS AHEAD FOR F9

It's fitting that F9 is the ninth film in the Fast & Furious saga since it feels like nine movies crammed into one. You certainly get a lot of bang for your buck but F9 way overestimates the value of backstory. We're all here to see stunts and a surprising amount of sincerity, not lore.

The basic plot for this entry kicks off with the re-emergence of Jakob (John Cena), the long-lost brother of Dominic Toretto (Vin Diesel). The duo had a falling out years ago in the wake of their father's demise, but now, they've been reunited as enemies. Jakob is after Project Ares, a device that can control all technology devices on the planet. Wanting to prevent nuclear armageddon, Toretto and his makeshift family spread out across the globe to stop him. Along the way, the good guys rediscover that Han (Sung Kang) is actually still alive while previous baddie Cipher (Charlize Theron) is incarcerated in a glass box, observing the brother-on-brother rivalry with intrigue.

Across this plotline, there are recurring flashbacks showing Dominic and Jakob as teenagers, including an opening scene where we watch their father perish in a racetrack accident (an event first referenced all the way back in The Fast and the Furious). The presence of these sequences indicates that F9 is more like a Saw sequel than a Fast & Furious installment. Like many later entries in that torture horror series, F9 is fixated on jumping around time to fill in gaps of mythology that nobody was really curious about. There just isn't much gained from going back to the past so much and it's an especially strange decision since it doesn't inject Jakob with much of a personality.

That's the biggest shortcoming of the picture, the sibling rivalry that serves as the lynchpin of F9 just doesn't work like it should. There isn't much of a concrete personality in Jakob, there isn't even a basic schism in the occupations he and Dominic occupy. They're just both muscular dudes who speak with few words and are holding grudges about the past. The role doesn't even play to Cena's strengths as an actor, which do exist in projects like Trainwreck and especially Blockers. Worse, Jakob is accompanied by a series of yawn-worthy foes, like the pampered son of the lead of a European country and Cipher. The latter character has appeared in two movies and I still couldn't tell you who her personality beyond the fact that she always has the worst hairstyles.

Without much in the way of fun villains or a decent Toretto vs. Toretto dynamic to hinge the movie on, F9 proves to be an only erratically engaging affair. When it does click, though, it's because director Justin Lin really is gifted with delivering automobile-populated scenes of enormous spectacle. He constantly delivers the kind of mayhem you'd see if an eight-year-old had access to a gigantic bucket of Hot Wheels cars. None of it can reach the best set pieces in this franchise, like that opening train heist from Fast Five, but more often than not, the vehicular mayhem in F9 does leave you reasonably satisfied in the moment.

Meanwhile, the cast is...well, strange this go-around. F9 keeps throwing out new celebrity guest stars as if we're on an episode of the 1966 Batman TV show. Most of these people, like Cardi B or Helen Mirren, actually tease exciting adventures that the movie never follows up on. They're here and then they're gone after a scene, never to be seen again. F9 keeps teasing a lot of fun toys to play with but it keeps leaving them in the toy chest. It's a weird byproduct of Lin and Daniel Casey's screenplay, which is so stuffed with ideas but never fleshes out any of them to a satisfying degree. Cardi B deserved better and so did many of the other undernourished plotlines here. Put these elements front and center instead of all the flashbacks!

On the plus side of things in terms of performances, the main trio from Tokyo Drift returns here in a small capacity and prove to be delightful. Meanwhile, Sung Kang and Nathalie Emmanuel prove to be the standouts among the main cast members, with Emmanuel getting to show some humorous vulnerability in a set piece centered around her character's inability to drive. The rest of the main performers inhabit their respective archetypes with competent but not exactly memorable results. I did like, though, Tyrese Gibson's portrayal of comic relief character Roman Pearce flirting with becoming meta about being someone who occupies a movie. When he talks about how he never gets fatally injured during these world-saving escapades, I half-expected the Electric Mayhem to show up and hand him a copy of the F9 screenplay!

There's a scene at the end of F9 that crystalizes the sincere hopeful spirit that separates this wackadoodle franchise from other blockbusters. Tej (Chris "Ludacris" Bridges) and Pearce have entered outer space in their rocketship car and as they gaze out at the cosmos, Pearce notes that it's incredible that "two guys from the ghetto" got her, to the stars. There isn't even an immediate joke to undercut the moment, there's just this sense of wonder at this moment. When F9 embraces ridiculousness punctuated with cynicism-free awe, it's a lot of fun. Unfortunately, this messier entry in the Fast & Furious family also spends too much time looking in the rearview mirror with those flashback sequences drenched in angst and anger.

There are at least nine movies jostling around inside F9. If only there was more consistency in quality across those nine features, then this overstuffed feature wouldn't be in need of a tune-up