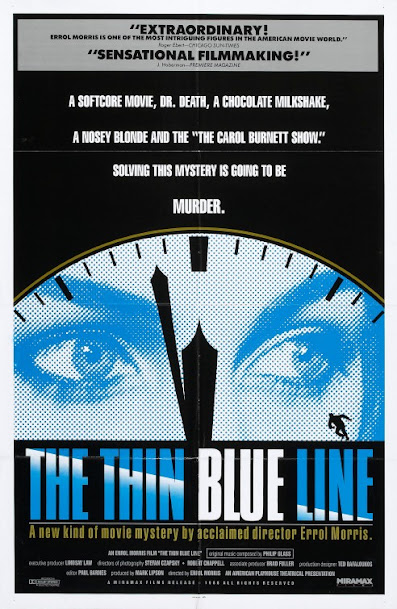 Dallas, Texas doesn't have the best reputation in cinema. Aside from True Stories, it's hard for me to remember a movie that positively reflects this city. Now, I love Texas, and I do love Dallas,  Texas, but I'm also conscious of its flaws. To put it gently, this sort of negative connotation that Dallas has taken on in cinema isn't exactly unwarranted. Especially since that reputation largely has to do with how it handles marginalized groups, such as people of color, women, and the wrongly imprisoned. It's not that movies have a "liberal agenda" to ruin Dallas, Texas, it's that cinema is often an artform used to provide a voice to the voiceless, including those persecuted in Dallas, Texas.

Case in point for all these concepts: the 1988 documentary The Thin Blue Line. This project chronicles how Randall Adams was arrested for the murder of a police officer in the 1970s. Though Adams maintained his innocence, a man by the name of David Ray Harris placed him as the murderer in question. This sealed the man's far. Adams was soon put in prison for life for a crime he insists he didn't commit. This documentary examines the factors that actually led to Adams being locked up as well as troubling circumstances that indicate this man is innocent. It's a fascinating investigative drama unfolding your very eyes.

Nowadays, many of the techniques pioneered here in The Thin Blue Line are commonplace. Filmed recreations of real events, that are practically guaranteed to show up in any crime doc. The method of having interview subjects speak while looking directly at the camera, that's also standard procedure now for all documentaries. While these tools are common now, their execution here still impresses decades later. Having folks like police officers deliver their anecdotes like this, for example, still resonates as a thoughtful way of creating a bond between the viewer and the on-screen subjects. The urgency of the subject matter they're discussing is enhanced by their intimate framing.

Also remaining as timelessly captivating as ever is how director Errol Morris draws back the curtain to reveal just how dwarfed Randall Adams was in his crusade to prove his innocence. Little by little, Morris paints a vivid picture of how many people were predisposed to believe this guy was the man behind the murder. This is especially true once Dr. James Grigson enters the picture. Famous for how many patients he diagnoses as being sociopathic enough to get the death penalty, this guys track record is what clinches Adams' fate rather than any actions on the part of Adams. This portrait of how systemic institutions end up being the motivator for imprisonment rather than the actions of an individual, Jesus, it's just heartbreaking.

Then there's the similarly gradual but dramatically compelling way Morris frames the ever-growing crime streak of David Ray Harris. Initally presented in the film through the lens of law enforcement officers who simply saw him as a "rowdy" teenager, The Thin Blue Line eventually reveals just how many acts of cruely Harris committed between killing that police officer and finally getting arrested. The undeniable tragedy of how all that brutality could have been wiped off the map if the cops had just done their job, it's unshakeable. The fantastic pacing in The Thin Blue Line's reveal of the larger canvas of crime Harris is involved in makes that final audio-recoridng of his confession all the more bone chilling.

That particular scene is one of the more unforgettable in The Thin Blue Line, as is a recounting of testimony during the fateful trial about how police provide a "thin blue line" between peace and anarchy. It's a warped view of the relationship between police and citizens that diefies law enforcement, places them on a pedestal. It's a point-of-view that's only gotten more mainstream as the years have gone by, much to the detriment of our most vulnerable communities. The top-class filmmaking in The Thin Blue Line is eternally impressive, but it's chill-inducing how the films portrayal of corrupt systemic police work is similarly timeless.