Bo Burnham Inside is equal parts hilarious and harrowing 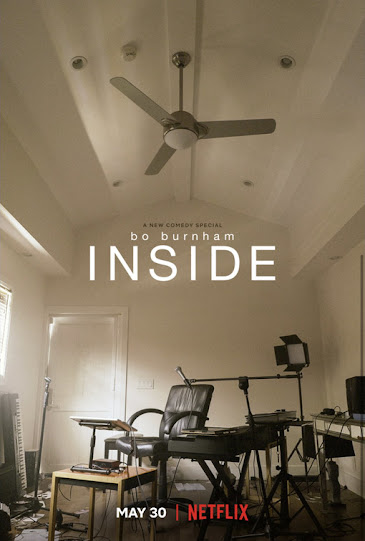 How exactly do we make art about the coronavirus (COVID-19) pandemic?

The last thing most people wanna watch right now is more stuff about this global health crisis, especially since it's still raging in most countries around the world and is still a problem in the United States of America. Still, just because viewers largely want escapism when they watch pop culture doesn't mean one can't comment on the state of the world. You can have entertainment with recognition of real-world trouble just as easily as you can have peanut butter mix with chocolate.

Interestingly, I've found the few movies that have successfully commented on the COVID-19 pandemic to be comedies. Maybe that's the only way we can comment on the ludicrousness of this situation, which includes people refusing to take the bare amount of precautions against this disease. In a grim thriller, this whole event might seem too outlandish. In the confines of a comedy, though, well, the COVID-19 pandemic just feels like another wacky situation Borat would get into or the typical heightened scenario that a road trip comedy like Recovery might incorporate under any circumstance.

Further fueling this theory of mine is the incredible success of Bo Burnham: Inside, which sees the comedic doing a stand-up special within the confines of his own home. The pandemic is keeping Burnham indoors but it isn't stopping him from creating new pieces of comedy. The ongoing health crisis looms large over the entire production, but Burnham avoids the easy jokes about toilet paper shortages or mask discomfort. Instead, the pandemic is used as a springboard for greater reflections on the shortcomings of modern existence. These include the awkwardness of sexting, the exciting but even more terrifying powers of the internet, and a self-centered personality getting in the way of being an ally to marginalized groups.

Throughout it all, Burnham never leaves a single room in his house, though don't expect to discover visual stagnancy in digesting Bo Burnham: Inside. Each new segment employs a fresh visual scheme evoking everything from 1980s training montages to live Twitch streams to children puppet shows. The latter aesthetic comes in one of the most hysterical sequences, in which Burnham sings a happy song about "how the world works." It's clearly supposed to be a riff on Sesame Street and other educational programs. Doing a darkly comic variation on this formula has been done to death, but Burnham makes this concept feel brand new thanks to him tackling such a dark approach to the relationship between puppet and puppeteer.

You see, Burnham's simplified approach to the way the world works gets totally undercut by the sock puppet Socko. He may have a cutesy voice and name, but Socko doesn't mince words in explaining the horrors of modern society, including how "all cops and politicians" are in the service of "corporate elites" rather than wanting to help everyday citizens. In a great piece of dark comedy, Socko's rebellion against Burnham's conformist simplicity gets cut short once Burnham threatens to put this puppet back on his foot. Disturbing, hysterical, all told with a catchy tune you won't be able to get out of your head and impeccably detailed visual flourishes. This little segment manages to be a microcosm of everything that makes Bo Burnham: Inside so special.

Also impressing throughout the special is its open vulnerability, an element expanding upon the closing verses of his Can't Handle This number from his last stand-up special, Make Happy. A line from that song that does "You can say anything if you make it funny, make it rhyme" was running throughout my head while watching Inside as Burnham tackles os many brutally dark topics, including suicide, without alienating the viewer. He makes it funny. He makes it rhyme. But he also makes it insightful. He manages to juggle all of these tonal ingredients without losing sight of authentic introspection into what makes him tick as a person.

This achievement ensures that the thoughtful and poignant parts of the piece can land properly rather than feeling out-of-place. Even a hilarious (and eerily accurate) ditty called White Woman's Instagram makes time for a genuinely touching digression about one lady dedicating a caption to her long-deceased mom. In the middle of all the silliness and inspired comedic lyrics, Burnham does touch your heart and looks at  the people he's satirizing as, well, people. Though cut off from the world due to the pandemic, Bo Burnahm: Inside shows this comedian hasn't lost sight of the humanity of others.

The sight of Burnham stuck in one room using a piano to belt out comedic tunes will remind viewers like myself of Burnham's very first YouTube videos. But Bo Burnham: Inside is no retread of the past. If anything, this whole film is a reflection of how far he's come as an artist both visually and in terms of the themes he tackles. All of that plus reinforcing that the COVID-19 pandemic is best tackled in comedic movies.