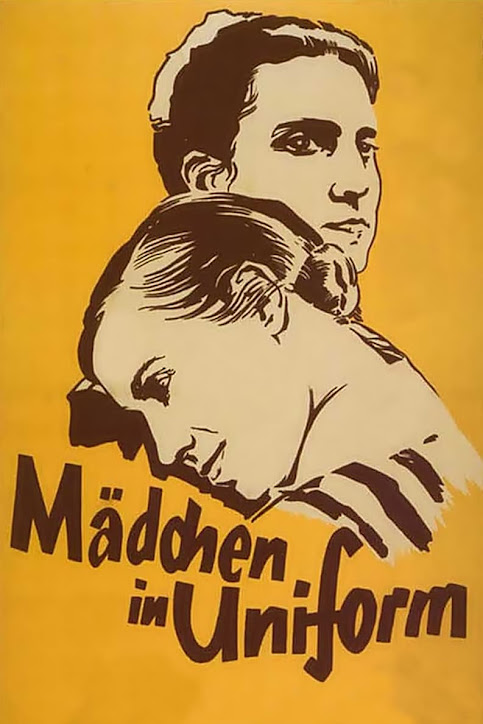 There is this widespread notion that queer people only existed in the modern world. The LGBTQIA+ community is something created in the late 20th-century, because, after all, marginalized populations only exist when they become prominent in pop culture. In reality, queer people have existed for as long as people have existed. Colonial perceptions of sexuality and gender have ensured that these approaches to human sexuality have long been stigmatized. But they've always been there. Case in point: the 1931 feature Madchen in Uniform, which makes no bones about being about queer character. 90 years ago, queer cinema was alive and well.

Manuela von Meinhardis (Hertha Thiele) has been stricken with quite a lot of tragedy in her life, including the loss of her mother at a young age. As Madchen in Uniform begins, she's dealt another harrowing blow. She's now stuck at an all-girls boarding school with a bevy of strict teachers overseeing the institution. However, a warm light at this institution appears in the form of Fräulein von Bernburg (Dorothea Wieck), a teacher who takes Meinhardis under her wing. A bond forms between the two that eventually begins to take on romantic shades, much to the chagrin of Mother Fräulein von Nordeck zur Nidden (Emilia Unda). She doesn't want these teachers to even see the students as humans, let alone form romantic attachments to them.

What strikes me most about Madchen in Uniform is just how distinctly modern it is. Not just in its approach to sexuality but also in its filmmaking. The camerawork, for one thing, is so alive, it's never staccato, it's always on the move. Then there's the impressive editing, which includes a beautiful recurring shot where the faces of Meinhardis and Bernburg are overlaid on top of each other. There's even an ending that eschews tidy wrap-up's in favor of a more ambiguous complicated finale. These all feel ripped from cinematic approaches that wouldn't be common for decades to come. If you showed this to a modern audience, these elements could keep even the most staunchly anti-black-and-white-cinema moviegoer glued to their seat.

It's a testament to the craftsmanship here in Madchen in Uniform that the whole thing feels like it could work in a 2021 movie theater. It's also a reflection on the nimbleness of classic cinema filmmaking. Not all films in this era adhered to the same visual norms, there was a bounty of different creative perspectives flourishing here. On the part of Madchen in Uniform director Leontine Sagan, her perspective is one informed by empathy for young women and the way society irons out their distinctive qualities. Under the watch of zur Nidden, students here are forbidden from sending letters, speaking their minds, and doing anything else that would suggest autonomy. Within this film's central location, Sagan has crafted a physical manifestation of how misogynistic ideas of what women are "capable" of spread and fester.

At the same time, Sagan delivers thoughtful rebukes to these norms. Moments, where Meinhardis and Bernburg do find comfort in one another, are shown to be moments of peace in a constant war on individuality. It's a war known only too well to those in the queer community. You can't even walk down a hallway without worrying about coming off as too "gay" or perhaps indicating a gender you don't publicly identify as. Sagan understands the small ways society breaks down LGBTQIA+ individuals but she isn't just focused on queer misery. She also lends a sense of specific detail to the moments where queer characters do find joy, such as Meinhardis being over the moon over Bernburg lending her a pair of undergarments (Meinhardis didn't have any, you see).

Also, thoughtful emerging on a thematic level is Madchen in Uniform's climactic depiction of what happens when the oppressed work together as a unit. Up until this finale, I didn't fully absorb how much of the teachings at this school were about dividing these girls against one another. Society tells women from the get-go that other ladies are your enemies, be at their throats instead of being their pals. But once Meinhardis is so stricken with grief that she contemplates suicide (from a perch whose height is reinforced to an appropriately woozy degree through Sagan's exemplary camerawork), it's women working together that ends up keeping a tragedy at bay.

It's a touching sight that caps off the proceedings on a note as urgently relevant today as it was in 1931. Let people be themselves. Let women became their own people. Stifling all that individuality only leads to misery. Madchen in Uniform conveys such important concepts with filmmaking so impressive that it makes this production a must-watch even beyond its incredible level of importance to the queer community.

Posted by Douglas Laman (NerdInTheBasement) at 11:40 AM