Velvet Goldmine is another outstanding achievement from Todd Haynes 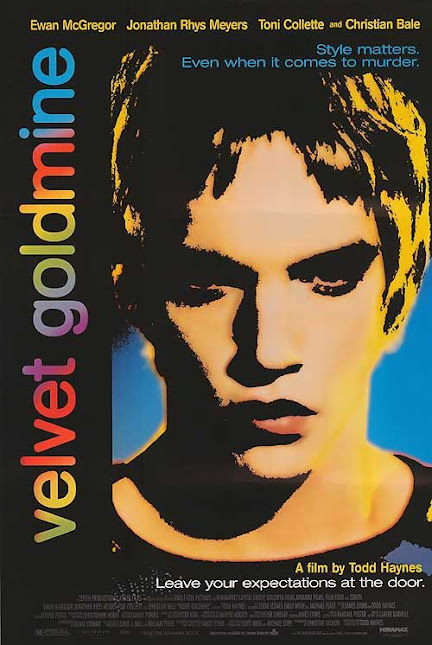 Todd Haynes is one of the most underrated directors working today. Just in terms of visual versatility, alone, Haynes is a powerhouse. He's so good at using an emphasis on empty space in Safe to create an eerie atmosphere while Far from Heaven's homage to the luscious visuals of Douglas Sirk is the perfect example of a pastiche that manages to take on a life of its own. And don't even get me started on Carol, a wondrous film that slides viewers into a dream-like experience of romantic ecstasy. And that's just in terms of visuals! Haynes also excels at pacing, at directing actors, and especially at tapping into the beating heart of his pop culture obsessions.

All those qualities and more are on radiant display in his 1998 movie Velvet Goldmine which is technically a David Bowie biopic but also not. Sure, the film's lead, Brian Slade (Johnathan Rhys Meyers) is a clear stand-in for Bowie. But the film is more than just a hodgepodge of events evoking Bowie's life. Velvet Goldmine is a story about how glorious it can be to see ourselves and who we want to be in our music. It's also a melancholy ode to how the queer revolution of the 70s was snuffed out by the conservative 1980s. It's also a film whose cinematography alone evokes Citizen Kane and Picnic at Hanging Rock with equal measures of success. Like any movie Haynes directs, there's a lot going on in Velvet Goldmine.

The whole movie takes a cue from Citizen Kane and frames itself around a journalist, Arthur Stuart (Christian Bale), seeking answers about a famous reclusive figure, in this case, Brian Slade. Through interviewing those who knew Slade, Stuart and the audience learn about Slade's rise to the top of the music scene as well as his relationship with fellow rock star Curt Wild (Ewan McGregor). The lives of all three men, it turns out, were intersected. As a closeted gay teenager, Stuart found solace in the music of Brian Slade. Meanwhile, music icons Slade and Wild found their own solace in their deep romantic relationship.

The concept of finding sanctuary in an unaccepting world runs deep through Velvet Goldmine. Intolerance for queer people runs rampant all over the world. Where can one go to find acceptance? Well, one can turn on the radio for starters. A scene of teenage Stuart imagining himself pointing to a televised performance of Slade and telling his parents "See? That's me! It's me!" captures beautifully how wonderful of an escape art can be. Maybe you don't see yourself in your neighbors, but you can see yourself in that person rocking out on the stage. If they can be that confident, maybe you can too. Within the chords of a song, hope is found.

The world of movies is littered with films that explored the punk rock movement of the 60s and 70s but few of them rendered this phenomenon with such a human touch as Velvet Goldmine. This isn't run-of-the-mill societal rebellion, this is a pocket of the population that's been outright erased finally speaking up and yelling for good measure! Through combining Haynes' empathetic photography with some exhilarating needle drops, the viewer becomes as enamored with this vividly freeing music scene as the characters. Velvet Goldmine makes you want to toss on all your most brightly-colored clothes and go running in the street. Many movies have touched on the punk rock movement. Few, however, have made the audience feel like they're right in the front row of a 1969 concert.

Velvet Goldmine's gift for using music as a form of unforgettable self-expression is memorably reflected in a series of stylized music videos that make use of everything from a man decked out in glitter-laden blue makeup to a chandelier to a dollhouse. The Ballad of Maxwell Demon is an especially great set piece, with all these outlandish images and creatures really standing out against a plain white background. Also leaving an impact is a Satelite of Love musical number depicting Slade and Wild falling in love. Haynes frames these two here against a blurry background with the wind whipping through their hair and only the suggestion of brightly colored lights. It's such a distinctively-realized sequence that captures how being in love can make one feel like they're in a whole other dimension.

Much like the punk rockers chronicled in Velvet Goldmine, these musical numbers don't even try to adhere to a suffocatingly heteronormative society's narrow definition of "normal" and the movie as a whole is all the better for it. Punctuating all these gloriously over-the-top exhibitions of musical creativity are the framing device sequences with Stuart interview friends of Slade. Here, Haynes uses his visual versatility to render the world in heavy shadows and moody lighting to emphasize how unaccepting the 1980s were. The societally-tolerated homophobia that was always there (as seen by Stewart being berated by his homophobic father in the 1970s) has even infiltrated the punk rock scene. What was once an oasis has now been overwhelmed by the outside world.

It's such a quietly devastating event that Haynes frames with an appropriate sense of sorrow that reverberates off the screen as strongly as the joyous musical numbers. We get to see the freedom afforded by this artistic movement, but we also get to see the tragedy that unfolds when this movement crumbles. Not only is Haynes a versatile artist on a visual level, but this production also allows him to show off his tonal flexibility as well. His multiskilled nature as a filmmaker allows Velvet Goldmine to be as successful as it is covering so much material in one motion picture. Not so much a movie as a jolt of vibrant life, Velvet Goldmine is as unforgettable as the very best David Bowie songs.