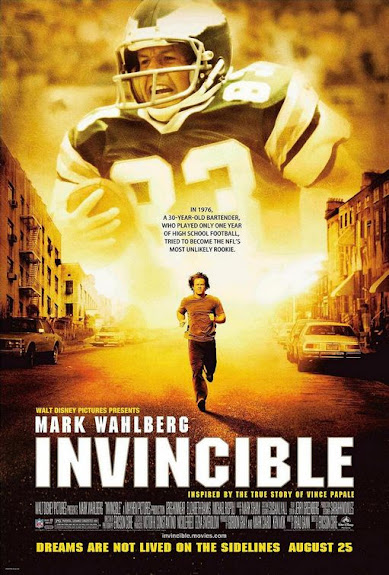 So ended up watching a trio of Disney sports movie from the 2000s in the first week of 2021. It wasn't something I planned to do but you know how these things can happen. Sometimes, a movie groove just emerges and you have to ride it. Anyway, the first two movies in this line-up were Miracle and Remember the Titans, both better than expected, particularly Miracle. But one drawback to watching these two is that they emphasized the ways the final film in this trio, Invincible, came up so glaringly short. Invincible isn't underwhelming because it's a corny sports movie, it's underwhelming because it's a lazily-made corny sports movie.

Invincible chronicles the true story of Vince Papale (Mark Wahlberg), a 30-year-old bartender in Boston, Philadelphia who is as disappointed as anyone else in the recent losing streak of the football team the Philadelphia Eagles. The team's new coach, Dick Vermeil (Greg Kinnear), decides to shake things up by having open tryouts to join the team. Letting anyone try out for an NFL team mostly results in also-ran's but Papale, who goes to the tryouts on a whim, ends up impressing Vermeil. Now training with the Philadelphia Eagles, Papale is gonna have to face all the odds in his path and try to bring inspiration to his hometown friends.

Unlike Miracle and Remember the Titans, Invincible doesn't focus on a whole team of athletes, instead narrowing its focus on just one man. This isn't necessarily a bad approach for a sports movie, as the likes of Creed can attest, but if you do this, you better make sure your lead character is interesting. If one character in Miracle or Titans is half-baked, that's OK, there are enough characters on-screen to make up the difference. Unfortunately, Papale, as rendered here, just isn't all that interesting as a character. Since Invincible begins and ends with this guy, the movie as a whole gets dragged down by an unengaging protagonist.

Part of the problem is that screenwriter Brad Gunn has decided to give Papale a sad backstory so packed with cartoonish tragedies that it becomes unintentionally comical. Papale's wife doesn't just leave him, she leaves him and takes every single item in their house like she's the Grinch stealing from the Who's houses. Then Papale carries around a note she left behind (reading "You'll never be anything") with him everywhere in a character beat that should read as a sign of emotional turmoil but just reads an unintentional comical. Part of the problem is the casting of Mark Wahlberg, who never makes us buy that Papale is a guy going through relentless turmoil.

While Gunn's script tosses so many horrible obstacles at Papale that you half-expect him to turn into The Joker before the runtime is over, Wahlberg's performance is constantly mellow, like he's trying to channel Jimmy Stewart. The dissonance between Gunn's script and Wahlberg's performance makes Vince Papale a character that simply doesn't work. With no other interesting supporting characters to pick up the slack, Invincible becomes a painless but forgettable excursion that goes through every requisite storytelling beat a sports movie like this is supposed to hit

Sure, every sports movie to one degree or another indulge in cliches, but the best ones make those cliches feel brand-new again. The only new concept Invincible brings to the table is in its disorienting visuals under the direction of filmmaker Ericson Core. Dick Vermeil can't give a pretty basic speech to his players without Core twirling the camera around Vermeil like he's the next Michael Bay. At the same time, editor Gerald B. Greenberg keeps cutting to new shots every half-a-second as if he's trying to capture Liam Neeson leaping over a fence in Taken 3. Just let Greg Kinnear give a speech! Stop with all the frantic camerawork and editing! Even worse is all the nauseatingly shaky camerawork in the climactic big game, which robs a potentially inspiring sequence of all its power.

Clearly, Invincible, with all its flaws, doesn't live up to its title.