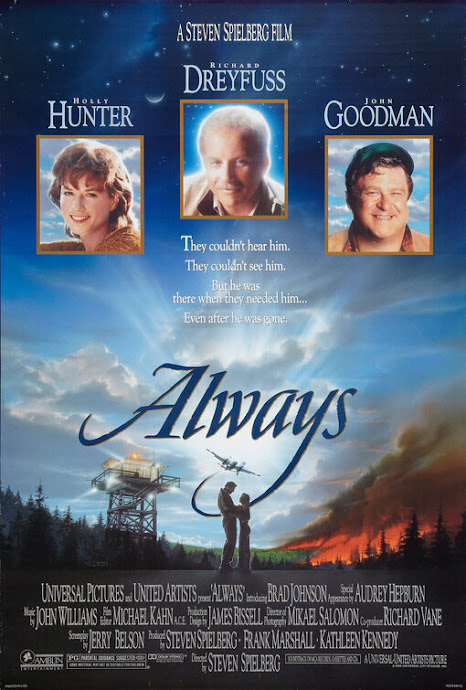 At the end of 2020, I realized that I only had four Steven Spielberg blindspots left. With so few to go, I decided to make one of my first 2021 viewing challenges filling in those gaps in my Spielberg expertise. The remaining films are Spielberg's World War II comedy 1941, the period piece Empire of the Sun, debut theatrically-released directorial effort The Sugarland Express and, the subject of this review, Always. Released in 1990, Always doesn't come up very often in discussions about Spielberg for better or for worse. It's never brought up as an underrated gem nor is it brought up as the nadir of his career. That reputation turns out to be pretty accurate to the overall quality of the actual film.

A remake of the 1957 film A Guy Named Joe, Always concerns aerial firefighter Pete Sandich (Richard Dreyfuss), whose madly in love with fellow pilot and girlfriend Dorinda Durston (Holly Hunter). However, their relationship is complicated by how Pete is a daredevil who is always taking unnecessary risks when putting out fires. Right after committing to moving away and starting up a new safer job, Sandich is killed saving the life of his best buddy Al Yackey (John Goodman). However, Sandich is sent back to Earth as a ghost to help a new young pilot, Ted Baker (Brad Johnson), master the art of flying. Along the way, Sandwich will also have to learn to let go of Durston, whose struggling to move on from Pete's death.

Always is an old-fashioned movie. Save for one scene where Yackey utters "Bullshit!" while telling Durston to get her life together, the dialogue resorts to Disney Channel-level profanity like "beeswax", characters order a Diet Pepsi when they're at a bar, the concept of sex is only implicitly referenced, if at all. Its approach to the afterlife, which consists of Audrey Hepburn appearing as an ethereal figure in a patch of bright green grass, is similarly old-timey. You could have made this thing in the Hays Code era of filmmaking without having to edit a thing. That's not necessarily a bad thing, but Always doesn't use this restrained aesthetic for particularly interesting means.

The comedy, for instance, has its moments of old-school charm, like a recurring visual gag where characters get Yackey to accidentally wipe grease on his face. Other jokes, like an extended piece of physical comedy where a lady's machine goes careening into Durston's front yard, fall flatter. Screenwriter Jerry Belson's approach to romance, meanwhile, is charmingly committed to being old-fashioned, but commitment can only take one so far. When the third-act wants the viewer to clearly be emotionally invested in Sandich and Durston's romance, that's where things go wrong. These two characters have been pleasant to watch, but they've never been captivating.

These two qualities epitomize how Always never rises to use its restrained nature for something truly interesting. It never comments on the era of filmmaking it's homaging nor does it even use it for exceptional escapist entertainment. The whole enterprise just hums along at an agreeable but hardly memorable pace, eventually coalescing into something so lightweight that you expect it to float away. The fact that Always remains mostly pleasant is down to the overqualified cast. Holly Hunter, especially, is way too good to be saying lines involving the phrase "girls clothes". God bless her, though, she still lends such emotional conviction to a story that, on paper, is pretty threadbare when it comes to pathos.

Much of Spielberg's direction is surprisingly generic, but, like Hunter's performance, he has moments where he delivers far more memorable camerawork than the proceedings call for. Spielberg mainstay John Williams is also on hand to deliver a score that won't crawl into your ears but has its share of decently romantic melodies. Looking over the whole cast & crew, Always is packed with so much talent that lifts up the movie as a whole, a trait that turns out to be a catch-22. The presence of this cast and crew in Always makes the movie better, but it also makes one inevitably wonder why they aren't all working on something more worthy of their talents.