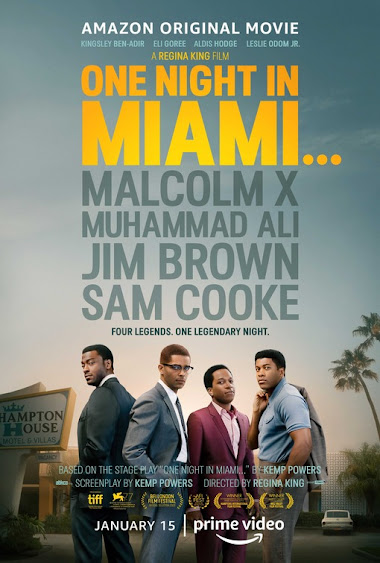 One Night in Miami, based on the play of the same name, imagines a fictitious night in 1964 that united four legends, Malcolm X (Kingsley Ben-Adir), Sam Cooke (Leslie Odom Jr.), Jim Brown (Aldis Hodge) and Cassius Clay A.K.A. Muhammad Ali (Eli Goree). Specifically, in the wake of Clay becoming the new heavyweight champion of the world, these four friends head down to Malcolm X's Hampton House hotel room for what they think will be a roaring party. Instead, Malcolm wants to talk about how they're all contributing to the Black civil rights movement of the 1960s. There's no beer or girls here, just incisive conversations...and also a lot of vanilla ice cream.

The screenplay by Kemp Powers (adapting his own play) strips away the stages and stadiums from these icons and reveals a quartet of human beings. I'm a sucker for artistic works that render everyday people out of mythic figures and One Night in Miami is a perfect example of why. Powers proves so thoughtful in exploring these individual characters and speculating on what makes them tick. Each of our four leads has distinctly different attitudes on what it takes to survive in this world. They're each laid out right away in individual vignettes that open One Night in Miami. Particularly powerful is Brown's encounter with a seemingly helpful neighbor (played by Beau Bridges) in his home state of Georgia. It's a scene that reminds Brown and the audience that bigotry hides even behind the biggest smiles.

Through its opening, One Night in Miami establishes that, much like Steve Jobs or Rope, it'll be a dialogue-heavy movie that never loses your attention. It also establishes how the worldviews of its protagonists have formed. With that groundwork laid, it becomes understandable why these characters would stand resolute in their beliefs during their inevitable confrontations in that Hampton Hotel room. These details make it clear Powers isn't relying on name-recognition to carry audience investment in One Night in Miami. He's made sure to these interpretations of famous 1960s figures can work on their own terms. History informs One Night in Miami's characters, but it isn't the only thing the film leans on.

The vividly-realized personalities make the dialogue-heavy proceedings totally engrossing, particularly when it comes to watching total opposites play off each other. youthful optimism of Clay, for instance, is in fascinating direct contrast to the more experienced and reserved Brown. Sometimes, these opposing dispositions generate laughs. Brown's incredulous reactions to Clay bouncing on a hotel bed had me in stitches. Other times, these differing mindsets cut deep on an emotional level. This is especially true whenever traces of vulnerability emerge in Malcolm X. To see a guy who conveys a commanding presence even when there are no cameras on him exhibit some fragility proves truly haunting.

Speaking of fragility and Malcolm X, man's death hangs like a shadow over One Night in Miami. It's one of the most brilliant ways the movie gains an extra layer of depth. Throughout the movie, Malcolm X is paranoid of people following him. Always looking over his shoulder, Malcolm knows his time on Earth will be short. This lends a sense of urgency into what Clay, Brown, and Cooke think is just another night of partying. For Malcolm X, though, there is no time to waste. Kingsley Ben-Adir's turn as Malcolm X is consistently good but it's especially impressive rendering Malcolm X's determination to cram in as much as he can in the time he has left.

Some of Regina King's best moments as a director are in visually conveying the ominous cloud that lingers over Malcolm X. Especially memorable is one of the final moments of One Night in Miami depicting Malcolm X peering out the window against a neon blue sign to look at two men following him. The glowing blue light cascading off of Malcolm X makes for such a haunting contrast to the emotions this man's going through. Just as the world keeps spinning in the face of the horrors of racial injustice, so too does this neon sign keep glowing even in the face of a man staring down his own mortality. And then there's Ben-Adir's face, which conveys such quiet sorrow. Here, King says so much about Malcolm X without ever needing to resort to dialogue.

It's not the only instance of her filmmaking impressing here. One Night in Miami is her first feature-length directorial effort, but King's already got such a steady hand as a filmmaker. This is true whether she's executing visual gags for maximum humor or just using simple blocking to convey so much about individual characters. The inherently confined nature of this production has brought out King's creativity. Just look at how she uses the minimal amount of locations to ratchet up the tension within the four lead characters. Just like people inevitably turning sour on a long car trip, it's inevitable that everybody would start picking on each other when they're stuck in one hotel room for so long. King makes that lack of space and the vivid personalities of the four leads so impressively tangible.

I also loved how well King gives even the smallest side characters here such distinct personalities, particularly Malcolm X's various bodyguards and followers (one of whom is played by the always-excellent Lance Reddick!) It just makes the world of One Night in Miami feel so richly detailed. Much of those details stem from an all-around exquisite cast, there isn't a dud performance to be found here. My Clemency bias is showing, I know, but my personal favorite of the cast was Aldis Hodge as Jim Brown. I loved that Hodge played Brown like Toshiro Mifune in Sanjuro, this experienced guy who usually sits quietly in the corner but when he speaks, everybody listens. It's such a unique way to depict Brown and one that Hodge pulls off flawlessly.

The scenario One Night in Miami depicts may be fictional but its artistic accomplishments are all too real. Regina King's impressive film makes human beings out of legends. It also turns one hotel room into the backdrop of something you can't turn away from.

Posted by Douglas Laman (NerdInTheBasement) at 9:30 AM