Beanpole is a visually impressive, though sometimes derivative, dive into post-WWII misery 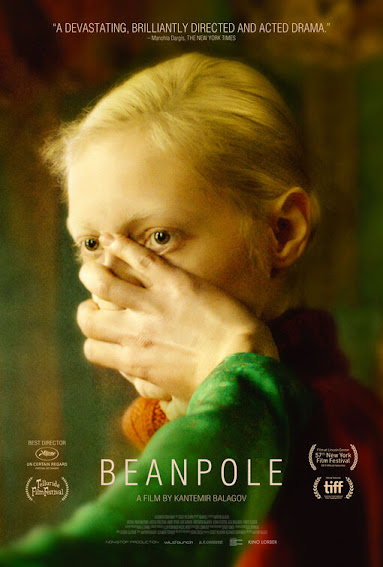 As Beanpole begins, World War II has come to an end. Though the battlefields may be barren, struggles still go on. Iya Sergueeva, A.K.A. "Beanpole" (Viktoria Miroshnichenko) knows that better than anyone as she works as a nurse in a ward where people are recovering from severe wounds that they received during the war. When she's not at the hospital, Iya is taking care of Masha's (Vasilisa Perelygina), child Pashka. Unfortunately, before Masha returns from the front line, Iya accidentally smothers Pashka to death. Masha is now determined to have another child and, unable to conceive of one herself, coerces Iya to have the kid for her.

With Beanpole, writer/director Kantemir Balagov is making a movie about two women searching for ways to endure in the face of constant death. For Masha, the prospect of having a child, that's practically a middle-finger against the inescapable specter of death. It's an intriguing concept to base a whole movie around and equally interesting is how Balagov reflects the individual personalities of the two lead characters in a society where they must always stay silent. If Iya cannot express herself verbally, then certain colors will both become associated with her and offer a glimpse into her personality.

A bright shade of green dominates the majority of the clothes Iya wears. It becomes something of a motif throughout Beanole's costume design and production design. When you spy green in the frame, that's meant to indicate the influence of Iya. This becomes an especially fascinating detail when Masha begins incorporating bits of green into her attire during the third act. It's a subtle symbol of how closely attached the two characters are becoming. Masha may not be able to say that out loud, but the green in her tops says it for her. Colors themselves stand as a rebuke against societal norms stifling individuality and self-expression.

Ksenia Sereda's cinematography makes great use of these colors in a style of camerawork heavy on exquisitely-realized shots that utilize meticulously detailed blocking. Pick a frame, any frame in Beanpole and it's bound to impress you with how well-crafted it is right down to the tiniest detail. I especially love the quiet thoughtfulness informing which characters the camera focuses on during a climactic discussion between Masha and the mother of her fiancee. The cinematography and Balagov's direction work wonders in making it feel like these two characters are the only people on the planet rather than half the participants at a family dinner.

On a visual level, Beanpole is astonishingly beautiful, its rich level of detail and slow-paced visuals reflecting a remarkable level of skill. The script is a touch more pedestrian, at times feeling like it's working down a list of Downbeat European Arthouse Movie Cliches rather than engaging in boldly unique storytelling traits. Dead kids? On-screen depictions of sexual assault? Queer women only being depicted in constant anguish? Hasn't this all been done before? The best parts of Beanpole are when it digs deeper into more specific details when dealing with tragic circumstances. The aforementioned Masha/mother-in-law tête-à-tête, for instance, is a riveting scene while Masha going from jubilation to sorrow while twirling around in a dress is guaranteed to break your heart.

Enough of Beanpole's story incorporates elements like these two scenes to make sure the film as a whole can rise above some derivative pieces. Plus, the lead performances have no trouble functioning as fully-formed idiosyncratic creations. This is particularly true of Viktoria Miroshnichenko in a lead role that sees her conveying so much devastating woe through those pupils of hers. She's one of the best assets of Beanpole, a drama that sometimes gets stuck in familiar territory but mostly registers as a powerful contemplation on how to survive the never-ending stings of war.

Posted by Douglas Laman (NerdInTheBasement) at 11:49 AM