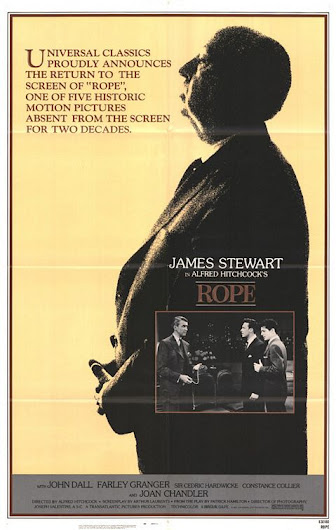 One of Alfred Hitchcock's most famous remarks came when he discussed how good suspense is informed by a tension that only the audience is aware of. To explain this, he described a scene where characters are talking over a table that has a bomb underneath it, a fact that only the audience is privy to. "In these conditions, the same innocuous conversation becomes fascinating because the public is participating in the scene," Hitchcock explained. I was reminded of this talk while watching Hitchcock's 1948 movie Rope, which involves a chest containing a corpse placed into the middle of a party packed with unsuspecting partygoers. Hitchcock was right. In Rope, the most mundane of exchanges become riveting thanks to the audience knowing that there's a dead person in the vicinity.

That dead person is David Kentley, who, as Rope opens, is being strangled to death by Brandon Shaw (John Dall) and Phillip Morgan (Farley Granger) in the duo's apartment. Once Kentley is dead, they stuff the body into a chest and then prepare to host a party that will involve David's parents and his fiancée, Janet Walker (Joan Chandler). Also coming is prep-school housemaster Rupert Cadell (Jimmy Stewart), whose blase attitude towards murder, based on the concept that some people are simply superior to others, informed Shaw and Morgan's decision to engage in murder. As the party goes on, Shaw and especially Morgan become more worried about getting caught while Cadell begins to get nosy as to why Davi hasn't shown up to this party.

The first thing that's worth noting about Rope is that it's fantastic, a masterclass in why Hitchcock has become synonymous with top-shelf suspense filmmaking. The second thing that's worth noting is how this is another great example of how Hitchcock brought out the best in Stewart as an actor. Like his other collaborations with Hitchcock in Vertigo and Rear Window, Stewart eschews his usual everyman screen persona for something much darker. Here, Stewart plays a no-nonsense individual with a bleak outlook on humanity, a total contrast to George Bailey or Jefferson Smith. Also much like in his Hitchcock endeavors, though, Stewart excels in going to darker places.

Stewart's especially a lot of fun in his line deliveries, like how his responses towards characters like Mrs. Anita Atwater (Constance Collier) that just drip with barely-contained frustration at the people he has to talk to. Similarly, Stewart using a sense of assuredness while discussing his grim endorsement on murder is so effectively chilling and makes you see how the seeds of malice in Shaw and Morgan's heads got watered. Anyone whose seen enough of Stewart's work knows he's more than the one-note caricature pop culture parodies of Stewart but Rope is a great reminder of just how versatile he was as a performer.

Also impressing in the cast is Farley Granger, who appropriately puts the viewer on edge in his depiction of Morgan gradually losing his cool as the night goes on. Granger's feat of rendering a consistent personality in Morgan while also displaying the character's gradual descent into paranoia is tremendous. Granger and the other members of the engaging cast are captured through bold camerawork on the part of Hitchcock and cinematographers Joseph A. Valentine & William V. Skall. Rope is told through ten different long-takes meant to simulate that the whole movie is happening in real-time.

This kind of visual approach is always difficult to execute and Hitchcock and company manage to pull it off with aplomb. Even better, it's not just a nifty bit of camerawork trickery. It also works at accentuating the tension of this dinner party. Any minute now, somebody at this party could discover the corpse of David Kentley. Without any cuts to other shots or locations to undercut that tension, one is always on the edge of their seat. Plus, capturing Rope in this manner brings a lot of unique visual details to the table. The best of these is how the view from the apartment's gigantic windows gradually goes from being sunny to so dark that neon signs pour in bright light onto Shaw and Morgan.

Throughout his career, it's apparent Hitchcock knew what he was doing when it came to gripping thrillers. Just look at that aforementioned quote about the bomb under the table. Rope, however, is an especially great example of a filmmaker totally in control of both bold directorial choices and an irresistible sense of suspense.