It's no lion, er, lie to say that Rogue is much better than expected 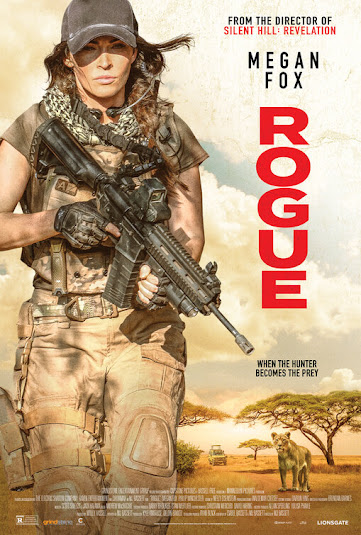 In Rogue, Megan Fox plays Samantha O'Hara, the head of a mercenary group that's been tasked with rescuing Asila (Jessica Sutton), the daughter of a wealthy governor, from human traffickers. Narrowly avoiding the clutches of these foes, O'Hara and her group, which includes Joey (Phillip Winchester) and Bo Yinn (Kenneth Fok), are now hiding out in an abandoned farm that used to kill lions. Turns out, though, they're not alone in this compound. A lioness, who was viciously scarred when hunters tried to kill her, is still here and now she's hunting down members of O'Hara's team. Worse, crime lord Zalamm (Adam Deacon), is on his way to reclaim Asila. O'Hara's gonna have to use all her wits to survive this night and I'm not lion about that.

Something I've grown to appreciate over the last year or two is movies whose charms lie in their messiness. Think Richard Kelly's Southland Tales as a prime example of this. Sometimes, cohesion does not automatically a masterpiece. It can be just as interesting to see something that's disjointed but ambitious rather than something that runs smoothly but takes no chance. So it is with Rogue, a movie that's part military drama, part Alien but there's a lion and part sincere National Geographic ode to wild animals. Many movies feature gunfights, sure, but how many of them pause their plot so one supporting character can briefly encounter a pack of wild elephants for no other purpose than to remind viewers how awesome elephants are?

Those are the kind of bold swings writer/director M.J. Bassett (who penned the screenplay with her daughter Isabel Bassett) takes in bringing Rogue to life, along with other distinct creative choices like incorporating a Backstreet Boys song as a form of male bonding. Not all of these choices work, but enough of them do to make Rogue noticeably better than your average B-movie, especially one hailing from Grindstone Entertainment. It helps too that Bassett excels as a filmmaker with the second-act that functions as a suspense thriller. With the electricity out at the compound, that hungry lioness could be hiding around every corner. That uncertainty informs a really well-done air of suspense.

If there's a big gripe to be had with the script for Rogue, it's in our human villains, who are unfortunately much more generic than the movie they occupy. Once again, an American action movie has baddies who talk about how their actions are for Allah and wear garb associated with Middle Eastern cultures. Most weirdly enough, Rogue awkwardly tries to lampshade this problem by having Zallam make mention that his actions are motivated by not being accepted in Britain due to his skin color and religion. Being aware of real-world bigotry against Muslims or any other marginalized population, though, doesn't get you off the hook for uncomfortable stereotypes.

Otherwise, on a character level, Rogue is actually decent. We get just enough distinct character dynamics to give the action some heft and the eventual friendships that form between the lady characters functions as genuinely sweet. And then there's Megan Fox in the lead role, delivering a performance that reminds us all how it's utter poppycock that she's been stuck in actor jail for so long just because she criticized Michael Bay. Anyone whose seen Jennifer's Body knows Fox has got plenty of talent as a lead performer and through her work in Rogue, viewers get to see that she's got the chops to function as an action lead.

Believable as a figure of authority, equally authentic in moments where her character does have to open up a little bit and she handles herself well in the fight scenes, Fox lends Rogue's protagonist a withdrawn aura that's unique among female action heroes. It's all a very nice performance that compliments an all-around enjoyable ensemble cast. The performances are another instance of Rogue not being game-changing but certainly better than expected, with Bassett's direction and Fox's lead performance serving as the best parts of the whole enterprise.

Posted by Douglas Laman (NerdInTheBasement) at 9:48 AM