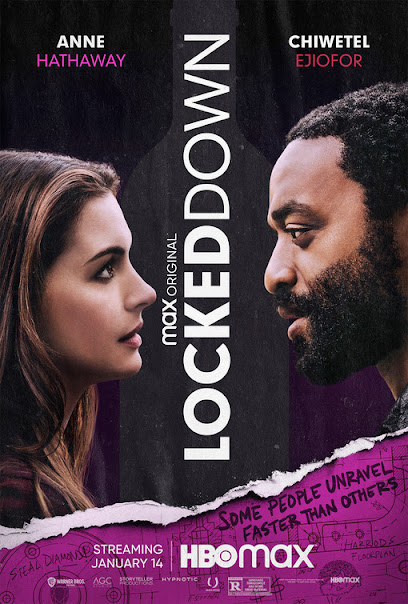 Movies have always commented on the times they were made in. The 1940s are littered with movies about World War II while the 1970s had movies that tackled the political unease the marked the decade. However, those films tackled events that had already happened. The 1942 film Mrs. Miniver, for example, chronicled events, including the lead-up to the Dunkirk Evacuation, that occurred two years prior. The 1976 movie All the President's Men, meanwhile, chronicled Watergate, which happened four years prior. Even just a handful of years of distance, these movies could have a clearer eye on recent major events and how they impacted people. It's hard to make that kind of art when you're living in the middle of major historical events.

That's what makes movies about the COVID-19 pandemic like Locked Down so strange. We're still in this ongoing health crisis, lives are still being lost by the thousands to this disease. The concept of making escapist art about the matter already feels kinda queasy. But more urgently, we're not out of the pandemic yet. There's no way for artists to really absorb this horrifying experience. How can a movie help people cope with a tragedy when it doesn't even fully grasp the tragedy at hand? Rather than illustrate how movies can effectively respond to reality, all Locked Down has to offer is a generic Who's Afraid of Virginia Woolf? knock-off that turns into a subdued dialogue-heavy heist movie in the last half-hour.

Linda (Anne Hathaway) and Paxton (Chiwetel Ejiofor) are a couple whose relationship was already on the rocks long before the COVID-19 pandemic forced them to stay indoors together. Now, there's nothing to distract them from their problems with each other. Linda works as a CEO for a company she hates while Paxton is a former daredevil convinced the world is out to get him. Even beyond the lockdown that's keep them indoors, they both feel trapped. But there could be a way out. Linda's company is transporting a valuable diamond to a corrupt client. What if she and Paxton took the diamond for themselves? This couple that can't stand each other are gonna have to work together to pull off a COVID-era heist.

Director Doug Liman and screenwriter Steven Knight are journeymen artists who have delivered their fair share of noteworthy films over the last two decades. Locked Down is not one of them. The inherent restrictions of making a new movie during the pandemic (Locked Down was shot in London in October 2020) have not spurred extra creativity on the part of Liman and Knight. Liman, a director more experienced with explosions than emotions with prior works like Edge of Tomorrow and The Bourne Identity, is ill-suited for an intimate piece like this. In-person conversations between Linda and Paxton are stagnantly framed and moments of comedy are poorly-executed.

Knight's script, meanwhile, struggles with getting the viewer invested in these characters. It's just hard to root for two people who live in a lavish home and are only defined by their hatred for one another. Knight also struggles to figure out if Linda and Paxton should have gravely serious relationship drama or just trade tired COVID-era jokes about remembering to wear a mask. That level of indecision makes it easy for the viewer to just zone out and not care. Hathaway and Ejiofor are talented actors with enough charisma to make it a painless exercise but even they can't salvage the inert script for Locked Down.

Eventually, Locked Down decides it's done being an empty relationship drama and that it wants to now be an empty heist movie. This section of the movie, which sees the duo invading a Harrods department store to get that lucrative diamond, has moments of personality mostly from utilizing unique assets of a Harrods store, such as a large dining area. Those moments are fleeting, though, and Locked Down doesn't create the kind of tension you need to make any heist movie work. The fact that we're not invested in the characters only makes it extra tedious. Movies have an incredible power to comment on real-world events like no other medium. Unfortunately, Locked Down feels irrelevant to the COVID-19-era it's depicting as well as any era of history that has standards for entertaining filmmaking.

Posted by Douglas Laman (NerdInTheBasement) at 11:17 AM