This is Spinal Tap is a rocking good comedy 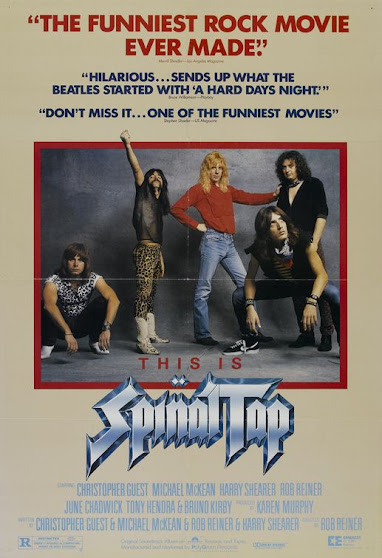 It's staggering to consider just how influential This is Spinal Tap has ended up being on the world of filmed comedy. While it wasn't the very first instance of mockumentary, Spinal Tap popularized the format and its impact on both big-screen and small-screen comedy has been undeniable. Single-camera sitcoms like The Office and Modern Family owe a lot to Spinal Tap proving that the documentary format could be used for laughs. On the movie side of the equation, would anyone have thought Borat would be possible without This is Spinal Tap? A new era of comedy broke open with This is Spinal Tap, but even divorced from that larger context, the film itself still registers as riotously funny.

This is Spinal Tap chronicles a fictional rock band called Spinal Tap, whose principal members include David St. Hubbins (Michael McKean), Nigel Tufnel (Christopher Guest) and Derek Smalls (Harry Shearer). Their exploits in their first North American tour in years are chronicled by filmmaker Martin Di Bergi (Rob Reiner, who also directs the actual movie). As they try and perform their gigs, the band is constantly faced with major problems, like malfunctioning sets, small crowd sizes, and disagreements between members of the band. At least the music is always rocking and band manager Ian (Tony Hendra) can handle any problem...right?

Some of the most amusing moments of This is Spinal Tap come from the inherent realism of filming this in the style of a rock documentary. There isn't a sweeping score or other grandiose touches to distract from awkward pauses in conversations. Those little lulls of silence are critical to why so many moments in This is Spinal Tap are as hysterical as they are. They aid the timing of subsequent humorous lines tremendously well. Another great realistic touch that would be hard to accomplish in a traditional film is the ramshackle way people talk with each other. The members of Spinal Tap are always talking over each other while describing matters like how their previous drummers died. These moments ring with as much authenticity as it does with humor.

Reiner takes total advantage of the unique comedic opportunities afforded by doing a mockumentary and that makes This is Spinal Tap such a comedic treat. The fact that Reiner and company clearly did their homework and captured all the tiniest details of actual rock n roll docs from the 1970s is just icing on a delectable comedic cake. When you're parodying something, you've got to show that you've actually studied what you're lampooning, otherwise, you'll end up with a Meet the Spartans. That's the sort of attention that's clearly been lavished on This is Spinal Tap.

Plenty of attention has also been given to the songs that Spinal Tap performs throughout the runtime. Their songs show a wide range of musical influences, with flashbacks to the earliest Spinal Tap singles clearly evoking the earliest Beatles tracks while later songs like Sex Farm have a punk rock edge to them. No matter what musical aesthetic they're channeling, the songs, much like the works of Weird Al Yankovic or Rachel Bloom, have uproarious lyrics but are also just catchy tunes in their own right. I've been listening to the official This is Spinal Tap album constantly since watching the movie! This is Spinal Tap doesn't just offer a sharply-rendered parody of rock band documentaries. It also manages to deliver a rock band you can earnestly jam out to. Only a film as widely influential as This is Spinal Tap could have its cake and eat it too like that.

Posted by Douglas Laman (NerdInTheBasement) at 11:03 AM