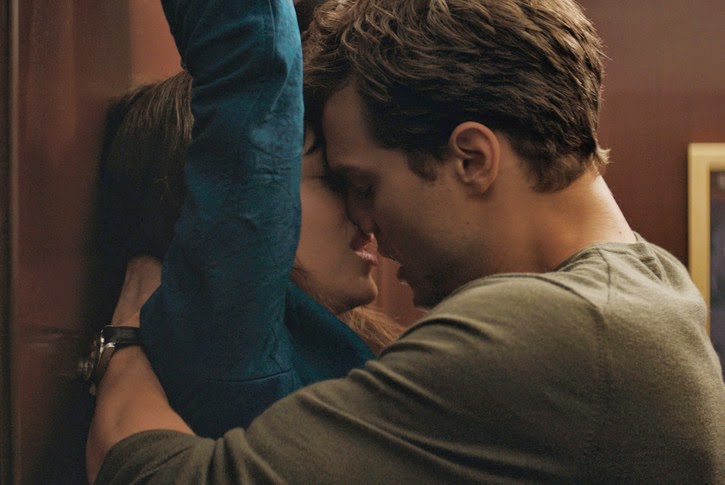 And so, one of the most anticipated features of 2015 arrives this weekend. Christian Grey and Anastasia Steele finally debut in the widest opening weekend theater count for an R-rated movie, an appropriate milestone for a hugely anticipated feature. But how high can it go? And will Kingsman: The Secret Service manage to drum up respectable business as well? Let's take a look at this Valentine's Day weekend, shall we?

Adapting a best-selling book for a film adaptation has been a common Hollywood trope since the earliest days of cinema; for instance, before the 1939 version we all know and love was released, The Wizard Of Oz was adapted to the silver screen back in the days of silent film. This tactic's success has been reinforced in recent months, with two R-rated book adaptations (Gone Girl and American Sniper) going on to garner huge success. Fifty Shades of Grey should have no problem continuing such monumental success, especially with all the buzz it's been able to generate.

The more steamy, overtly sexual material of the book has been at the forefront of this movies marketing campaign, which has helped it garner plenty of attention. Other aspects of the marketing (like the actors obvious distaste for each other in interviews and other promotional stunts) have generated negative buzz, but there's no way that can topple the kind of hype Fifty Shades Of Grey is currently receiving. Helping matters is how it'll make for a nice date night option over Valentine's Day, despite it's more risque content.

Yesterday, Fandango announced this movie was the fourth biggest advanced ticket seller in the companies history, narrowly edging out The Twilight Saga: Breaking Dawn (Part One) to number five. That film made $138 million on it's opening weekend, though with an R-rating limiting it's audience to solely adults, there's very little chance Grey hits those heights. It also has to be said that Fandango's best advanced ticker seller list isn't the best indicator for how a movie will fare on it's opening weekend; of their five best sellers of all-time, only one of them wound up having one of the five best opening weekends of all-time. Still, this incredible achievement shows that Fifty Shades of Grey is about to have a humongous weekend, and could even take the Biggest February Opening Weekend crown from The Passion Of The Christ if it manages to really break out.

The only movie opening against the S&M voyages of Fifty Shades of Grey looks to also do solid business, the film in question being Kingsman: The Secret Service. This spy adventure has received excellent reviews, and has had a similarly high quality marketing campaign. Ads have done a great job emphasizing the talent involved (like Michael Caine, Samuel L. Jackson and Colin Firth) and conveying a tone of rip-roaring fun that contrasts nicely with more seriously toned blockbusters (like Jupiter Ascending and The Seventh Son) currently out in the marketplace.

The holdovers in the marketplace should get a nice boost from Presidents Day weekend, with The Spongebob Movie: Sponge Out Of Water likely getting the biggest boost. Past family movies from 2011-2014 with their second weekend falling over the holiday have had an average dip of 28%, and while more middling word-of-mouth will likely give Spongebob a higher dip, it's hard to see the film dipping more than 35%. On the other hand, Jupiter Ascending and Seventh Son will likely lose about 50% even with a holiday weekend at their disposal, while American Sniper will surely get another solid weekend over the holiday frame. Look for that Chris Kyle biopic to lose about 30% for the weekend and cross $300 million, becoming only the third movie from 2014 to accomplish that feat.