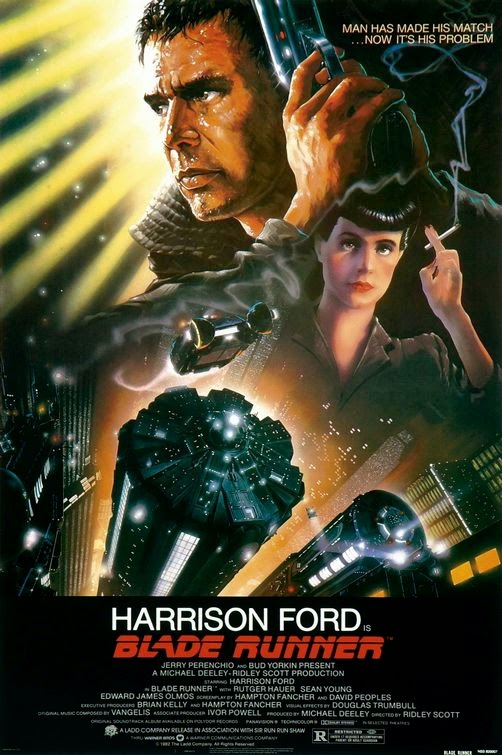 The most notable visual aspects of film noir are some of the more distinctive ever put to cinema, and it's quite a treat to such unique attributes put into the sci-fi realm of Blade Runner, a 1982 film that constantly surprised me in it's innovation. It uses those aforementioned tropes of film noir to create a future, set in 2019. overwhelmed with uncertainty (and rain, there's lots and lots of rain here).

There's a lot of mythology in Blade Runner, which necessitates an opening crawl explaining the role of Replicants (advanced robotics that look exactly like humans, but are banned from setting foot on Earth), not to mention voice-over narration from Rick Deckard (Harrison Ford) that helps explains his motivations and inner turmoil. Voice-over narration can be a tricky thing to pull of in cinema, but I found it to work here nicely, mainly because it seems to fit in with the film noir conventions I grew up knowing (primarily thanks to the Calvin & Hobbes character Tracer Bullet who had similar inner monologues).

All of those tactics are utilized to help get across this sprawling world, but it's to the movies credit that things are kept surprisingly simple in terms of an overall plot. Rick has to track down five Replicants that are on Earth, while the leader of these robots, Roy (Rutger Hauer), attempts to make sure he and his fellow robotic comrades evade capture. Keeping the plot so free of clutter helped me get more invested to the characters and the world they live in.

Speaking of that world, holy hell, every inch of it is magnificently realized. There's so much attention to detail that helps make it feel like a full lived-in environment, with little touches like vandalism on a communication device Rick uses really helping to make this depiction of Los Angeles such a captivating dominion.  The fact that visuals and characters remain so interesting throughout the film without either element overwhelming the other is an impressive feat and one Blade Runner pulls off constantly with no shortage of intelligence.

Weirdly though, perhaps what most impressed me about the feature was it's climax, which is another example of the movie reducing things to their simplest and most effective elements. The setting is an abandoned apartment building, and solely involves Rick and Roy in hand-to-hand combat. There's no problem with larger scale action sequences, but this specific story needed a more straightforward finale, which thankfully the movie is more than kind enough to deliver. It's a sequence full of thrills, but also sorrow contemplation, a kind of balance that renders the scene a nice demonstration of the kind of fascinating experience that Blade Runner truly is.
Posted by Douglas Laman (NerdInTheBasement) at 7:36 AM