The Souvenir: Part II is the best kind of sequel 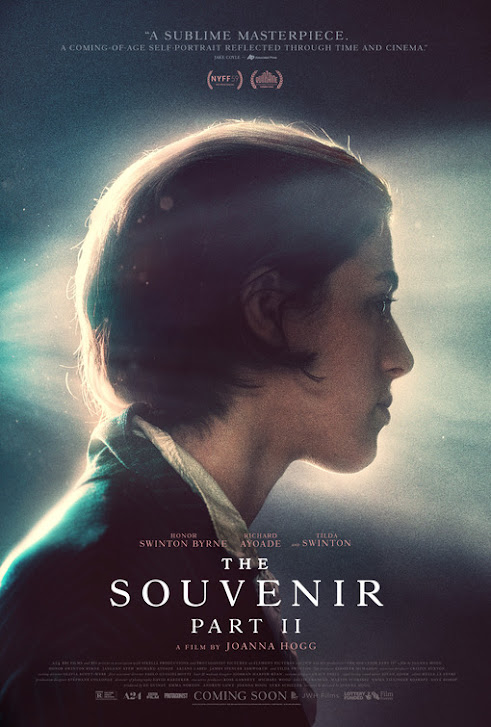 The Souvenir: Part II opens on a sunny day, but also a day marked by death. It's a reflection of how much Julie (Honor Swinton Byrne) is recovering from the death of her boyfriend Anthony (Tom Burke), a heroin addict who perished from an overdose. Even when the sun is shining, the loss of Anthony is impacting her mind. Navigating where to go next, Julie, a film school student, decides to throw herself into her graduate project. This feature is an autobiographical film about the relationship between herself and Anthony. Coping with the loss of a loved one is never an easy experience. Neither is making a film. Writer/director Joanna Hogg embraces all the messiness of both processes to capture the emotional turmoil Julie is going through.
The Souvenir: Part II is many things, but one of the most striking aspects of it is how it serves as a 106-minute treatise on how to do a sequel right. The world of the original Souvenir gets deeper here, not necessarily bigger. Meanwhile, Hogg trades the calm Yasujiro Ozu-inspired long static takes of the original for more varied visual means here. These include constantly shifting aspect ratios between "reality" and in-universe interviews and movie footage. Hogg isn't just rehashing what already worked in the original film. She's using new emotional circumstances for the character of Julie to try out new things. A sequel is an opportunity for bold experimentation, not just echoes of the past.

One particularly interesting new theme brought to the Souvenir table this go-around is the relationship between a person and the art they create. Julie's film is so ripped from her own life that she brings her own bed, the one she and Anthony used to lie in, to the set as a prop. Therefore, it's inevitable that The Souvenir: Part II would have to comment on the dynamic between a creator and their creations. This commentary manifests in interesting ways throughout the film, including how I sometimes wasn't sure if scenes in Julie's apartment were taking place in her home or on a film set replicating her house. For Julie, there are only the thinnest lines dividing this student film and her experiences, and Hogg conveys this to the audience in a compelling manner.

Meanwhile, a remnant of the original Souvenir is Hogg's affinity for restrained emotions. There are only two instances of louder arguments in the entire runtime of The Souvenir: Part II. Otherwise, this is a buttoned-up movie to its very core. I sometimes found that a tad alienating in the original Souvenir, but here in The Souvenir: Part II, it works so well lat capturing the quiet woe Julie is living with on a day-to-day basis. As we begin the story, enough time has already passed since the death of Anthony that it's not something that immediately reduces Julie to tears. It's an experience that's left a hardened shell felt in her murmurs or lulls between sentences. Hogg's subdued approach to emotions works so devastatingly well here at capturing the experience of someone who has had to live with a tremendous loss just being a part of their everyday psyche.

The thoughtfulness with which The Souvenir: Part II approaches Julie's pain is also felt in the parallels between the struggles of coping with loss and with making a student film. Hogg avoids too on the nose cutesy connections between the two (thus fulfilling one supporting character's insistence to Julie to "avoid being obvious" when it comes to her filmmaking), instead, finding quiet ways for these experiences to mirror each other. Julie's indecisive nature on the set, especially, is rendered quite well as a physical manifestation of the character being unsure of where to take her life next in the wake of Anthony's passing. Tragedy hasn't inspired Julie to become a perfect artistic prodigy. It's just reinforced the fact that she's a human being, like everyone else.

This underlying exploration of navigating the unending winding road of coping with a massive loss lends quiet layers of poignancy to even the most throwaway conversations in The Souvenir: Part II. Speaking of conversations, boy did I love every exchange between Julie and her mother, Rosalind (Tilda Swinton). It's rare to see a mother/daughter dynamic like this one, not wrought with endless conflict, nor filtered through rose-colored glasses of perfection. There's just a warmth and a realism (both qualities helped by the characters being portrayed by a real-life mother/daughter duo) in their rapport that's so elegantly simple, yet compelling. Years of experience emanate off their conversations and make the world of The Souvenir: Part II all the more lived-in.

Just through exploring these kinds of chats and subtle ways of grappling with loss in everyday life, The Souvenir: Part II already had me hooked. Then Joanna Hogg delivers a bravura closing sequence that travels through all kinds of filmmaking styles (from Ingmar Bergman to Pressburger & Powell!) that had my jaw on the floor. It's such a vividly-realized set-piece on so many levels and a perfect encapsulation of how reality and cinema bleed together throughout The Souvenir: Part II. There's no way to teach an artist's personal life from the work they produce. That can be a daunting truth, but it's also one that serves projects like The Souvenir: Part II incredibly well.

Posted by Douglas Laman (NerdInTheBasement) at 10:08 AM