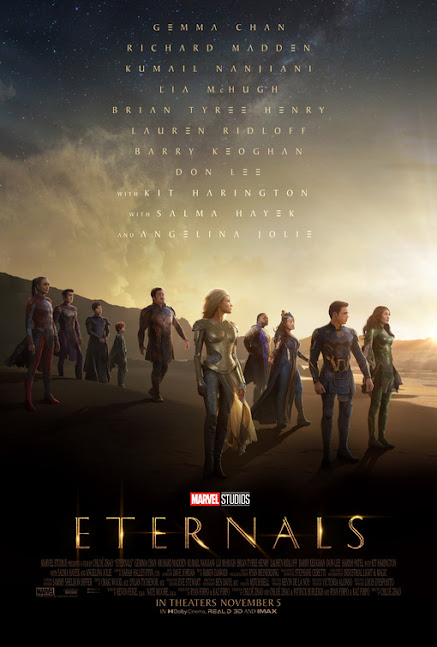 The fact that Eternals features both Merle Haggard's Mama Tried and Foreigner's Feels Like The First Time on its soundtrack should give you an idea of just how expansive this project is. Eternals takes viewers all over Earth and then ventures out into the deepest reaches of space. It features a cast as large as its runtime and attempts to merge Jack Kirby's unabashed cosmic weirdness from the original comics with Chloe Zhao's melancholy intimacy. The result is a jagged creation weighed down by adhering to certain superhero movie conventions and key character beats getting lost in the tidal wave of ideas. However, it also evokes Ang Lee's Hulk in registering as an oftentimes compelling fusion of a blockbuster and something much more personal and offbeat.

7,000 years ago, the Eternals, a race of immortal superpowered beings, were sent to Earth by the God-like entities Celestials to defeat the nefarious monsters known as the Deviants. The Eternals consist of superpowered folks like Sersi (Gemma Chan), Ikaris (Richard Madden), Thena (Angelina Jolie), Kingo (Kumail Nanjiani), and Makkari (Lauren Ridloff), among others. After spending centuries fighting Deviants and watching over humanity, the Eternals go their separate ways and proceed to fade into the rest of human society.

Flash forward to the modern world, where everyone's taken on everyday jobs to conceal their identities, Sersi works as a teacher, Kingo is a Bollywood movie star, the distant Druig (Barry Kheogan) leads a colony of humans under his mind control, just to name a few. All of these existences get upended once the Deviants suddenly resurface. Causing mayhem across the planet again, the Eternals will need to re-assemble if they want to save this planet. However, a new powerful member of the Deviants is causing unprecedented trouble for the Eternals and even these immortal beings will find themselves with their backs against the wall.

Within the first few minutes of Eternals, which begin with a long wall of text explaining the backstory of these characters and rigid lines of "affection" between Sersi and Ikaris, it's clear Eternals will be more of a serious cosmic adventure rather than the comedic outer space romps of Guardians of the Galaxy and Thor: Ragnarok. This isn't a bad approach, since it fits right into Zhao's wheelhouse and allows Eternals to linger on the horrors these ancient superheroes have witnessed in their time on this planet. Druig explicitly references genocide, while a memorably powerful scene depicts inventor Phastos (Brian Tyree Henry) weeping at the carnage wrought by the atomic bombing of Hiroshima.

Best of all, Zhao and fellow screenwriters Patrick Burleigh and Ryan and Kaz Firpo do a remarkable job making each of the titular heroes distinct from one another. Eternals has ten superheroes to juggle, but a mid-movie chat in a building in the Amazon made me realize how well the film had rendered each of the Eternals introduced up to that point. Their posture, dialogue, placement in the room, all displayed unique perspectives that ensured the team wasn't just one superhero repeated ten times over. The uniqueness of the individual players makes eventual discussions over whether it is better to be loyal or personally fulfilled all the more intriguing to watch unfold.

Unfortunately, the dense script can easily lose track of its more interesting character details. Eternals has a bad habit of starting and ending its characters in interesting ways but forgetting the crucial connective tissue between those two points. Certain plot threads, like a personal issue related to Thena, also distractingly vanish once the third act arrives. Speaking of that section of the story, the finale of Eternals has some creative flourishes, but too much of it is random cosmic noise that doesn't gel with the serious tone of the preceding film. Up to this point, there's been such an emphasis on a melancholy tone and character details, and those interesting qualities get lost once everyone has to focus on punching.

Meanwhile, the primary foes of Eternals, The Deviants, are a disappointing lot, a bunch of CG monsters without much personality. That's true even of the one Deviant who can speak and gets a name (albeit only in the credits), Kro. His first monologue is riddled with hysterically didactic dialogue while his presence in the finale feels like an afterthought. Much like those digital Hulk Poodles from The Hulk, Kro and The Deviants feel out of place in a comic book movie that's at its best being introspective and quiet. These characters need to have more depth and concrete personas beyond just being snarling beasts. At least the scenes where the Eternals fight these gigantic monsters are exciting on a surface level. Zhao does a good job finding creative ways for the varying superpowers of the Eternals to bounce off one another when they're in combat while these skirmishes are filmed crisply.

As a whole, Eternals looks stunning visually, with the screen constantly peppered with bright colors that dazzle the eye. Even subdued locations like Sersi's apartments or that room in the Amazon are coated in light green and yellow hues, respectively, while the castles of Babylon are drenched in pleasing shades of blue. When they're all suited up, the Eternals themselves get glorious costumes decked out in similarly bright tints. The emphasis on real-world locations and richly-detailed sets also turns out to be a wise choice. Combining all that natural light with the over-the-top costumes provides a consistently interesting visual dissonance and subtly reinforces the emotional tangibility of the internal crises these Eternals are navigating. The only drawback to utilizing practical backdrops like these is that the instances of green-screen work do stand out like a sore thumb.

The storytelling shortcomings of Eternals, including an awkward ending that leaves things on a frustrating cliffhanger, reflect a movie whose ambition sometimes exceeds its grasp. But when it grabs ahold of that mixture of intimacy and cosmic spectacle, Eternals does manage to channel an aesthetic totally unique to the Marvel Cinematic Universe. There are individual scenes in here that are already lingering in my mind longer than the best scenes in overall more cohesive efforts from Marvel Studios. Plus, even in the moments where the contemplative nature of Eternals gets drowned out by action, Zhao lends a capable hand behind the camera that had me consistently engaged. One of the messiest movies in the Marvel Cinematic Universe, Eternals, like Ang Lee's Hulk all those years ago, proves that a jaggedly assembled superhero movie can still be a mighty interesting thing.