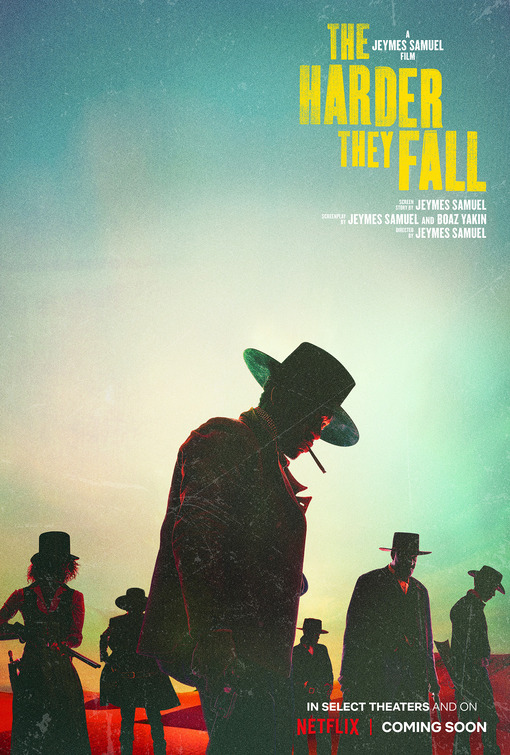 Short film director Jeymes Samuel makes his feature-length directorial debut on the new Western film The Harder They Fall, which stars Jonathan Majors as Nat Love. A real-life figure, Love here is shown to be a man haunted by the murdering of his parents by notorious outlaw Rufus Buck (Idris Elba). Love spends his days being a gun-slinging outlaw and tracking down the folks responsible for the death of his mom and dad. One person who hasn't earned a bullet from his gun, though, is Buck. That man's been put in prison...until today, when Buck's loyal followers, including Trudy Smith (Regina King) and Cherokee Bill (Lakeith Stanfield), break Buck out of a prison cell on a train. Turns out the government has given Buck a pardon and now this man is free to go back out into the free world.

Once he steps off that train, Buck and his assistants take over the town of Redwood. Now that he's no longer a wanted man, officers of the law can't go after this criminal mastermind. But someone who exists outside of the law, like Love or companion Stagecoach Mary (Zazie Beetz), they could have a chance to take Buck down. It's time for some wild wild revenge in the wild wild west.

I kept waiting on the edge of my seat in The Harder They Fall for this movie to fulfill its potential and be something special. As it stands, it's a perfectly serviceable but not altogether engrossing Western, but gosh, the ingredients are here for something far more than that. The cast alone (featuring Delroy Lindo and Danielle Deadwyler in memorable support turns) is great and both the production and costume design are packed with vibrant colors that set this apart from so many other grimy modern Westerns. A street will have storefronts covered in colors more associated with a bag of M&M's than an old monochromatic John Wayne vehicle, it's so lovely to watch.

Plus, it's cool that the film is a take on the Western that doesn't feel like it's just mining nostalgia for past entires in the genre. The whole movie comes off as an attempt to give the current young generation an original Western to call their own. Characters trade back-and-forth banter that feels more at home with how modern quippy film characters speak rather than a 19th-century vernacular. Meanwhile, the zippy use of upbeat modern songs during big fight scenes will feel natural for a generation that's grown up on Baby Driver and Guardians of the Galaxy. Other modern visual touches, like the use of split screens during a tense negotiation on a train or the employment of a trunk shot in a time where there were no automobiles, also come off as welcome ways of making the Western feel new for younger viewers.

These unique visual touches are, unfortunately, let down by a screenplay that has some familiar faults. Though it's a distinctive entry in the world of Westerns, The Harder They Fall suffers from shortcomings that plague a lot of Netflix original movies. PIXAR movies have buddy road trip movies, Tim Burton loves outsiders, and Netflix genre fare loves running way too long. Whether it's Bright, Project Power, or Sandy Wexler, popcorn entertainment from this streamer just stretches on for an eternity. The Harder They Fall is, unfortunately, no exception. Running about twenty (at least) minutes too long, the simplicity of this Western's story would be a welcome departure from convoluted narrative norms if its runtime was more succinct.

Without enough plot to fill the runtime, The Harder They Fall ends up feeling like it's spinning its wheels, and not in a fun way. Also proving frustrating is that, despite the elongated length, the characters in this film rarely end up getting much in the way of dimensions. Majors has movie star charisma to spare, but he oddly vanishes for the second act of The Harder They Fall, a missed opportunity to give him more time to develop Love or even just charm the viewers. It's also disappointing that Beetz's Stagecoach Mary ends up a captive for so much of the story. Beetz has a compelling aura in her screentime, I kept yearning for her to have more to do than being stuck in a jail cell.

Still, even with these narrative faults, The Harder They Fall never becomes painful to watch. A cast packed with engaging faces, some great tunes on the soundtrack, and a steady supply of shootouts ensure there's usually something on the screen that's interesting. However, with all the ingredients in place to bake a one-of-a-kind cake, it's disappointing that The Harder They Fall ends up delivering a pastry that I felt like I'd tasted before. Though certainly better than other attempts at modernizing the Western like (shudders) The Lone Ranger, The Harder They Fall does prove to be a frustratingly average endeavor.