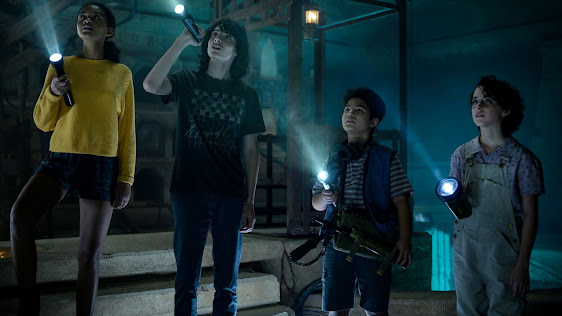 THERE BE SPOILERS AHEAD

The most unrealistic thing in Ghostbusters: Afterlife comes during the scene where Paul Rudd gets chased by a demon dog in Wal-Mart. At one point in this sequence, the beast is going so fast that, when it turns, it crashes into a mannequin displaying some clothes you can buy at this location. No Wal-Mart in the history of humanity has mannequins displaying merchandise! This isn't JcPenny's, Dillard's, or even Target! I found myself chuckling at Afterlife's insistence on utilizing this department store chase scene norm despite the fact that the chase scene's backdrop has no mannequins.

More pressingly in terms of spoilers is the moment where Jason Reitman and Gil Kenan's screenplay really goes off the rails. Once Gozer is unleashed on the mortal world, ghosts spring up all over a small Oklahoma town. Meanwhile, the founder of this town, Ivo Shandor (J.K. Simmons), who's been kept alive in a chamber for decades, attempts to work with Gozer since he's been worshipping her for ages. Shandor is promptly torn in half by Gozer, ending that plot thread promptly. Shandor, a character first mentioned in the original Ghostbusters, is meant to be a red herring villain, but his presence is so nebulous up to his demise that when he bites the dust, there's no impact. It's just another noisy development in a segment of Afterlife that dumps a lot of stuff on the audience at once.

Worse to come is once Afterlife just settles for rehashing the first movie's climax, complete with Gozer's staircase (which fit in with the architecture of New York City, but looks out of place in a mining shaft in Oklahoma) and, yes, the return of the three surviving members of the original Ghostbusters. They show up, rehash their lines ("Are you a God?"), it's not great. The biggest deviation here is protagonist Phoebe gets help saving the day from the ghost of Egon Spengler. After initially appearing obscured in silhouette in Afterlife's prologue, a digital version of Harold Ramis is the crux of the climax, including small emotional moments with his Ghostbusters co-stars from 1984 once Gozer is defeated.

I'm sure this scene was done only with the best of intentions, as made clear by the film ending on the text "For Harold" set against a night sky. But intentions are not the same as execution and Afterlife's execution only proves the limitations of fully-digital humans. Entirely CGI Harold Ramis constantly looks off, which is an issue, but not a pressing one when the focus of a scene is on blasting CGI beams of light at monsters. It does become a fatal flaw, though, once Afterlife decides it wants to use the character for tender emotional moments that fall flat. The lack of believability in CG Egon Spengler keeps taking you out of the scene. It's impossible to build emotion around something trying to emulate reality but missing the mark.

Plus, while I'm sure the Ramis family signed off on Afterlife, there's an inescapable creepy factor in reviving dead actors through CGI duplicates. Ramis cannot live on through his wonderful works like Groundhog Day or how he impacted other people. He must literally be resurrected so that a big Sony Pictures blockbuster can deliver as much nostalgia as possible. Just redoing the first movie's climax and the use of CGI Harold Ramis epitomize how Ghostbusters: Afterlife eschews interesting original concepts for an ending that's all about suffocating moviegoers in the familiar.