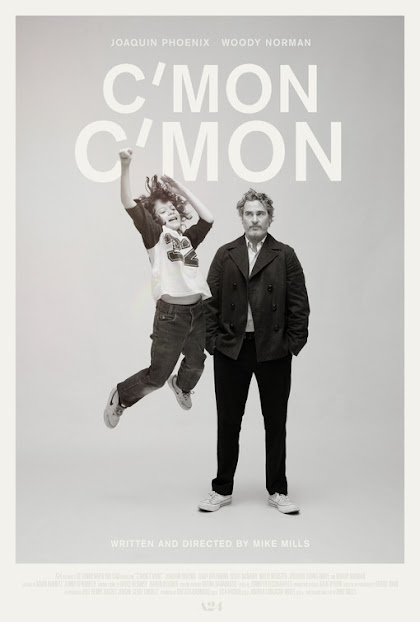 The last two movies from writer/director Mike Mills were Beginners and 20th Century Women. Though telling different stories, they were both like watching memories of the past. Mills used cinema to make viewers nostalgic for a past they never even experienced. His newest feature, C'mon C'mon, is a touch different. It's more akin to watching the creation of events that will become memories. Telling the tale in a monochromatic color scheme and utilizing real people, rather than professional roles, for certain roles heightens the realism of the proceedings. This unique flourish ensures that C'mon C'mon isn't a rehash of prior Mills works while maintaining the director's enchanting empathetic gaze.

Johnny (Joaquin Phoenix) works as a documentary journalist, an occupation that keeps him busy enough that he doesn't have time to linger over how his relationship with his sister, Viv (Gabbie Hoffman), has deteriorated over the last year. Ever since their mom died, Johnny has been M.I.A. from Viv and her son Jesse (Woody Norman). When Viv is forced to help take care of Jesse's mentally ill father, though, Johnny will be called down to Los Angeles to look after a nine-year-old he barely knows. Parenting is not Johnny's strong suit and this quiet man seems like the opposite person that could get along with such a rambunctious youngster. But through spending time together, Johnny and Jesse may find more common ground than they would initially imagine.

That plot may make it sound like you know where C'mon C'mon is going, but the ingenious stroke that Mills brings to this project is by making the gradually deepening bond between Johnny and Jesse something that happens almost incidentally. Grand revelations and inspirational quotes fit for a social media post are not what bonds this duo. Instead, it's simpler acts. The simple act of listening and being there for somebody, rather than figuring out solutions to life's harshest problems, is what builds a bridge between two disparate humans. To quote 20th Century Women, "Some just can't be fixed. Just be there." That's the crux of C'mon C'mon.

Mills explores this idea and the relationship between Johnny and Jesse in an unhurried manner and with an emotionally empathetic eye. There isn't a character captured by the camera who isn't given some extra layers of nuance or sympathy. This includes Viv herself, who is a welcome rebuke to typical film depictions of single moms. Fully open to Johnny that she often doesn't know what to do with her kid, Mills frames Viv as a person who isn't solely defined by motherhood and as someone with relatable flaws. She may not have the most screentime in C'mon C'mon, but Viv is a microcosm of the deeply affecting and kindhearted vibes the production is throwing out.

The empathetic nature of the production is further reinforced by how many different perspectives are incorporated throughout C'mon C'mon. Deeply personal writings from various lady authors (including Kirsten Johnson!) are narrated by Johnny throughout the film and lend insight into the nuances of situations like growing up in a family with a bipolar loved one or the unfair expectations society puts on mothers. These writers are not featured in the story, but they simultaneously flesh out the people in this film while reinforcing how they're not alone in their struggles. Meanwhile, all through the movie, Johnny interviews kids who aren't actors. These are real people from everyday reality who get to express their perspectives on matters like the future in a big theatrical release. These youngsters get treated like the people they are, a gesture reflecting the understanding nature of C'mon C'mon.

Being cognizant of the larger world Johnny and Jesse inhabit also informs recurring cuts to random shots of bustling city life. Cars piled onto an L.A. street or sheets of snow covering packed New York walkways, these provide a discernible contrast to the intimate exchanges between the two central characters. Not only that, but they see Mills subtly reminding the viewer that, contrary to what Johnny and Jesse feel in their most emotionally vulnerable moments, they're not alone in this world. There are other people out there. All with dreams, worries, concerns. Whether it's through interview segments or just in establishing shots, C'mon C'mon reinforces this notion in an affecting manner.

Even with the repeated references to other people, though, C'mon C'mon is, first and foremost, the story of Johnny and Jesse's unexpected friendship. This dynamic allows the two lead performances of the piece to excel, with Joaquin Phoenix reaffirming his gift for playing everyday human beings with a deft touch. There's as much detail here as his more showy performances, but it never intrudes on the realism of his on-screen work. Woody Norman, meanwhile, does a phenomenal job handling such hefty material and conveying the sense that we're watching a real kid and not a precocious Hollywood approximation of a smart-alecky youngster. The best performance in the movie, though, belongs to Gabbie Hoffman. She delivers her scenes largely alone in an empty room or a car, yet she wrings so much humanity and emotion out of her screentime. It's quite an incredible turn that I haven't been able to stop thinking about.

C'mon C'mon doesn't quite reach the heights of 20th Century Women in the filmography of Mike Mills, but that's such a high bar to clear. A new Beatles album is not inherently bad just because it doesn't exceed the quality of Sgt. Pepper's Lonely Hearts Club Band, and so too is a new Mills feature worth seeing just because it doesn't beat out the director's greatest directorial effort. In fact, C'mon C'mon is quite a remarkable film. Here we have a quiet hangout feature that glides along on small moments of human connection and quiet empathy, all while imparting the importance of just listening to other people. I came out of this movie smiling, my heart warmed, and a few tears poking out of the corner of my eye. I imagine you'll feel the same way.

Posted by Douglas Laman (NerdInTheBasement) at 8:35 AM