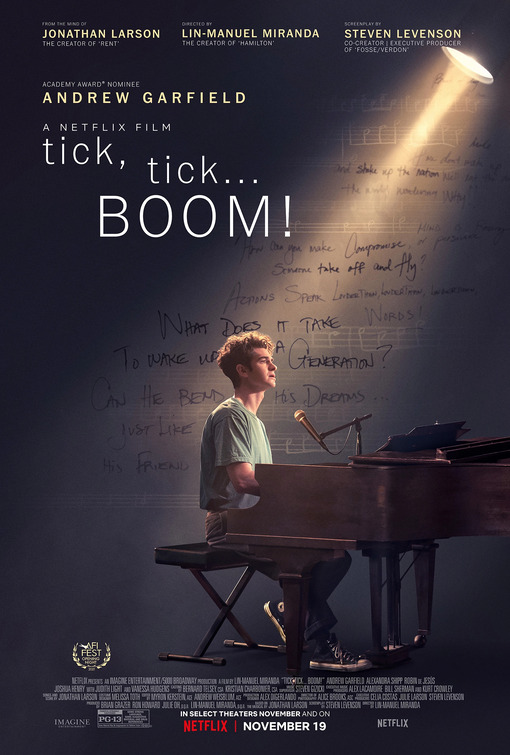 They're all one and the same in Lin Manuel-Miranda's feature film directorial debut Tick, Tick...Boom! Adapted from a stage show that initially debuted as a 1990 Off-Broadway production before becoming a 2001 musical, this production covers the life of Jonathan Larson. The Pulitzer Prize-winning playwright was responsible for the transformative show Rent and also died from a sudden medical emergency the night before that musical's first performance. Larson has long cast a wide shadow over the history of musical theater ever since his passing. In Tick, Tick...Boom!, Larson is depicted as a man, one whose story is told through means as unorthodox as they are emotionally devastating.

The structure of Tick, Tick...Boom! begins with Larson (Andrew Garfield) speaking behind a piano with only a handful of singers accompanying him. As he begins to deliver tunes commenting on his passions and past, we flashback to Larson at the age of 29, just days away from turning 30. He's got his first-ever workshop presentation of one of his original works...and it still needs a critical song. Plus, he's struggling to figure out what his future is with his girlfriend, Susan Wilson (Alexandra Shipp). Don't forget his youth will vanish the moment he turns 30 years old. The seconds of life are ticking away and Larson just wants to fill up every minute with accomplishing...something!

The layout of Tick, Tick...Boom! is dense on paper, oscillating between a stage performance, reality, and examples of heightened reality for big splashy musical numbers. In execution, though, it all runs as smoothly as a long-running train schedule. Part of what helps is that screenwriter Steven Levenson doesn't hold the audience's hand in the shifts between different points of time. The focus remains on how the variations reflect Larson as a person, not on beating the audience over the head with exposition. Trusting the viewer's intellect pays off in dividends and, among other positives, allows us to get inside the mind of Larson.

Levenson and Miranda find such creative ways to translate Larson's original musical into a feature film. My initial concerns over how Miranda, particularly, would translate to directing something in the medium of cinema quickly vanished. The heart of Larson's original words remain, but they've now been filtered through a lens that could only be achieved through film. An argument between Larson and Wilson that darts back-and-forth between raw dialogue and a restrained musical number, for instance, would be much harder to pull off on stage, especially the dissonance between the backdrops in the disparate locations. Ditto a recurring visual motif where visions of the distant past are rendered through camcorder footage, which initially proves amusing before getting used for emotionally devastating results.

Speaking of which, the poignancy in Tick, Tick...Boom! may be the movies greatest asset. Both the character-focused nature of Larson's original story and Miranda's willingness to embrace overt depictions of vulnerability means that the inherent melancholy of the story just breaks your heart. From the get-go, the viewer is informed that Larson won't live to see the first performance of Rent while the story also kicks off fully cognizant of the ongoing AIDS crisis at the dawn of the 1990s. With these elements established, a consciousness of mortality is ingrained directly into the vein of this story. No wonder Larson is worried about there being no tomorrow.

The finite nature of existence is put to especially great use in Why, a musical number that leans on just camcorder footage from years gone by and Larson singing at a piano about his friendship with Michael (Robin de Jesus). The restraint in the instrumental accompaniment and even in the visuals seen on-screen leave the focus on the emotionally raw lyrics and the equally powerful vocals of Garfield. It's such an ingeniously written song, particularly in how the rhyming parallels in each verse convey how there's always this connection between Larson and Michael no matter what chapter of their life they're in. Whether they're performing at the local YMCA as kids or being adults in New York City, the deep bond between the two is communicated in terms of emotionally stirring you can't help but sob.

Garfield shines in this scene and all throughout Tick, Tick...Boom! Initially, I had my hesitation about his performance, with my concern being that his penchant for over-the-top acting tics (remember his Huckleberry Hound impression in Hacksaw Ridge?) would make this version of Larson impossible to be around. Those thoughts of uncertainty quickly vanished thanks to how well Garfield uses the maximalist nature of Larson to conceal a wounded soul. He knows when to play things subtle, and when he does, it's downright impressive. Also standing out in the cast is Robin de Jesus's magnetic turn as Michael while it's wonderful to see that Alexandra Shipp can sing.

Of course, Tick, Tick...Boom! has moments where, as a whole movie, it flubs its lines or misses it cues. Some ham-fisted dialogue about how "there's only one Jonathan Larson" feel too on the nose and hagiographic for a movie that gets so much emotional power out of rendering this late artist as a complex human being. Meanwhile, Miranda's weakest parts as a filmmaker come in his use of green-screen backdrops for two big musical numbers Sunday and Come to Your Senses. The live-action actors just don't look right against these environments and it proves distracting from the exceptional vocals. It's also puzzling why digital backdrops had to be used for these set pieces since neither of them occupies spaces that couldn't be created through practical sets. And, of course, there are moments where centering heavily involving the AIDS crisis on a cis-het man can't help but feel strange, though these are fleeting.

These quibbles aside, Tick, Tick...Boom! is an impressive musical, particularly as a feature film directorial debut from Miranda. This telling of the story of Jonathan Larson will make theater kids everywhere weep for joy, particularly with some of its most star-studded cameos. However, the proceedings are so well-crafted and it's all so deeply moving that Tick, Tick...Boom! will work even for those who have no idea who Larson is going in. We only get so much time on this Earth, but you should totally spend two hours of that finite existence watching a feature as good as Tick, Tick...Boom!

Posted by Douglas Laman (NerdInTheBasement) at 10:19 AM