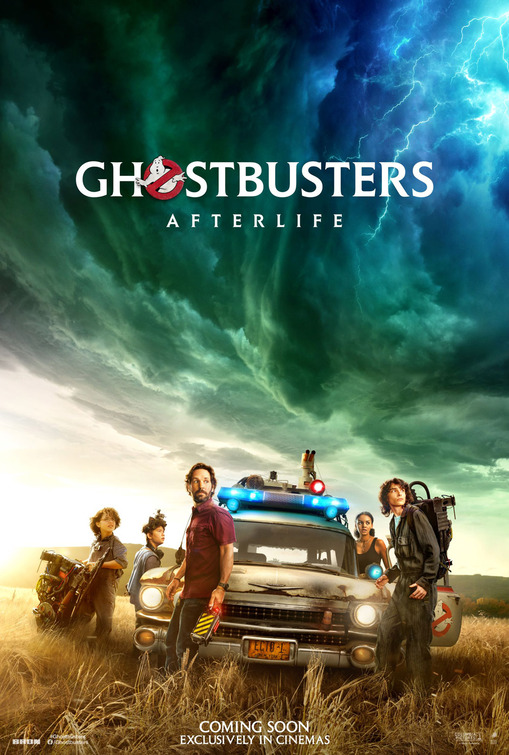 Hollywood has always rehashed familiar brands. Ben-Hur was already adapted twice before the Best Picture-winning 1959 movie hit the silver screen, and The Wizard of Oz also had a pair of adaptations before Judy Garland's Dorothy began skipping down the yellow brick road. Granted, this doesn't justify constant remakes or sequels, especially on the scale Hollywood outfits like Disney engage with them now. But it isn't new for major film productions to retell familiar stories for a new generation. I suppose that means Ghostbusters: Afterlife is keeping in step with Hollywood norms. But did it have to do that in such a frustrating manner?

Phoebe (McKenna Grace), her older brother Trevor (Finn Wolfhard), and single mom Callie (Carrie Coon) have all been evicted from their home and forced to live in a ramshackle old house in Oklahoma that used to be owned by their mysterious absentee grandfather. This guy was such a recluse that the locals took to calling him "the Dirt Farmer". Now it's time for these kids to carve out a new life with that reputation dangling over their heads. Phoebe isn't the best in social situations and Trevor couldn't talk to a girl properly if his life depended on it.

While snooping around her new domicile one day, Phoebe finds some contraptions, including a ghost-catcher, that seemed to belong to her grandfather. It isn't just familial secrets that this kid is digging up, though. With the help of a Ghostbusters-obsessed teacher Chad Grooberson (Paul Rudd) and a classmate named Podcast (Logan Kim), Phoebe begins to uncover something evil that could be lurking underneath her small town. As more and more of the undead begin to emerge, it's time to call the next generation up to save the day.

The best parts of Ghostbusters: Afterlife are the ones that register as trying something new. This includes shifting the backdrop from New York City to a small Oklahoma town. While the setting becomes superfluous once the third act gets up and running, initially, it is interesting to see a paranormal adventure story set against backdrops that could be used in a Sean Baker movie. A scene where Phoebe and Podcast try out a proton pack on some glass bottles in front of an abandoned factory especially gets some subtle mileage out of this locale. Juxtaposing overgrown foliage and run-down buildings with supernatural forces is an interesting mixture visually.

Meanwhile, structuring the story as a quasi-mystery, where pieces of recognizable Ghostbusters iconography get teased around the margins, doesn't totally work in execution. However, the best parts do inject a sense of historic importance into details from a goofy comedy franchise and it does work at providing a different storytelling template from the prior three Ghostbusters installments. A big mid-movie set piece where Phoebe, Trevor, and Podcast (plus a little BB-8-esque mobile version of a Ghost Trap) chase after newbie ghost Muncher will probably be a hit with the kids, and why wouldn't it be? It's decently filmed, the design of Muncher is cool (I love how many legs he has!), and features youngsters like them chasing after a ghost. It delivers just what a new Ghostbusters movie should for a new generation of moviegoers.

Unfortunately, Ghostbusters: Afterlife transitions in its final half-hour from a passable Amblin knock-off to being just a rehash of the first Ghostbusters movie. If you've seen the climax of that movie, you've seen the finale of this one, only this time the Terror Dogs are rendered through underwhelming CGI. The promise of anything new has faded away, even the Oklahoma setting could now be swapped out for any other location on the planet. There's no rhyme or reason for why things begin to happen, it's just a barrage of disparate pieces of CGI and fan-service searching for a movie to inhabit. None of it is fun or exciting enough to excuse both the disjointed and derivative nature of everything.

Movies like Creed expertly doled out references to the past to show how far their new characters had come, to provide a satisfying blend of the past and the present. Ghostbusters: Afterlife, meanwhile, is just sad in how it surrenders its brief bursts of original creative instincts in favor of delivering images that seem tailor-made to be nothing more than people's social media profile backgrounds. Even the delivery of Ray Parker Jr.'s original Ghostbusters theme over the credits exemplifies an over-reliance on the past. Heaven forbid we do a new cover of the song featuring modern artists that kids are attached to. Long live the old flesh!

Of course, even before Ghostbusters: Afterlife becomes an extended example of why it's not always a good idea to just give the fans what they want, it's still got serious problems. For one thing, Reitman and Kenan's script kept jolting me out of the movie by reminding me of other pieces of pop culture, including one emotional beat lifted straight from a season six episode of The Simpsons. Even before the climax arrives, Ghostbusters: Afterlife is too often a hodgepodge of other movies. This is also seen in everyone is always talking in wry quips. It's nice that this film is actually a comedy contrary to its somber marketing, but did so many of the gags just have to be sarcastic retorts?

Meanwhile, Afterlife doesn't look great in terms of camerawork. Reitman previously used 35mm film to great effect on modern projects like Young Adult. If they were going full nostalgia, why didn't they film Afterlife in the same 35mm format as its predecessors? At least the proceedings could've looked crisper than they do in the final cut. Certain scenes, like a Carrie Coon/Paul Rudd rendezvous in the desert or a run-in with ghosts at a Wal-Mart (wow does this stores aesthetic look so ugly on the big screen), end up looking like segments from a fan film thanks to the combination of digital photography and ultra-bright lighting.

If the hoots and hollers at my press screening are any indications, Ghostbusters: Afterlife will probably end up pleasing people and that's totally fine! Certainly, it's not a painful movie to watch, I'd imagine it'll work fine for people just looking for some gags and ghosts after stuffing themselves full on Thanksgiving. But the fleeting moments of originality in Ghostbusters: Afterlife just made me wish Reitman and company could've followed those creative instincts more often. By the end, Afterlife approaches levels of obvious fan service that haven't been seen on movie theater screens since Chewbacca got a medal at the end of The Rise of Skywalker. This isn't so much a passing of the torch as it is a bunch of people trying desperately to keep a flame of the past lit.

Posted by Douglas Laman (NerdInTheBasement) at 10:58 AM