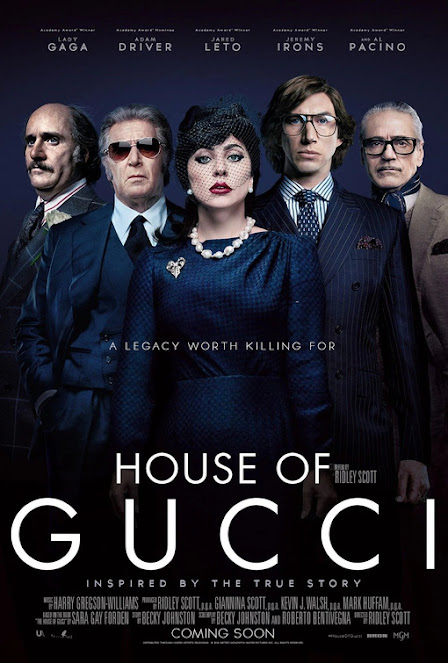 Ridley Scott is not the first name that comes to my mind when I think of filmmakers who indulge in campy material. After all, what in films like Body of Lies or Exodus: Gods and Kings suggested goofy fun? But then I remember scenes like the infamous Cameron Diaz windshield scene in The Counselor or the playful sexual undercurrent of the "I'll do the fingering" scene from Alien: Covenant. Scott won't inject these elements into every movie he does, but when a film calls for it, he's still capable of reveling in the ludicrous. That's a talent put to very good use on the crime drama House of Gucci, which is full of accents as grandiose as the real-life story they inhabit.

Patrizia Reggiani (Lady Gaga) was living a simple life working for her father's construction company when one party led to her crossing paths with Maurizio Gucci (Adam Driver). He belongs to the Gucci family, who run a fashion empire of the same name. Here was an aspiring lawyer who wanted nothing to do with the Gucci's or their power. The duo quickly fell in love and their early scenes together establish how screenwriters Becky Johnston and Roberto Bentivegna will be taking a maximalist approach in telling this tale. How do men express playful fondness for each other? By dousing each other in water from a hose while an Italian cover of I'm a Believer plays. Meanwhile, the first big sex scene between Reggiani and Gucci is played as big as the fiery passion that exists in each of their hearts.

As Reggiani and Gucci tie the knot, Aldo Gucci (Al Pacino), the head of the Gucci corporation, begins to take a great interest in his newly-wedded nephew. This is where the conspiracies and betrayals begin to come into play, as Aldo has his reasons for strengthening the bond between himself and Maurizio. Meanwhile, as they get more and more influential within the Gucci organization, Patrizia and Maurizio have their agendas at play, ditto outcast Gucci relative Paolo Gucci (Jared Leto). What started as a simple romance will turn into a reflection on how greed corrupts all that can only end in bloodshed.

House of Gucci is another recent Ridley Scott film (following The Counselor and All the Money in the World) about all the things that money doesn't buy. All those dollar bills and pretty houses look nice on postcards, but Scott keeps returning to the idea that all those objects can end up leaving one with an empty life. This theme gets explored to an especially interesting effect in House of Gucci as an assortment of characters keeps working overtime to backstab each other only to end up going backward in life. It's not the first movie to touch on this idea, but the concept of corrupt rich people erroneously thinking they're exempt from the traitorous behavior they've inflicted on others, that's always entertaining to watch when executed properly.

Luckily, House of Gucci is very much executed properly, especially since Scott wisely hands over much of the film to the actors. This is a movie fit for people who love to chew scenery, where the characters are as oversized as the unbelievable act of betrayal they exact on others. A terrific cast has been assembled to live up to those stylized means, including Lady Gaga in the lead role. She starts her performance at a 10 in terms of energy and spunk and she just keeps going up, up, up from there. She's a riot to watch, but it's a credit to Gaga that her work rarely comes off like a simple caricature, There's thought going into this performance, while the way she manifests Reggiani's moments of pain or heartbreak does register as distinctly human.

The biggest surprise of the movie, for me at least, was Jared Leto, an actor who I've been open about not liking in the past. His insistence on big "transformations" and "method acting", not to mention his penchant for obliviously goofy schtick, feels like a distraction in other movies. But here, he's found the perfect vehicle for his eccentricities as a performer. House of Gucci calls for performances like Leto's, he fits the aesthetic of the production rather than distracting from it! Even better, he's actually funny in his frantic delivery of lines like "You lying sack of potatoes!" Al Pacino and Jeremy Irons turn in reliably effective turns in the supporting cast. As for Adam Driver, he's handling the most subdued character in the story, yet he manages to not get drowned out by his co-stars. Instead, Driver finds clever subtle ways to reinforce Maurizio's personality, in the process making sure his role stands out in its own way.

House of Gucci is a performance-driven movie, first and foremost. That's primarily a treat given how everyone delivers the sort of maximalist turns you'd want from a project like this. The one drawback to that emphasis is that Scott's direction does sometimes feel too detached for its own good. At his best, Scott knows when to get out of the way of people like Lady GaGa and not let the camerawork distract from their performances. However, there are certain scenes that could've used more lively choices in terms of direction and choices. There are a few too many conversations leaning just on medium-shot/reverse-medium shots in here. Surely a balance could've been struck with more creative visual choices in these scenes that didn't disrupt the performances.

Its cinematography and direction aren't as distinct as its performances, but House of Gucci delivers where it counts in terms of providing a consistently entertaining crime thriller. Ridley Scott and this cast choose to embrace the unabashedly hammy doesn't just create lines that will be widely-spread memes before the years over. It also perfectly captures the inherent ludicrousness of the wealthy. The underlying significance of the choice to play things so over-the-top is felt whenever House of Gucci hauntingly leans into the inherent emptiness that lies in pursuing only money or power. It isn't any fun to live a life of treachery and internalized anguish, but it is certainly fun to watch a movie like House of Gucci.