Belfast isn't quite as a personal as it should be 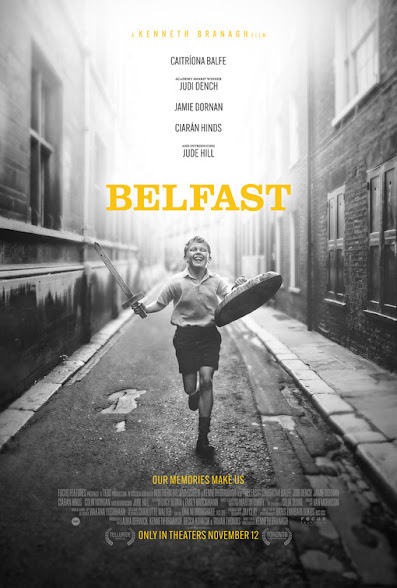 The career of Kenneth Branagh is a strange one. For his first 20 years as a director of feature-length films, he primarily concentrated on directing big-screen adaptations of stage plays (largely the works of William Shakespeare), with only occasional digressions from this mold with films like Dead Again. Then along came the 2011 film Thor, and suddenly, Branagh had found a new career path. He was a journeyman director for big-budget American movie adaptations, projects like Jack Ryan: Shadow Recruit, Murder on the Orient Express, or Artemis Fowl. After a career largely built on following the stories of others, Branagh has crafted an original film inspired by his own childhood with his latest directorial effort, Belfast.

Taking place in Branagh's home country of Belfast, Northern Ireland, Belfast follows the exploits of Buddy (Jude Hill), a kid who is roughly the same age as Branagh was in the fateful year of 1969. While Americans were going to the Moon, Buddy and his family, led by his unnamed mother (Caitríona Balfe) and father (Jamie Dornan), are just struggling to get by. Their neighborhood is being rocked by The Troubles, a real-world event that most prominently impacts Buddy and his neighbors through angry Protestants rioting over the nearby existence of Catholics. Meanwhile, exorbitant rent and tax problems keep the family weighed down by financial problems. Plus, Buddy's got his own seemingly world-shattering issues to deal with, like a crush he's formed on a lady classmate or his difficulty getting a good grip on those pesky division problems.

Branagh's screenplay is juggling a lot, as made apparent by an opening scene depicting Buddy's tranquil home life that gets abruptly upended by the sudden presence of rioters, who turn a happy-go-lucky street into a war zone. The sudden tonal shift here sets the stage for what's to come in Belfast, as plenty of other scenes oscillate quickly from being cutesy to tragic to scary in an instant. Despite how often Branagh wants to engage in veering from one mood to another, the best scenes of Belfast are the ones that remain slow and steady. Unsurprisingly, Branagh, who has extensive experience directing dialogue-heavy movies, excels in capturing mundane conversations between Buddy and his relatives.

Jude Hill engages in a realistic rapport with his loved ones, particularly his grandma and grandpa, played by Judi Dench and Ciaran Hinds respectively. Any scenes involving the elderly members of Buddy's family imparting stories or wisdom to this youngster are the highlight of Belfast. Hinds and Dench convey years of experience but also engaging warmth in their screen presence. The duo also captures a touching sense of melancholy over knowing their time on this Earth is finite. Being unable to speak this truth aloud around a small child does this poignant part of Belfast a lot of good. Restraint just makes the underlying temporary nature of these characters feel all the more potent.

Unfortunately, Branagh is less consistently adept whenever Belfast expands its scope beyond the breakfast table at Buddy's house. Scenes depicting rioting or tanks marching into Buddy's neighborhood are captured with choppy camerawork and editing that, unfortunately, suggest Branagh hasn't made much progress with capturing frantic human behavior since his disappointing work on the action scenes in Thor. Even a tender song-and-dance moment between Buddy's parents in the climax of Belfast gets undercut by how Branagh just can't keep the camera still if the characters are engaging in actions more active than sitting still.

Meanwhile, over-the-top visual flourishes like slow-motion also stick out as strange artifacts that don't fit the tone of Belfast at all. It's impossible to know if this was the intention or not, but the distracting quick cuts and use of slo-mo give off the impression of Branagh getting worried that audiences would get restless in a slow-paced personal piece built on conversations and not explosions. Speaking of distractions, the use of pop culture rooted in the world of 1969 has varying degrees of effectiveness. The worst of these, like a ham-fisted High Noon tribute, takes one right out of the world Belfast is trying to build up. The most compelling moments in the film tell the horrors of The Troubles directly through the eyes of a child. Scenes like the High Noon pastiche, meanwhile, undercut the personal nature of that perspective.

Though the direction of Belfast on a visual level isn't quite top-shelf, Branagh does remain strong when it comes to handling actors. To be sure, Hinds and Dench are the highlights of the film, but Jude Hill does some of the best work in Belfast in terms of channeling reality. His messy response to the potential prospect of moving, for instance, effectively evokes how real children behave, while Hill has this great deers-in-a-headlight expression that tugs at your heartstrings whenever Buddy gets in trouble. I wish Buddy's parents had more personality in the screenplay, but Balfe and Dornan still turn in commendable work in these roles. Hopefully, Belfast and Barb and Star go to Vista Del Mar both indicate that all movies Dornan appears in from now on will involve the dude singing.

Belfast doesn't quite work like it should. The thinly-sketched nature of certain characters (including Buddy's parents) and relying too much on pop culture references are just two ways this personal passion project isn't, well, personal enough. Branagh may be drawing on his own childhood for this story, but his execution of that story echoes too many other movies without carving out its own personality. But the intimate scenes here do carry the kind of specifically-defined spirit this story calls for. The most poignant moments and all-around great acting in Belfast make this an improvement over most of Branagh's works in the last decade. It's not his best film or as good as it could've been, but going for a smaller film like Belfast has certainly led Branagh in more interesting creative directions than (shudders) Artemis Fowl.