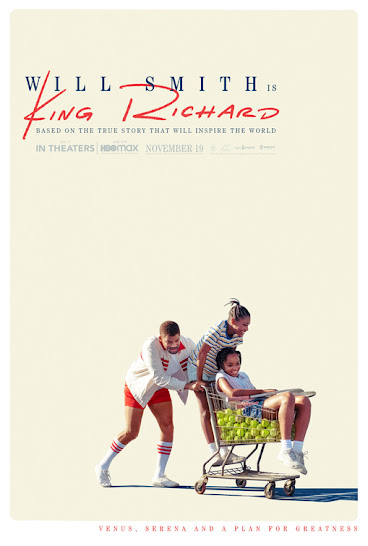 It was only a matter of time before tennis legends Serena and Venus Williams got their own inspirational sports movie. How could they not? The duo's upbringing and sports victories (not to mention being the two top tennis players on the planet at one point) sound like ideas someone would suggest for a fictional sports tale, not real-world events! That inevitability has come to pass with King Richard, a new feature from Monsters and Men director Reinaldo Marcus Green. However, Venus and Serena, while prominent characters here, are not the protagonists of King Richard. The title gives it away that the center of the proceedings is the father of the two women, Richard Williams (here portrayed by Will Smith).
Growing up in Compton, Richard Williams has worked overtime to care for his five daughters, including Venus (Saniyya Sidney) and Serena (Demi Singleton). The duo's passion for tennis has led Richard to map out an elaborate plan for their lives, which entails them becoming the biggest stars in the sport. Getting the proper tools they need, though, is tough, given that the family has constant money issues and that Richard can never seem to get a professional coach to help them. Guidance from Paul Cohen (Tony Goldwyn) seems to be heading the youngsters on the right path, with Venus emerging as a potential titan in the ITF Junior Circuit of tennis games. But Richard's hesitation to see his children go pro, though born from the best intentions, is providing extra headaches all around, including for Venus.

If there's one problem King Richard struggles with, it's figuring out why this story is about Richard rather than Venus and Serena. The two future tennis stars are quite interesting characters as framed here, to the point that it occasionally feels frustrating that they have to be pushed to the background for many scenes. I wanted more time to explore their headspace and especially their relationship with their other three siblings. It's not that Richard Williams doesn't have an interesting story to tell. It's just that screenwriter Zach Baylin can't quite make that saga, in this context, compelling enough to quelch queries about why Venus and Serena aren't center stage in a movie ostensibly about their rise to tennis glory.

This depiction of Richard Williams also struggles to fit into the tonal confines Green and company want to create for King Richard. The ambiance of the production aims somewhere towards an early 2000s Disney sport movie, like Miracle. That's a perfectly acceptable trajectory considering that mold did yield some quality movies. However, in execution, the film struggles to fit a complicated figure like Williams into an aesthetic that's trying to be simplified enough to function as a crowdpelaser. This results in moments like a tense confrontation wth Oracene Price (Aunjanue Ellis), the man's wife, where she reveals troubling moments of his past, which should leave an impact. But they've been reduced to just offhand comments in an argument, rather than moments of on-screen action that would be truly meaningful. In an effort to make sure Richard Williams can fit into something more cookie-cutter, King Richard ends up suffering from a tell-don't-show problem.

While these narrative issues are puzzling, the good news is King Richard still hits a birdie over the net (hey, I know tennis lingo!) simply by functioning as a solid sports drama. It's formulaic, sure, but formula when done right can be just fine. The best parts of the story, in fact, are when King Richard aims to just do a traditional underdog sports tale, particularly in its final 40 minutes when Venus Williams begins to play in some pro games. Green knows just what beats to hit here, including in repeated instances of Venus's family supporting her no matter what and in a unique definition of what "victorious" means.

It also helps that the performances in the picture are uniformly great, including Will Smith in a transformative turn as Richard Williams. There are moments when Smith lapses into a caricature, but most of the time, it's starting just how well he sheds his traditional movie star persona for someone that's got equal measures of confidence and torment lurking in his eyes. Aunjanue Ellis may have been even more impressive to me, though. She just captivates your attention even when Smith is on screen and I appreciated how just the aura she conveys as Oracene Price makes it clear where her daughter's tenacity comes from. Standing out in the supporting cast is Jon Bernthal as Rick Macci, a real-life figure whose so drastically different from Bernthal's other characters. Usually known for playing grizzly tough guys, Bernthal here is a soft-spoken fellow with a kind heart. He's wholesome rather than deadly.

King Richard doesn't rewrite the sports movie playbook and its script sometimes struggles with properly realizing its own title character. But its most stirring moments and memorable performances do help it score some pretty important points. If sports movies are your bread and butter, you'll probably get won over by King Richard. Meanwhile, even those who aren't ardent fans of the genre will find themselves impressed by the work by performers like Smith and Ellis. It was only a matter of time before Venus and Serena Williams got a sports biopic of their own. Though not as good as it could've been, King Richard is still a perfectly fine movie to become a part of the duo's towering legacy.