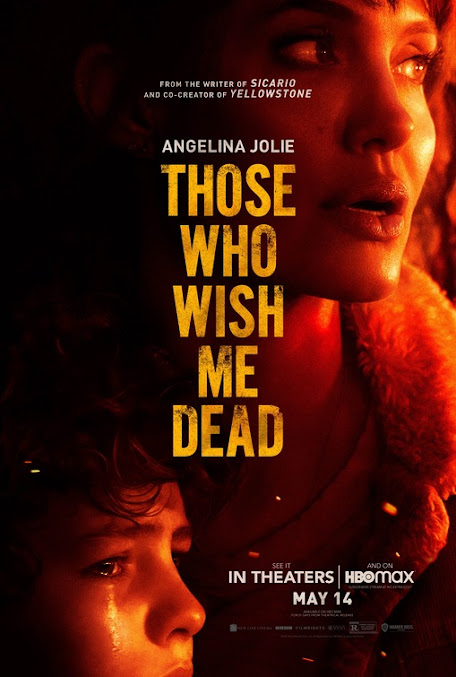 Hannah Faber (Angelina Jolie) is coming to terms with a recent tragedy. She's a smokejumper who, on a recent mission, had to watch the deaths of three kids and a fellow smokejumper. Losing those people to the fire keeps her up at night and, in response to this recent event, she's been assigned to oversee a remote fire lookout tower. It is here that she crosses paths with Connor Casserly (Finn Little). This kid is on the run from a pair of henchmen (Aiden Gillan and Nicholas Hoult) who want to murder Casserly after his now-deceased father gave him valuable information that could lead to the incrimination of some high-profile people. Faber may be gripped with fear over the past but she's going to need to muster up all her courage to help save this kid in the present.

Written and directed by Taylor Sheridan, Those Who Wish Me Dead is the latest in this auteur's streak of modern Western thrillers. His previous writing forays into this field include Hell or High Water and Sicario while his previous major directorial effort was Wind River. Those Who Wish Me Dead isn't on par with Sheridan very best efforts, but it's a fine production all the same. It does what it says on the tin, you get Jolie, you get her helping a kid and there's also a wildfire. It never does enough to really elevate itself to something truly exceptional but I found myself being reasonably content with what I was getting anyway.

Sheridan's lack of a desire to take this story into extremely unusual places has its drawbacks but there is an elegant simplicity to certain aspects of the movie. Gillan and Hoult's henchman, especially, are efficiently realized as just sources of intimidation. Reducing the conflict to just these two guys keeps things nice and lean while also giving the audience a chance to real grow accustomed to their presence. Without a dozen other baddies clogging up the screen, both performers can leave an impression much easier. Simple, streamlined, it gets the job done. I can get behind that, especially since Gillan and Hoult have an intriguingly nonchalant rapport as they carry out such ruthless work.

The whole production also allows Angelina Jolie a chance to grab her first non-Maleficent star turn in over a decade. Occasionally Jolie seems either miscast or misdirected, but once it comes time for her to be convincing in suspenseful scenarios, she's proving that she's got her mettle. The best member of the cast turns out to be child actor Finn Little, particularly in how well he sells big emotions without lapsing into a distractingly over-the-top performance. There's a constant sense of realism with Little's turn and it makes him one of the standout members of the cast.

The other standout element of the production is whenever the two principal female characters of the story get their own unique weapons to fight baddies with. Faber gets to spend the climax wielding an axe that ends up coming in very handy. Meanwhile, the pregnant survival expert Allison Sawyer (Medina Senghore) gets the coolest action beat of the whole movie involving some pepper spray and a roaring fire. It's a delightfully grisly moment that, like Faber's obsession with her axe, smartly uses distinct weaponry to both reflect the unique attributes of individual characters and to create memorable fight scenes.

Unfortuntely, the whole production is captured through some really lackluster directing from Sheridan. Because so many scenes are set with human beings standing against a roaring wildfire, Sheridan has to employ extensive green-screen for the first time in his career. Unfortunately, the compositing of these elements leaves a lot to be desired and his visual style isn't much better in the low-key sequences. There's also numerous instances of choppy editing that take you right of the movie. The visual elements are really where Those Who Wish Me Dead comes up short. That's a shame since the rest of the movie is a perfectly acceptable affair that won't leave a sizeable impact but gets the job done while it's playing.

Posted by Douglas Laman (NerdInTheBasement) at 9:05 AM